The stock market was broadly lower on Thursday, as investors reacted negatively to heightened political tensions in Washington, as well as increased pressure on some parts of the high-flying technology industry. Major benchmarks generally declined, but the biggest losses were once again reserved for the tech-heavy Nasdaq Composite, where some of the highest-profile companies in the world have suffered significant drops over the past few days. Yet even in technology, positive earnings reports from some players in the space were able to overcome the general downtrend and push individual stocks higher. Cloudera (NYSE:CLDR), Arrowhead Pharmaceuticals (NASDAQ:ARWR), and MongoDB (NASDAQ:MDB) were among the best performers on the day. Here's why they did so well.

Shares of Cloudera soared 24% after the cloud-computing specialist reported its second-quarter financial results. The company, which has software products to help with data management and machine learning, said that revenue growth was better than expected, led by with an outsize gain in recurring subscription-based revenue. Although Cloudera wasn't able to earn a profit, its losses for the quarter were only about half as big as most of those following the stock had anticipated. Some investors are still nervous that in the ultra-competitive cloud space, it'll be tough for Cloudera to keep rivals at bay. But at least for today, shareholders are excited about the opportunities the company has to take full advantage of the current tech boom. 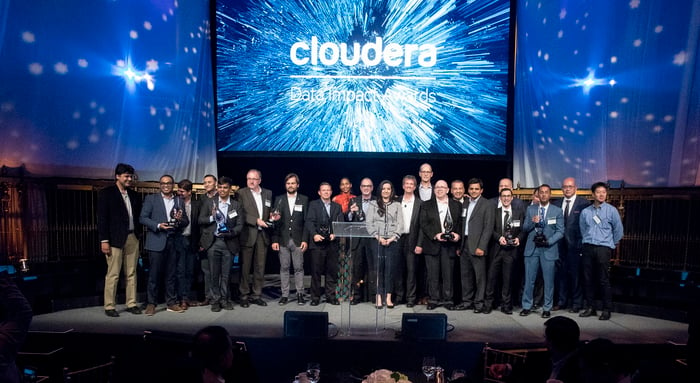 Arrowhead gets a win

Arrowhead Pharmaceuticals stock skyrocketed over 37% in the wake of the biotech specialist's latest clinical trial results. The company said that a phase 1 study of hepatitis B treatment ARO-HBV produced some encouraging results, including extremely large reductions in the surface antigens that indicate active hepatitis B infections. Adverse side effects appeared to be relatively benign, and Arrowhead was pleased at the lack of troubling safety problems that it has encountered with some of its candidate treatments in the past. Arrowhead still has a long way to go before it even thinks about seeking FDA approval for the treatment, but investors are still excited about the data to date.

Mongo has a great quarter

Finally, shares of MongoDB jumped 9%. The database platform specialist said that overall sales jumped more than 60% in the second quarter, with subscription revenue growth posting an even stronger 63% gain. Adjusted net losses were consistent with last year's quarterly results, but CEO Dev Ittycheria pointed to "strong demand from both new and existing customers across a growing number of use cases" as indicating the future potential for MongoDB's services. Today's rise adds to the huge gains that MongoDB has seen over the past month, and investors are enthusiastic about the company's ability to use collaborations and organic growth to capture market share in a key niche of the technology sector.