Dunkin' Brands (NASDAQ:DNKN) appears to have its desired menu strategy in place. After rolling out a systemwide menu simplification initiative in April, the company achieved positive comparable sales in its largest segment, Dunkin' Donuts U.S., during the second quarter of 2018. The "comps" increase of 1.4% against the prior year may seem meager, but it represents an improvement over the negative and flattish results of the last several quarters. More importantly, management has noted that streamlined sandwich stations due to menu simplification paved the way operationally for the company's nationwide "Go2" breakfast value initiative last quarter, the key factor propelling the organization into positive comps territory.

Dunkin' Brands plans to maintain its new value platform in its U.S. donuts business indefinitely, as the segment is experiencing attractive "attach" rates of higher-margin beverages alongside value orders. In the company's second-quarter earnings call, CEO David Hoffman observed that "[o]ver 75% of these breakfast sandwich transactions contained a beverage, demonstrating the power of compelling value when combined with our beverage-led positioning." This statement also offers some evidence of the company's progress in positioning itself as a "beverage-led, on-the-go" restaurant chain.

Higher throughput and productivity due to the menu simplification, and a well-received value platform with valuable beverage attachment, indicate that Dunkin' has hit a revenue sweet spot. Yet the company continues to face the industrywide headwind of declining guest counts. Dunkin' Donuts' U.S. comps in the second quarter rose only as a higher average ticket offset decreased traffic. Management believes the company can build on its initial Go2 success to draw in greater customer flow over the next few quarters. 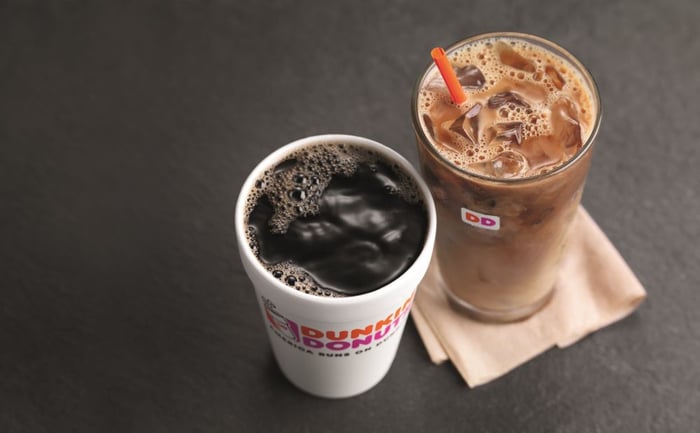 Mammoth competitor McDonald's Corporation (NYSE:MCD) may stand in the way of this objective. The world's largest burger chain has also grappled with traffic declines lately. The organization's U.S. guest counts turned negative for the first time in a year during the second quarter of 2018. The company's own management team is fiercely committed to winning back unaffiliated value-seekers. In the excerpt below from the company's second-quarter earnings call, McDonald's CFO Kevin Ozan neatly sums up management's thoughts on value offerings:

As we've said in the past, we must be competitive on value. We don't strive to win on value, but we won't lose, either. With a sluggish IEO [informal eating out] market and the introduction of our $1 $2 $3 Dollar Menu at the beginning of the year, we've seen our competitors increase their attention on deals. Therefore, we know that we need to be more aggressive to compete effectively. While our $1 $2 $3 Dollar Menu is driving incremental sales and guest counts with our budget basic value customers, we need to do more to attract other customer groups.

Ozan went on to promise that the company would maintain its "everyday value platform" while sprinkling in periodic deeper discount offers.

The problem for Dunkin' Brands is that its Go2 platform, which offers customers two sandwiches for either $2, $3, or $5, is vulnerable to the more assertive one-off deals that McDonald's might introduce within the market to regain its lost traffic.

On a selective basis, McDonald's appears to be mightily determined to wrest back lapsing customers. Users of McDonald's app can now buy at least one sandwich per day for $1 through the end of September, and the list surprisingly includes core sandwiches like the Quarter Pounder, Filet-O-Fish, and Big Mac. Premium sandwiches and double Quarter Pounders are excluded from the deal, which has been active since July; nonetheless, the dropping of core items to dollar status illustrates Ozan's declaration that the company won't lose on value.

A sharper-elbowed McDonald's, bent on pushing back against a raft of value deals by a host of smaller competitors, will potentially have an outsized effect on the quick service industry. This has been the case each time McDonald's has introduced a version of all-day breakfast or launched a new value platform iteration over the last few years. And it muddies formerly clear waters for Dunkin' Brands, which had ostensibly found a successful formula for comps growth.

Ultimately, franchisees determine to what depth value platforms extend. Both companies have assisted franchisees in modernizing restaurants to induce maximum traffic flow. And both companies have benefited from rising franchise fees. McDonald's in particular has seen its operating margin rise to Dunkin' Brands' 39% level over the last three years as it's sold off most of its company-operated restaurants. The open question is to what extent franchisees of either company will continue to stomach traffic growth predicated on successive rounds of value offers.

In sum, next quarter's results for both Dunkin' Brands and McDonald's may reveal continued comps growth, though at the expense of restaurant-level and companywide operating margins in both organizations. The extent to which Dunkin' is forced to respond to McDonald's latest value push -- and future forays -- will reveal how far off course from its current viable menu strategy it's being pushed.