Marijuana stocks haven't felt much love in the past from Wall Street. There's one really good reason why. Until this year, there was only one marijuana stock trading on a U.S. stock exchange -- Scotts Miracle-Gro (NYSE:SMG). And Scotts' primary business is selling lawn and garden products, so its designation as a marijuana stock comes with an asterisk.

Now, however, three pure-play marijuana stocks are listed on U.S. stock exchanges in addition to Scotts Miracle-Gro. Canopy Growth Corporation (NASDAQ:CGC) trades on the New York Stock Exchange (NYSE), while Cronos Group (NASDAQ:CRON) and Tilray (NASDAQ:TLRY) trade on the Nasdaq. But which marijuana stock does Wall Street like the most? 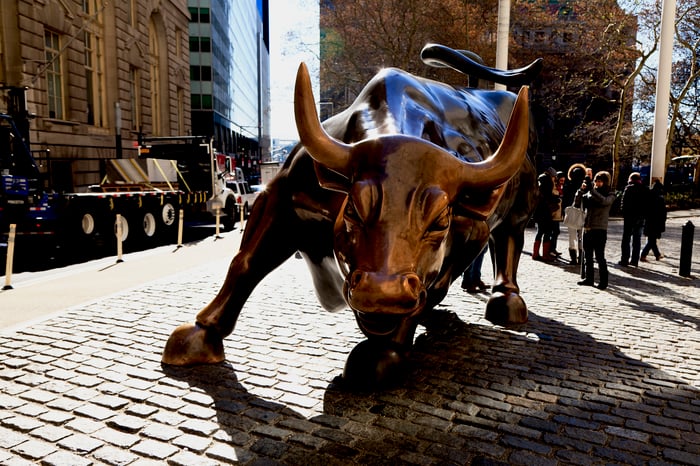 What the analysts say

One way to gauge what Wall Street thinks about a stock is to simply listen to what the analysts of big investment firms say about the stock. For Cronos Group, there's not a lot of chatter. Zacks Investment Research lists two analysts that cover Cronos -- Beacon Securities and GMP Securities. Both are Canadian investment firms, however.

That leaves Scotts Miracle-Gro. Seven firms are listed by Zacks as covering the stock, matching the list provided by Scotts itself. Analysts' views of Scotts Miracle-Gro stock are mixed, however, with two rating it a strong buy, one rating the stock as an "underperform," and two analysts recommending that investors sell the stock.

Where the money's going

Actions speak louder than words. Where the money is going could be a better indication than analysts' recommendations of which marijuana stock Wall Street likes the most. It's certainly a better clue as to which stock institutional investors prefer the most.

Tilray wins hands down in terms of stock price momentum. Over the last month, Tilray's share price has nearly quadrupled. Cronos Group and Canopy Growth have come close to doubling during the same period. Shares of Scotts Miracle-Gro, on the other hand, are down slightly.

Trading volume provides another hint about the enthusiasm for a stock. Cronos Group takes the prize on this front. The 30-day average daily volume for Cronos has skyrocketed to more than 15 million shares. Canopy Growth's trading volume has also soared to a 30-day average daily volume of around 10 million shares. Tilray comes in third place with around half the average volume of Canopy. Scotts Miracle-Gro again ranks the lowest of the group.

It would make sense that Wall Street's favorite marijuana stock would be Canopy Growth. After all, the company claims the highest market cap by far of any marijuana stock. Canopy secured a $4 billion investment from major alcoholic beverage maker Constellation Brands, which is viewed positively by seven of the 12 analysts covering the stock.

But Wall Street analysts appear to be even more bullish on Tilray. Even though Canopy scored the big deal with Constellation, it's actually Tilray that has delivered the better stock performance. I think Tilray, at least for now, ranks as the marijuana stock that Wall Street likes the most.

Why would analysts be more enthusiastic about Tilray than Canopy Growth? I suspect there's a bit of the "buy the rumor, sell the news" dynamic at work. It's not that investors are selling off Canopy stock after the Constellation announcement. However, Tilray is attracting investors' attention because of the potential that it could be the next to land a major deal -- perhaps with Diageo, another big beverage company reportedly looking for a cannabis partner.

Does it matter what the Street thinks?

Should investors care what Wall Street analysts think? Yes and no.

Analysts' opinions can certainly cause stocks to rise and fall. What Wall Street says has the potential to influence a lot of investors. That kind of sway shouldn't be ignored. On the other hand, Wall Street analysts can frequently be wrong, especially about the short-term prospects for companies.

What really matters is what you think about these marijuana stocks, not what Wall Street thinks about them. Unlike analysts, you don't have to focus on the short term. You can evaluate each company's business model, its competitive advantages, and its growth prospects to determine which stock you think will be the biggest winner -- or perhaps even determine that none of them will be successful.

For what it's worth, I disagree with Wall Street's view. I don't think Tilray will be the biggest winner among these four stocks over the long run. And I don't think Scotts Miracle-Gro is the worst of the group, either. In my view, Scotts and Canopy are probably the two best marijuana stocks on the market. Again, though, when it comes to your money, it only matters what you think.