Please ensure Javascript is enabled for purposes of website accessibility
Free Article Join Over 1 Million Premium Members And Get More In-Depth Stock Guidance and Research
By Keith Speights - Sep 11, 2018 at 6:31AM

Don't go all in on annuities or bonds just because you're in your 60s. Stocks historically provide better returns over the long run. And if you're like the average American, you still have a long run ahead of you. 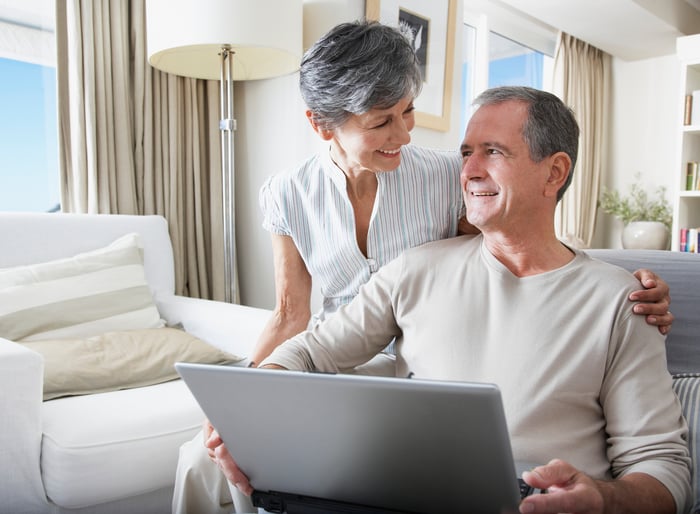 There are two key reasons you should like Alphabet. One is the company's massive cash flow generated primarily by selling advertising on its various platforms, including Google Search, YouTube, and Gmail. Alphabet doesn't use its cash flow to pay out dividends at this point. However, the company definitely uses its cash in other ways that reward investors, particularly through stock buybacks.

The second primary reason to consider buying Alphabet relates to another way it uses its hefty cash flow: investing in developing new technology. Alphabet is famous for its Other Bets business segment. This segment includes an eclectic mix of businesses such as Access, which provides internet and TV services, and Verily, which focuses on using data to improve healthcare.

I think the single most important of these other bets, though, is Alphabet's self-driving car technology company Waymo. You might not think too highly of self-driving cars now, but the opportunity is huge. Driverless cars (including ridesharing services and autonomous trucks) will make up a market that's expected to approach $10 trillion over the next few decades. Waymo is already a leader in the arena and has made significant progress toward building a thriving business.

You won't find many stocks that have performed better than Berkshire Hathaway. Between 1964 and 2017, the stock achieved an average annual gain of nearly 21% -- more than double the return of the S&P 500 Index. Berkshire won't necessarily always outperform the market (it's trailing the S&P 500 a little so far this year, for example). However, I think the stock is likely to continue being a big winner for a long time to come.

One big advantage that comes with buying Berkshire Hathaway is its diversification. Berkshire is a holding company that wholly owns several businesses in a wide range of industries, including insurance, manufacturing, and utilities. The company also holds equity interest in around 40 publicly traded companies, including major airlines, big drugmakers, and large financial institutions.

Should investors be concerned about what might happen with Berkshire when Warren Buffett is no longer at the helm? I don't think so. The Oracle of Omaha has been delegating many key investment decisions to a very capable team for several years. A recent example is Berkshire's investment in India-based fintech start-up Paytm. This move was led by Todd Combs, one of Buffett's top two investment managers. Buffett wrote to investors a few years ago that the company's investments will be "in fine shape for decades to come" with Combs and Ted Weschler, a team that he referred to as "first-rate in all respects."

Alphabet and Berkshire don't pay dividends yet, but Welltower does -- a nice one. I view the healthcare real estate investment trust (REIT) as "a retiree's dream stock," in large part because of its tremendous dividend yield of 5.28%.

Even if you plan to keep working for a while instead of retiring, Welltower is still a great stock to consider. The company owns healthcare properties in the U.S., Canada, and the United Kingdom, including senior housing, post-acute communities, and outpatient medical properties. Welltower's primary focus is on senior housing in major high-growth markets.

Generating income isn't the only plus associated with buying Welltower. The company should enjoy strong growth over the next few decades as baby boomers age. For example, the number of Americans age 65 and over is projected to increase 36% by 2025. There are other healthcare REITs that will also benefit from demographic trends, but Welltower ranks as the best in my view because of its size and its mix of more profitable private-pay and Medicare residents.

Don't stop with these

In my view, Alphabet, Berkshire Hathaway, and Welltower are excellent stocks to buy for investors in their 60s. Don't just stop with these three stocks, though. You'll want to spread your nest eggs across more baskets. The solid business models and strong growth prospects of these stocks, however, are what you'll want to find in any stock you buy.