Value investing sounds easy: Buy stocks that are trading below fair value to profit from their price appreciation in coming years. More often than not, stocks trade at bargain-basement prices because the market is reading too much into short-term challenges even as a deeper dive into the company's fundamentals reveals strong turnaround potential, suggesting the stock is undervalued.

The question is: How do you find such stocks, especially when the broader markets are in a bull run? To help you, we asked Motley Fool contributors to identify one value stock that they believe is worth buying now. Three really interesting names have come up: US Foods Holding (NYSE:USFD), Sanofi (NASDAQ:SNY), and General Electric (NYSE:GE).

Rich Duprey (US Foods Holding): After riding high for the first half of the year, food service supplier US Foods Holding was dealt a harsh blow at the end of July when it reported second-quarter earnings and announced a big $1.8 billion acquisition. Its stock was knocked back about 17% as investors worried about growth.

Sales were flat in the quarter, and case volumes were down almost 1% as a result of losing some restaurant chain customers. To help shore up growth, US Food would buy SGA's Food Group of Companies, a food service company with a large presence in northwestern states, expanding US Foods' coverage of the region. It brings in 33,000 customers and 12 distribution centers, and US Foods expects to achieve approximately $55 million in annual run-rate cost synergies by the end of fiscal 2022. 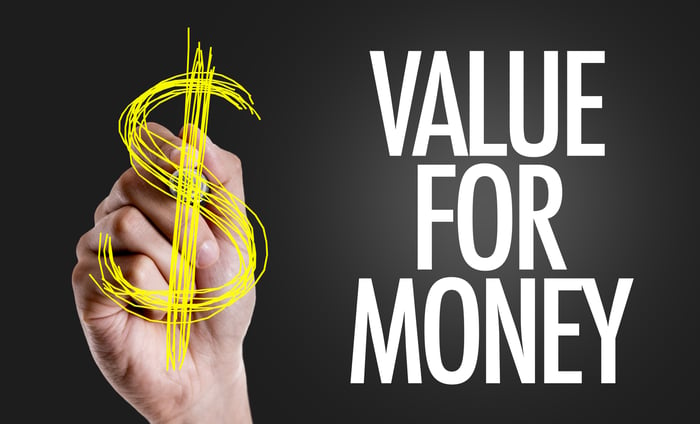 You can always find value stocks to buy, no matter where the markets are. Image source: Getty Images.

Some worry US Foods will only be able to grow by acquisition, and the SGA purchase won't be accretive to earnings for two years. But even before the announcement, analysts were forecasting US Foods would grow earnings by a 27% compounded annual rate over the next five years, well ahead of rivals Sysco and United Natural Foods.

At 19 times trailing earnings and 13 times this year's estimates, US Food Holding stock trades at a very discounted 12 times its free cash flow, suggesting this is a value stock that investors could benefit from buying now.

Look beyond the near-term headwinds

George Budwell (Sanofi): At 11.8 times forward-looking earnings, shares of the French drugmaker Sanofi are certainly a bargain. The pharma titan's closest peers, after all, are all garnering far higher premiums right now. But Sanofi's stock is arguably only worth buying at these levels if you're willing to hold it for at least five years. That being said, patient investors should be richly rewarded for doing so.

The core problem is that Sanofi has yet to get out from underneath the overhang stemming from the patent expiration of its flagship diabetes drug Lantus back in 2015. After all, Sanofi and Regeneron's (NASDAQ:REGN) cholesterol-busting drug Praluent has stumbled out of the gate, thanks to pushback from payers and an ongoing patent dispute with Amgen. The company's decision to pay sky-high premiums for Ablynx and Bioverativ in an attempt to build out a leading blood disorder franchise has also so far failed to solve this underlying problem.

But Sanofi isn't that far off from hitting an inflection point. Its collaboration with Regeneron has already produced three major drugs -- Dupixent, Praluent, and Kevzara -- all capable of eventually generating significant sales in the next decade. And the duo is gearing up to enter the high-growth immuno-oncology space with the checkpoint inhibitor cemiplimab in the not-so-distant future. Sanofi, therefore, should have a number of powerful growth drivers coming online all at the same time.

Perhaps the best part, though, is that Sanofi is literally paying shareholders -- via its top-notch yield of 4.39% at current levels -- to remain patient while its turnaround slowly takes shape. So while this big pharma stock probably won't beat the broader markets anytime soon, Sanofi has been steadily laying the foundation for solid returns on capital in the coming decade, making it a worthwhile value stock to buy and hold for the long term.

This much-hated stock deserves some love

Neha Chamaria (General Electric): Given the skepticism around General Electric that has driven the stock down to multiyear lows, I won't bring up valuation metrics but jump straight to the three reasons I consider GE to be a value buy today.

I think GE is serious about becoming leaner and stronger. It won't be an easy ride, as challenges are still plentiful, but for patient investors who buy the stock while it's still languishing, GE shares could reap solid returns as its turnaround plans take shape.