Between spinoffs, dividends, and the rapid growth of the GE Aviation unit, GE stock could deliver a 100% total return over the next few years.

Shares of General Electric (GE 0.03%) tumbled again last week, briefly falling below $12, a level not seen since the Great Recession. GE stock has plunged more than 60% since the beginning of 2017, driven by losses in the GE Capital unit and plummeting sales and profitability in General Electric's power business.

The storied industrial conglomerate seems to be caught in an endless negative-news cycle. Yet the company's two main profit engines -- its aviation and healthcare businesses -- continue to deliver steady revenue and earnings growth.

Management is just starting to implement a promising plan that will transform GE by radically slimming it down to a few core businesses. Once investors overcome their current skepticism, GE shares are likely to soar, allowing current shareholders to realize a total return of about 100% on GE stock over the next few years.

Large pieces of GE are being sold or spun off In May, GE agreed to merge its transportation business with Wabtec (WAB -0.65%). It then announced in June that it will spin off its healthcare segment as an independent company next year and exit its stake in Baker Hughes, a GE Company (BKR 0.41%) within the next few years. It also hopes to sell its lighting division -- by far its smallest business unit -- although it has struggled to find a buyer.

Meanwhile, General Electric is selling off pieces of its power business. Last September, it struck a deal to sell its industrial solutions unit to ABB for $2.6 billion. That sale closed in late June. It also reached an agreement in June to sell its distributed power business -- which makes gas turbines to generate on-site power -- to a private equity firm for $3.25 billion. Finally, GE is preparing to sell its power conversion unit, which could fetch about $1.5 billion.

A lot of value will be transferred to investors

Under General Electric's plan to slim down, the company is likely to distribute shares of several spinoff businesses to shareholders. First, GE Transportation's merger deal with Wabtec calls for GE shareholders to receive a 40.2% stake in the combined company. Based on the recent Wabtec stock price, that would be worth roughly $8.5 billion, or nearly $1 per share of GE stock. 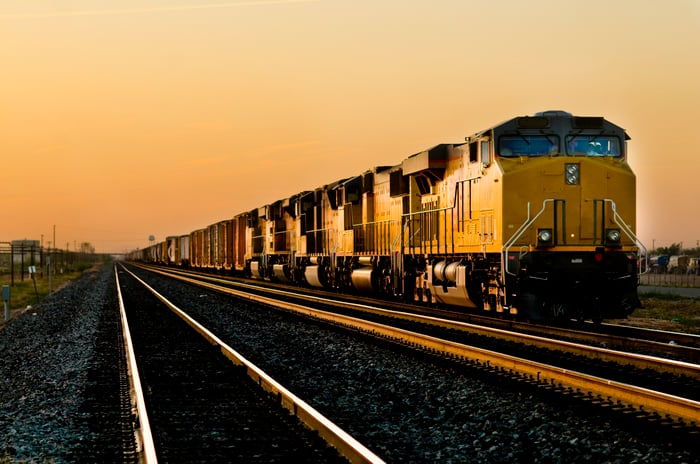 GE also plans to spin off an 80% stake in the healthcare business to shareholders. That stake could be worth about $4 per GE share.

Finally, GE could potentially look to exit the oil and gas business by distributing its 62.5% stake in Baker Hughes to shareholders. The company hasn't decided yet whether it will go that route or whether it will monetize the stake. However, between its other asset sales and spinoffs, GE will generate more than enough cash to achieve its debt-reduction target, allowing it to spin off Baker Hughes if it so desires. Baker Hughes stock has been quite volatile recently, but based on its Friday closing price of $31.01, it is currently worth about $2.50 per GE share.

Thus, if GE shareholders eventually get shares in Baker Hughes to go along with their stakes in Wabtec and the future healthcare spinoff, the total value of the spinoffs will be $7 to $8 per share. In other words, investors are currently valuing "core GE" stock -- what will be left after the reorganization -- at about $5.

The struggling GE Power unit is the company's largest division by revenue, but just barely. The GE Aviation business, which primarily builds and services aircraft engines, has nearly overtaken the power segment in revenue. Moreover, the aviation business is growing quickly and is far more profitable than GE Power.

GE Aviation earned a segment profit of $5.4 billion last year on $27 billion of revenue (under new accounting rules implemented in 2018). Segment profit surged 16% in the first half of 2018 and is set to keep growing quickly for the foreseeable future. Declining production costs for its CFM joint venture's LEAP-series engines and a rising mix of services -- driven by the aging of the installed base of GE and CFM engines -- should lead to further margin expansion.

Importantly, GE Aviation has a roughly $200 billion firm order backlog that is still growing. Thus, much of its growth is already "locked in." Aviation segment profit is on track to double by the mid-2020s. This would make the aviation segment alone worth substantially more than GE's current market cap of $107 billion.

As a result, even if the power and renewable energy segments never rebound much from their current depressed levels of profitability, shares of the "new GE" -- which currently have an implied value of about $5 -- could reach $15 by the early 2020s. Including the value of spinoffs and dividends, that would deliver a total return of about 100% from today. That's why I bought more GE stock last week. If the share price continues to flounder, I will likely continue to accumulate GE stock over the next year.