Video-gaming stocks have attracted the attention of investors as the segment has grown into a massive opportunity. The video-game industry will be worth an estimated $137.9 billion this year, and it's poised to become a $180 billion market by 2021. Blockbuster games can reap rewards for years as the companies that make them sell add-on services and downloads. Additionally, technology companies that make the hardware that make high-end games possible benefit from this industry nearly every time they release new hardware.

To help investors track down some of the top video-gaming stocks right now, we asked a handful of Motley Fool contributors for a few stocks to watch this month. They came back with Advanced Micro Devices ( AMD 0.76% ), NVIDIA Corporation ( NVDA 2.36% ) and Activision Blizzard ( ATVI 0.56% ). Here's why. 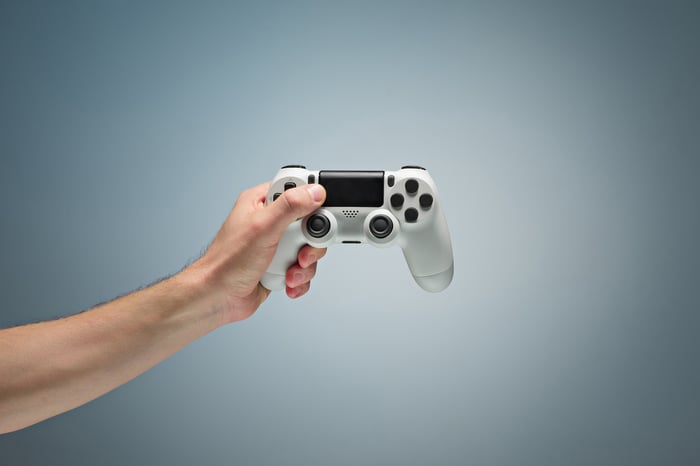 Jamal Carnette, CFA (AMD): In the last year, there's been no tech company with a bigger change in sentiment than AMD. Shares of the company have gone from universally loathed to becoming the next hot stock, with even long-term bears starting to admit they're wrong.

Although AMD is technically a gaming stock, gaming will not the be the biggest driver of future returns. Last quarter, enterprise, embedded, and semi-custom (EESC) revenue -- which includes revenue from gaming consoles -- increased by 37% versus 53% total revenue growth. Computing and graphics increased 64%.

Although computing and graphics (C&G) includes computer GPUs, the biggest reason for the strong return in C&G was revenue attributable to data centers. AMD continues to grow this end market, even stealing market share away from Intel. AMD's strength is its versatility: Look for the company to post strong growth from both gaming and the fast-growing data center segment going forward.

A ray of light

Danny Vena (NVIDIA): When it comes to gaming, NVIDIA is one stock that should be every investor's list. Without the graphics processing unit (GPU) pioneered by NVIDIA, gaming simply wouldn't exist as it does today.

While GPUs used in artificial intelligence (AI) and self-driving cars have been making headlines, it's the chips used in gaming that still pay the bills -- generating nearly 58% of NVIDIA's revenue in the company's most recent quarter. That's not just legacy sales, either. Sales of gaming processors grew 52% year over year, and that's on top of 52% growth in the prior-year quarter.

NVIDIA isn't resting on its laurels; it continues to innovate to remain the top provider of gaming chips. Late last month, the company unveiled processors that could achieve real-time ray-tracing. The ability to recreate how light behaves in the natural world has long been an expensive and unattainable goal in gaming. The process is computationally intensive and not practical for use in real time. That changed last month, when NVIDIA unveiled its Turing architecture, which combines AI and high-speed processors that achieve what many are calling the "holy grail" of graphics.

There are several other trending phenomena that could drive NVIDIA sales higher. The rapid adoption of the battle royale genre, popularized by games like Fortnite and PlayerUnknown's Battlegrounds (PUBG), is widely believed to be bringing new gamers into the fold. Esports is another area gaining popularity, with audiences now approaching 400 million, up 18% over the previous year.

These developments represent significant opportunities for NVIDIA. It will take time for publishers to incorporate real-time ray tracing into their upcoming releases, but if the technology is as good as advertised, it could result in a surge of gamers upgrading to leverage these new capabilities.

When you look at the opportunities presented by AI and autonomous driving, and recent gaming innovations like ray tracing, the battle royale genre, and esports, it's easy to see why NVIDIA should be on every investor's radar.

Betting on the blockbuster games

Chris Neiger (Activision Blizzard): With more than 352 million monthly active users (MAUs) it's hard to beat Activision's reach. The company makes smash-hit games including Call of Duty, World of Warcraft, and Overwatch, and the company's latest earnings release shows that users are generating huge sales for the company.

Activision brought in $1.64 billion in sales in the second quarter, which easily outpaced the company's own guidance of $1.55 billion. The company is not only incresing overall sales, it has also expanded its digital gaming sales. Digital sales are important for the company because they allow Activision to sell new content and services to customers long after their initial game purchase. Digital sales now account for about 76% of the company's total revenue.

Activision's share price has climbed 176% over the past three years, easily outpacing the S&P 500's gain of 47%. While there's no guarantee that the company's share price will continue moving in this direction, Activision appears poised for more sales growth. Management said on the recent earnings call that two new releases in the second half of this year, World of Warcraft Battle for Azeroth and Black Ops 4, should help give the company a "very strong final quarter" this year.

For investors looking for a well-performing gaming stock that likely has more room to grow, Activision is certainly worth keeping an eye on.