Please ensure Javascript is enabled for purposes of website accessibility
Free Article Join Over 1 Million Premium Members And Get More In-Depth Stock Guidance and Research
By Lee Samaha - Sep 13, 2018 at 6:35AM

Here's the best way to invest in the Internet of Things, and three stock ideas to consider.

It's no secret that the Internet of Things (IoT) is set to be a growth investor's dream in the coming years. However, while IoT devices for consumers grab most of the media attention -- think wearable technology, connected vehicles, and smart homes -- it might surprise you to know that the biggest growth in IoT is set to come from business-to-business (B2B) applications, and most notably in manufacturing.

Ignore the media hype: The industrial sector is the best way to play the IoT theme. Here's why and how you could profit from this insight. 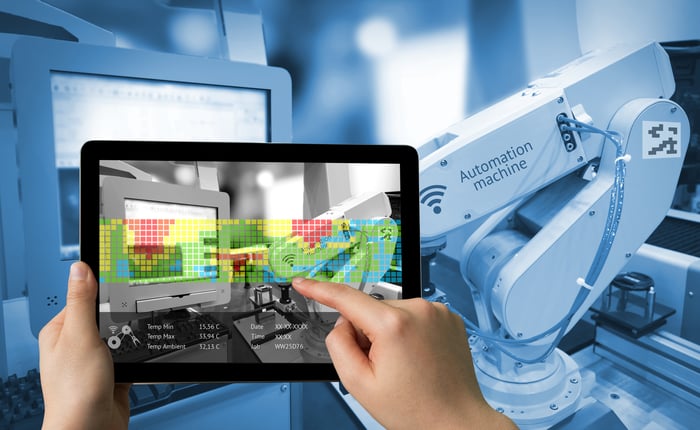 The number of connected IoT devices will increase from 27 billion in 2017 to around 125 billion in 2030, according to information services company IHS Markit.

That's an annual growth rate of 12%, and it would mean there'd be 16 connected devices for every person currently on the planet. Moreover, the data transmitted by these devices is expected to increase by an average of 50% a year in the next 15 years.

In other words, there's a huge amount of structured and unstructured data set to be generated in the coming decade, from which companies can generate actionable insights to better run their businesses. That said, the biggest winners from the IoT revolution might surprise you.

Why manufacturing companies are set to benefit

Management consultancy McKinsey & Company has estimated the annual economic value to be added in 2025 through IoT. McKinsey argues that "business-to-business applications will account for nearly 70 percent of the value that we estimate will flow from IoT in the next ten years" Moreover, McKinsey believes that between $3.9 trillion and $11.1 trillion of economic value will be added by 2025; the upper end of the range represents more than 13% of current gross domestic product worldwide.

The really interesting thing is how much of it is likely to be skewed toward the industrial sector. McKinsey thinks $5 trillion will be generated exclusively in business settings such as factories, offices, worksites, and farms. Factories alone are set to produce $1.2 trillion to $3.7 trillion of that figure.

The IoT growth opportunity is significant

If companies can generate value from IoT, it stands to reason that they'll loosen the purse strings on spending on IoT solutions. Indeed, the outlook is good, in both the medium term and the long term. For example, research company IDC predicts that worldwide IoT spending will increase at a compound annual growth rate of 14% from 2017 to 2021, reaching around $1.1 trillion in 2021.

Moreover, a poll conducted by General Electric, a leader in the industrial internet space, found that 79% of the companies surveyed don't have a mature IoT plan in place as yet.

All of this points to a multiyear expansion in IoT spending by the manufacturing industry. That's good news for Rockwell Automation, whose controls, sensors, and factory analytics make it a good way to play the IoT theme. Rockwell's aim is to grow revenue in its information solutions and connected services segment by double digits over the long term -- an outlook consistent with IDC's forecast discussed above.

Software products and solutions provider PTC's partnership with Rockwell (other PTC partners include Microsoft and GE) is intended to accelerate growth in adoption of IoT. PTC's most exciting product is its IoT platform ThingWorx.

In a nutshell, ThingWorx connects companies' physical assets with the digital world. This allows them to stream data from connected devices into ThingWorx, where they can analyze it and then build applications to better manage assets -- the very heart of the industrial IoT (IIoT).

As IoT solutions become increasingly sophisticated in how they manage automated processes, there's likely to be an accompanying increase in demand for machine vision, in order to monitor and provide visual data on automated processes.

Cognex is a fast-growing company in its own right, but throw in increased adoption of IoT among its customers, and its long-term outlook gets even better.

All told, the evidence supports the idea that the manufacturing industry is set to be the big winner from IoT, and it's a good investment theme for any growth-oriented investor. The near-term prospects of Rockwell, Cognex and PTC are obviously contingent on the overall economy, but their long-term secular growth prospects can't be doubted.

Why Shares in Cognex Are Slumping Today

1 Machine-Vision Stock Looking Into the Future