Amgen's (NASDAQ:AMGN) past is filled with excitement. The company rose to become one of the biggest biotechs in the world. It grew a product lineup with multiple blockbuster drugs. Over the last decade, Amgen's share price has more than tripled. But the excitement appears likely to diminish considerably for Amgen -- at least for the next few years.

I think this outlook was reinforced by Amgen CEO Bob Bradway's responses to questions at the Morgan Stanley Healthcare Conference on Wednesday. Here are three reasons I suspect Amgen could be a somewhat boring dividend stock over the next few years, based on Bradway's comments. 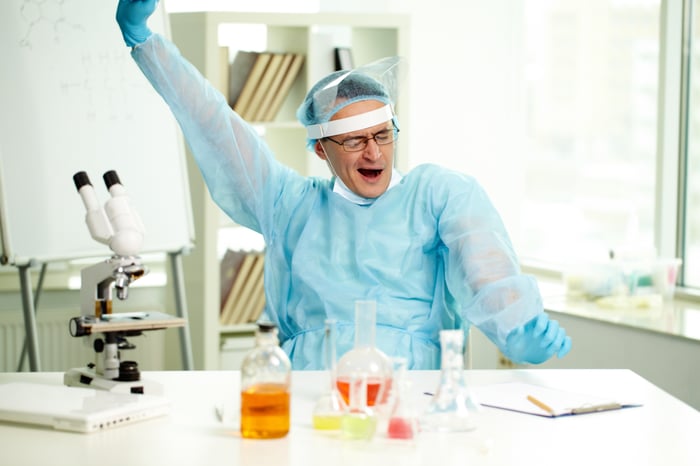 The main reason I think Amgen could be relatively boring for several years is that its growth is probably going to be limited. Wall Street analysts project the big biotech will grow earnings by a little over 5% annually over the next five years. That's not horrible, but it's not exciting, either.

Bradway stated at the Morgan Stanley conference that new migraine drug Aimovig is off to a great start. He also thinks that "there remains a huge opportunity" for osteoporosis drug Prolia. In addition, Bradway highlighted the prospects for tezepelumab, which is in a phase 3 study for treating asthma and a phase 2 study for treating atopic dermatitis. He said that in some ways, tezepelumab "feels like an Aimovig" in that it's targeting symptomatic diseases with a great unmet medical need.

However, the Amgen CEO didn't talk a lot about the headwinds for several of its top drugs. The company's newer products helped keep revenue and earnings headed in the right direction in Q2 despite sinking sales of Amgen's current No. 1 best-seller, Enbrel. However, Neulasta -- the biotech's No. 2 drug -- now faces biosimilar competition that should make growth harder to come by even with Aimovig and Prolia performing well.

2. Don't look for any big deals

You might think that Amgen would fuel growth by making a significant acquisition. Bradway even hinted at this possibility in January, stating that there is "potential for doing some attractive business development." However, based on his remarks at the Morgan Stanley event, I wouldn't count on any big deals.

Bradway said that Amgen "continues to be very active in looking at opportunities." But he quickly added that the company has "found valuations to be stretched." Bradway stated that Amgen simply hasn't been able to justify making a large acquisition that would meet its criteria for generating shareholder value.

It would take a significant acquisition of a biotech with an already approved product or an asset not too far removed from approval to move the needle for Amgen. Since current valuations appear to make such a deal unlikely, investors will probably see Amgen seek out early-stage opportunities instead.

3. The biotech's money needs to be deployed somewhere

Even with only modest revenue growth, Amgen will still generate solid cash flow. The company also has a cash stockpile totaling nearly $29.4 billion, including cash, cash equivalents, and marketable securities. If major acquisitions are off the table, Amgen will need to deploy its money somewhere. That's where those "boring" dividends come into play.

Amgen's dividend already yields 2.7%. The company has boosted its dividend by a whopping 181% over the last five years. Look for even more dividend hikes in the future.

There's also the "invisible" dividend: stock buybacks. Amgen bought back $14 billion of its stock in the first half of 2018. As of the end of Q2, the biotech had $5.4 billion remaining under its current approved stock repurchase program.

Boring isn't all that bad

Is Amgen destined to become a boring dividend stock over the next few years? Probably so. However, boring isn't all that bad. If the company boosted its dividend yield to 3% or more and achieved 5% annual appreciation in its share price, that's a total return of 8% -- enough to double an initial investment in roughly nine years.

It's also important to note that more excitement for Amgen could be on the way. Bradway sounded very enthusiastic about the biotech's oncology pipeline, especially its bispecific T cell engaging (BITE) platform. These experimental cancer drugs are only in early-stage studies now. Within a few years, though, Amgen could conceivably return to strong growth if its BITE platform succeeds in clinical studies. The boredom could be only temporary.