There are good reasons why marijuana stocks could fall, but a border ban for cannabis investors isn't one of them.

Why such negativity? The moves appear to be related to a story published by Politico late Thursday afternoon. While the Politico article was accurate (and interesting), this has to be the dumbest reason ever for a pullback in marijuana stocks. 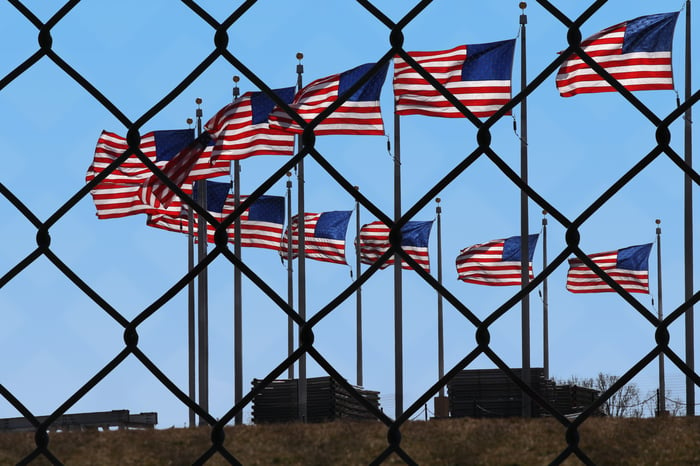 Politico reported that Todd Owen, executive assistant commissioner for the Office of Field Operations with the U.S. Customs and Border Protection agency, stated that individuals who work in the Canadian cannabis industry could receive lifetime bans from entering the U.S. What's more, even investors in marijuana stocks could be prohibited from visiting the U.S.

You're probably thinking, "This is a joke, right?" It isn't.

Todd Owen is merely adhering to section 212 of the U.S. Immigration and Nationality Act. This section establishes the criteria for who can't come into the U.S. And it clearly states that any non-U.S. citizen who

isn't allowed to enter the U.S. Marijuana is currently included on the list of controlled substances.

That language could certainly be construed to apply to individuals who have worked in the cannabis industry. But isn't categorizing marijuana stock investors as aiders, abettors, assisters, conspirators, or colluders kind of a stretch? Maybe. However, section 212 adds that even the children of a person who has received financial benefit from controlled substance trafficking shouldn't be allowed to come into the U.S. If the kids of marijuana stock investors can't enter the U.S., it stands to reason that the investors wouldn't be able to cross the border, either.

Of course, Canada has legalized marijuana. Because cannabis is legal in the country, you might think that employees of marijuana-related businesses and investors in those companies wouldn't really be viewed as traffickers in controlled substances. Think again. Section 212 states that a non-U.S. citizen who commits "a violation of (or a conspiracy or attempt to violate) any law or regulation of a State, the United States, or a foreign country relating to a controlled substance ... is inadmissible."

Good luck with that

At first blush, this news would appear to be horrible for marijuana stocks. If investors are afraid they could be forever banned from entering the U.S., they could decide to put their money in other places than marijuana stocks. Individuals who have family in the U.S. might opt to avoid working for businesses in the cannabis industry.

But how enforceable are the current prohibitions? It seems likely that it won't be a major issue.

Even Todd Owen admitted that border patrol officers aren't going to interrogate everyone entering the U.S. And although officers often ask people seeking to visit the U.S. what they do for a living, it's easy to truthfully answer the question without stating that you work in the cannabis industry (for example, "I work in the agriculture industry" rather than "I work at a marijuana greenhouse.")

Customs and border patrol staff won't start hacking into databases to see what stocks travelers own, either. Owen told Politico that some marijuana investors from Israel have already been prevented from entering the U.S. But the current rules didn't keep Canopy Growth CEO Bruce Linton from visiting with CNBC's Jim Cramer for an interview in New York this summer. Tilray CEO Brendan Kennedy has been in the U.S. as well in recent months. If they can come to the U.S., I suspect the buzz created by the Politico story is much ado about nothing.

Lots of reasons for a pullback, but not this

The fear of large numbers of cannabis industry employees and marijuana stock investors being banned for life from entering the U.S. isn't a great reason for marijuana stocks to fall, in my view. I think investors quickly realized this as well. Canopy Growth's share price, for example, jumped not long into Friday's trading. Even Tilray, a stock that I think has become so frothy that it is poised for a pullback, regained much of its earlier losses.

More than anything, the Politico story underscores that the dynamics are quickly changing. Current U.S. immigration policy doesn't reflect the realities of marijuana in today's world. That's also true of U.S. federal cannabis policies in general.

There are plenty of reasons why marijuana stocks could drop in price. Sooner or later, there will be a supply glut in Canada that could cause worries. International medical cannabis markets might not grow as quickly as many expect they will. Valuations are so high that any hiccup could cause a plunge. But a bizarre border ban based on now-antiquated regulations isn't a good reason for a pullback in marijuana stocks.