Investors who might not be familiar with Dave & Buster's (NASDAQ:PLAY) likely had to do a double take after earnings were released on Sept. 14. While the chain showed negative traffic patterns in its stores and equally discouraging comparable-store sales, shares jumped as much as 9% following the quarterly report.

The catalyst was a triumvirate of good news: better-than-forecast results, a guidance bump, and a new capital return plan for shareholders. That doesn't mean, however, that it will be clear sailing for the restaurant or its shareholders. 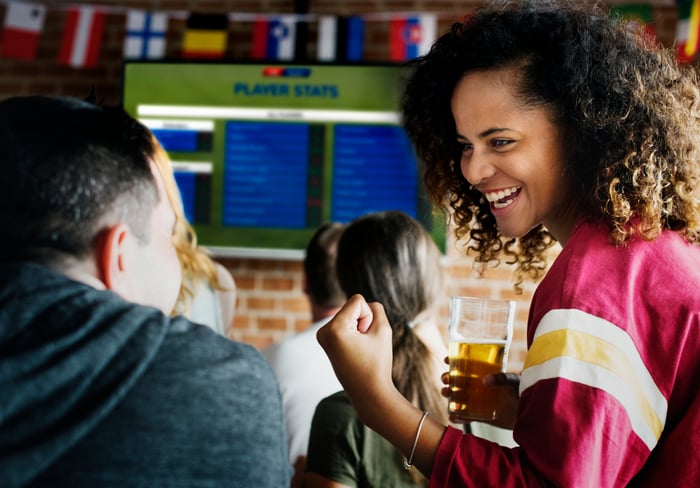 Before we dive into the specifics, let's take a look at how the company performed on the headline numbers:

It's important to note that, thanks to differences in the calendar between this year and last, revenue growth would have been 11.4% were this year's calendar directly comparable to last year's.

That being said, it's always good to see earnings growing faster than revenue. On the whole, the company accomplished this by pulling two levers. The first was a 434 basis point improvement to amusement revenue (i.e. the games people play before, during, and after eating their food). This improvement was in large part due to the release of Jurassic Park VR Expedition -- a proprietary virtual reality game, and Halo. Amusement and other revenue more than offset a 43 basis point loss in gross margin from the food and beverage segment.

The second lever was the fact that operating expenses grew more slowly -- at a 12% total rate -- than revenue. This was due almost entirely to general and administrative costs shrinking 12% during the quarter, while expenses for store operations, payroll, and benefits grew roughly in line with revenue.

But the big number that investors commonly focus on is comparable-store sales -- or comps. This measures how well individual stores that were open for all of last year's second quarter fared during this year's three-month period. On that front, comps were down 2.4%. A 2.6% decrease in walk-in reservations was the major factor. Viewed from a granular level, food and beverage comps were down 4.1%, while amusement comps were down 1.2%.

While that might seem bad, it's important to put it in context of what investors were expecting. Last quarter, management told us to expect comps to fall in the low- to mid-single digits for the year. A drop of 2.4% is decidedly on the better end of that spectrum, and shows the company moving in the right direction when we view the historical trends. 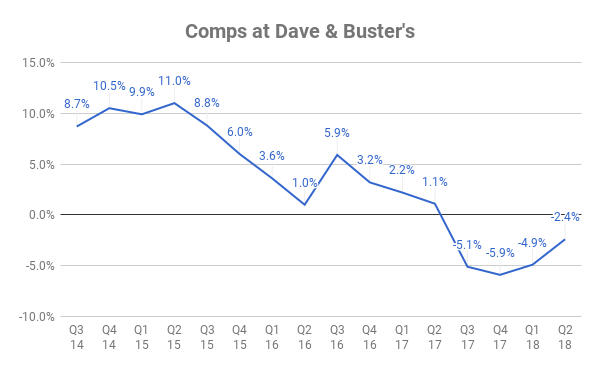 Just as big, however, was the company's announcement of a two-pronged capital return program. This includes:

The company has already repurchased 941,000 shares under the old program at an average price of $47.82 per share -- a prudent use of capital given the current price of over $60 per share. But initiating a dividend is a whole different ballgame.

Analysts were quick to question this decision. Dave & Buster's is still small and growing fast -- it only has 117 total stores and plans to expand its footprint by another nine to 10 stores by the end of the fiscal year.

New store development remains the number one spot priority ... We have leaned into our share repurchase program in recent history. And we thought another idea to be able to return value to our shareholders would be to implement a dividend of $0.15 per share.

In terms of absolute dollars, it's not nearly as impactful as some of the historical rate that we have done on our repurchase activity ... We feel good about our financial position. We have relatively low leverage of just over one-time, and we think that dividend would be a great opportunity ... to deliver value to our shareholders.

Given that after any new share repurchases are completed there will be between 38 million and 39 million shares outstanding, the payout should cost the company around $23 million. Over the past 12 months, Dave & Buster's has brought in $55 million in free cash flow. So the new dividend shouldn't create too much strain moving forward -- so long as comps continue to improve.

This brings us to the third leg of the stock's pop: raised guidance. To summarize:

Right now, shares trade for 22 times trailing earnings and 44 times trailing free cash flow. The company has significantly differentiated itself via its amusement offerings, but it needs to carefully balance its expansion aspirations -- especially in light of competition in its niche -- by fulfilling its dividend payments. If comps continue to improve, the company should be able to pull it off, and that's where investors need to focus.