Dividend yields can be high for a lot of reasons, and sometimes those reasons make investing in high-yield stocks risky. For instance, dividend yields can swell if share prices fall because a company's on shaky financial ground.

Although there's no way to completely protect yourself from the risk that a company falls on tough times, focusing on companies with catalysts that support dividend payments may improve the odds of picking winners instead of losers. With that in mind, three Motley Fool contributors scoured the universe of dividend-paying stocks for companies that pay a high yield they think is sustainable. They settled on Hess Midstream Partners (NYSE:HESM), AT&T (NYSE:T), and Alliance Resource Partners (NASDAQ:ARLP). Are these top stocks to consider buying now? 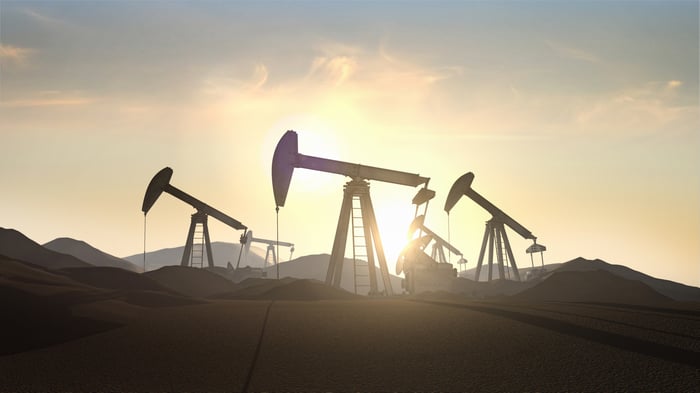 A big dividend payer with room to grow

Last quarter, Hess Corp. added a fifth rig to its Bakken acreage, and it plans to add a sixth rig before the end of 2018. Exiting Q2, Hess is guiding between 115 million and 120 million barrels of oil equivalent per day (BOED) this year. By 2021, it's targeting production of about 175 million BOED.

Hess' Bakken production plans are already providing a tailwind to Hess Midstream Partners' financials. In Q2, its throughput volume grew "20% for gas gathering, 26% for crude oil gathering, 21% for gas processing, and 42% for crude oil terminaling." Altogether, upside in throughput volume translated into $165 million in revenue, up from $138.3 million last year, and net income of $95 million in Q2.

Hess Midstream Partners is guiding for $350 million or more in net income, and Hess Corp.'s Bakken capacity investments suggest the company will be able to deliver on its long-term 15% dividend growth target. If I'm right, then buying this company in income portfolios could be smart, especially since its shares are already yielding 6.2%.

Chris Neiger (AT&T): Many investors cooled toward AT&T's shares over the past year, as the company was fighting the Department of Justice to get approval of the Time Warner acquisition. A federal judge rejected the government's concerns about the deal back in June, and the acquisition has since moved forward. Despite the current turbulence the company is facing, I think there's a lot of opportunity for the wireless carrier. Here's why.

Bringing Time Warner into AT&T's existing wireless business means the company will be able to pair media content (HBO, Warner Bros., CNN, etc.) with its wireless and home internet services. The telecom essentially has the opportunity to control both the pipelines that deliver the content and the content itself. That's a powerful position to be in, and it could help the company bundle content and services together.

But the recent Time Warner acquisition isn't AT&T's only opportunity. The top U.S. wireless carriers are all gearing up for the next major smartphone battleground -- 5G wireless. Verizon and T-Mobile have begun their own 5G tests, but AT&T already has plans to bring 5G capabilities to 12 cities by the end of this year. 5G will be a big step forward for both wireless speeds and latency (the time it takes for a device to communicate with a cellphone tower) and could help the wireless industry offer more services -- with additional revenue streams from Internet of Things devices -- as 5G expands.

With AT&T's Time Warner deal and its growth potential in 5G, I think this dividend stock is looking better all the time. The company's shares trade at just 9 times AT&T's forward earnings, and with a current yield of nearly 6%, dividend investors would be smart to give this high-yield stock a second look.

You can dig this ultra-high-yield dividend stock

Although coal prices have been under pressure in recent years as oversupply concerns and stagnant demand in the U.S. have weighed on the industry, Alliance Resource Partners continues to stick to its game plan and come out a winner. In particular, this company has three main advantages over its peers.

Second, this is a company that's really begun to lean on coal exports. After exports comprised just 4.5% of total sales in 2016, they're on track to comprise approximately 27% of sales this year, based on the midpoint of Alliance Resource Partners' full-year sales estimate. Look for the company to continue looking to Asia as a source of steady demand for its coal.

Third, the company has a very reasonable $470 million in net debt, which works out to a debt-to-equity ratio of under 42%. Whereas many of its peers are financial constrained by debt, Alliance Resource Partners has the flexibility to make moves to better its business over the long run.

Add all of this up, and you get a company valued at just over 8 times next year's profit forecast, and sporting a delectable 10.5% dividend yield. Talk about digging up profits.