Please ensure Javascript is enabled for purposes of website accessibility
Log In Help Join The Motley Fool
Free Article Join Over 1 Million Premium Members And Get More In-Depth Stock Guidance and Research
By Keith Speights - Sep 20, 2018 at 6:31AM

What goes up can come down. And that's what is likely to soon happen with this sizzling-hot marijuana stock.

If you bought Tilray (TLRY) the day of its initial public offering (IPO) in July, you're now sitting on a whopping gain of 780%. If you bought the marijuana stock just a month ago, you're up more than 540%. Even if you're a late-comer to the Tilray train and scooped up some shares when the market opened on Monday of this week, you still have made a 65% return in only three days.

Usually, I would say hold on to a stock for the long run. Normally, I would point out that my biggest investing mistake is the same as that of many others -- selling too soon. But if you're up big on Tilray, my suggestion now is to take the money and run. And run fast. Here are three reasons why. 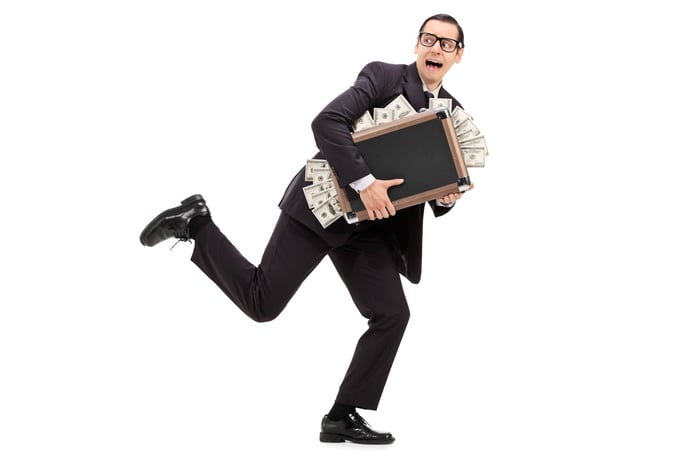 1. The short squeeze will probably be short

The problem with short squeezes is that they're usually, well, short. Once enough short-sellers cover their positions, the upward pressure on share prices fades. When the momentum changes direction, a stock can quickly nosedive.

Is it possible that Tilray isn't in a short-squeeze scenario? Maybe, but what's happened over the last few weeks certainly matches up with what typically occurs in a short squeeze. There have been several positive news stories boosting Tilray stock, most recently with its CEO getting to share his optimism with a large investing audience on CNBC. There has also been increased interest from short-sellers in Tilray since the end of Q2. Put those two ingredients together and it often cooks up a short squeeze.

2. The lockup period will expire soon

There is admittedly some guesswork involved with calling what's going on with Tilray a short squeeze. However, no guessing is required with another factor: Tilray's IPO lockup period is 180 days and expires on Jan. 15, 2019. If you're not familiar with lockup periods, they are the period of time following an IPO when insiders can't sell their shares.

When the lockup period is over, it's not unusual to see insiders rush to sell at least some of their stock. That's especially the case when the stock has generated a huge return. I would be shocked if many Tilray insiders don't take profits as soon as they can.

3. The valuation is unsustainable

Last and definitely not least, Tilray's current valuation is unsustainable. It just isn't.

Yes, Tilray CEO Brendan Kennedy went on CNBC and talked about a $150 billion global cannabis market. Aurora Cannabis executives have mentioned a global market size of $180 billion. Kennedy could be right. Aurora could be right. But there are two major problems that investors need to understand.

First, these projections are for the market size way into the future. The further in the future an estimate is, the less confidence you should have in the number. Arcview Market Research and BDS Analytics project that the global marijuana market will total around $32 billion by 2022. That's a much more reasonable number to use in calculating stock valuations than the ginormous figures that marijuana company executives are using.

Second, all of the estimated market sizes include the U.S. -- the 800-pound gorilla in the cannabis industry. Three-quarters of the projected global cannabis market in 2022 will be in the U.S. But until marijuana is no longer illegal at the federal level, Tilray can't enter the U.S. market. That might happen within a few years, but it might not. And even if the U.S. suddenly changes its laws next week, Tilray's valuation is still astronomical based on its growth prospects over the next five years.

Separating the business from the stock

Assuming there is a short squeeze going on right now, it won't last much longer. Even if there isn't a short squeeze, a sell-off is right around the corner as the IPO lockup expiration date draws nearer. Tilray's share price has soared well beyond what the realistic prospects for the business -- as good as they are -- justify.

To put it in 1970s rock-song lingo, I don't think investors should, as the Eagles sang, have "a peaceful, easy feeling" about Tilray. Instead, my view is to follow the Steve Miller Band's admonition to "take the money and run."