An analyst at Deutsche Bank downgraded Seaspan Corporation from buy to hold while trimming the bank's price target from $13 a share down to $9 apiece. Two factors drove the decision to downgrade. First, the analyst pointed out that the stock had enjoyed quite the rebound in recent months, rallying 65% off the bottom in mid-March before today's sell-off. In addition to that, the analyst noted that there's increased risk from the trade war between the U.S. and China to the company's outlook in both the near and mid-terms. 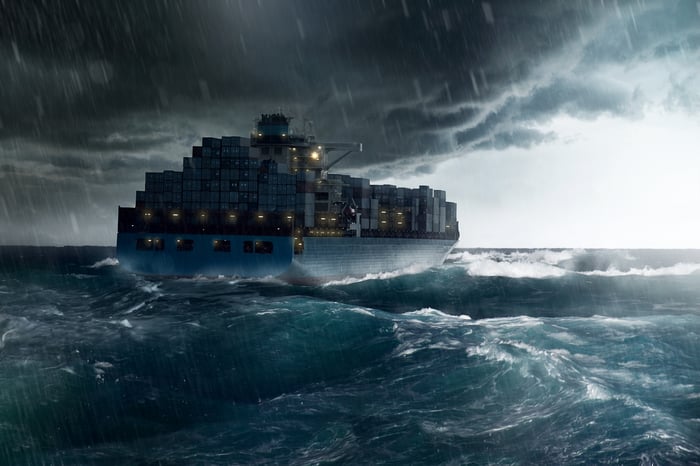 In other news, Seaspan Corporation has continued to work toward improving its balance sheet so that it can weather the shipping sector's storms. The company took its latest step yesterday by closing a $150 million public offering of preferred shares. The shipper intends to use that cash for general corporate purposes, which could include funding acquisitions, repaying debt, or redeeming some of its existing preferred stock.

Meanwhile, the company started the week off by prepaying two credit facilities secured by six vessels. As a result, those ships will no longer serve as collateral for those facilities. That increases the company's flexibility and puts it another step closer to its aim of having a strong, investment grade–rated balance sheet.

It's still unclear how much the brewing trade war will impact the shipping industry. While Seaspan has largely insulated itself from the ebbs and flows of shipping rates by securing long-term contracts for the bulk of its vessels, it does have some smaller ships under short-term charters as well as a few upcoming lease expirations. While charter rates had been on the upswing, which would boost its earnings from these ships, another downturn in shipping due to the trade war could cause them to plunge again, which would hurt Seaspan's profitability just as it was finally starting to improve.