It seems as though the case to invest in oil gets stronger and stronger as oil prices continue to rise. Not only is the price of crude oil flirting with $80 a barrel, but there are also lots of unique opportunities arising from price discrepancies and shifting trends in the industry. At the same time, many of the stocks in the oil and gas industry are trading at dirt-cheap prices.

So we asked three of our Motley Fool contributors to sift through stocks in the oil industry to come up with three that investors should buy. Here's why they picked MPLX LP (NYSE:MPLX), Cimarex Energy (NYSE:XEC), and ExxonMobil (NYSE:XOM). 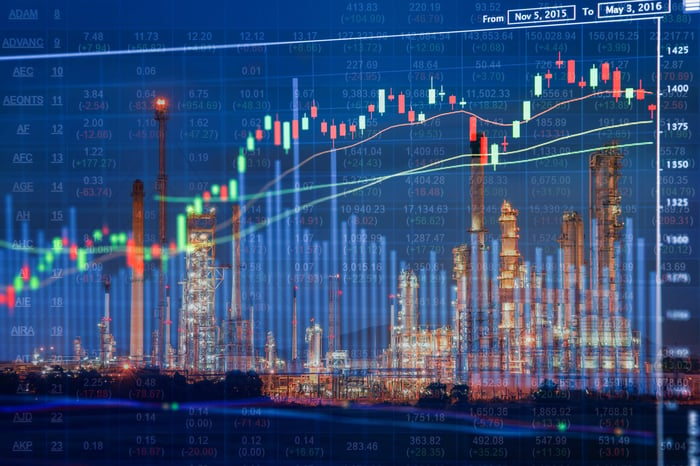 That's a fat yield you got there

Tyler Crowe (MPLX LP): When investing in midstream master limited partnerships, there is one question that I look to answer above anything else: Is the management team good stewards of investor capital? While there is no precise way to answer this question, qualities like the treatment of debt levels, corporate structure, and balancing cash outlays between sizable distributions and growth are important. MPLX, a pipeline and processing specialist, has so far in its relatively short history shown to have these qualities, and it is why I have bought shares.

What is perhaps most impressive to me is MPLX's ability to grow its payout to investors as quick as it has in recent years while leaving itself a lot of margin for error. This past quarter, management increased its distribution by 11% compared with the same quarter a year ago and marked the 22nd consecutive quarter with a distribution increase. Even though its payout is growing by double digits, its distribution coverage (cash coming in to distribute over actual amount distributed) was 1.37 times. Also, MPLX's debt-to-EBITDA ratio is 3.16 times, which is modest for a capital-intense industry like pipelines and processing facilities.

I'm not 100% certain that it will be able to maintain double-digit distribution growth for much longer. Parent company Marathon Petroleum has already sold all of the midstream assets it has to MPLX and the partnership will now have to subsist on organic growth projects. It does have a robust queue of projects in the Marcellus and Utica shale gas basins, though, which should support growth for years to come. Besides, with a stock that yields 6.8% today, it doesn't need to grow at a breakneck pace to be a good value investment.

Betting on a catalyst

Matt DiLallo (Cimarex Energy): The price of oil has rebounded another 12% this year, which has provided a boost to most oil stocks, with the average one in the iShares U.S. Oil & Gas Exploration & Production ETF rising about 13%.

However, not all oil stocks have participated in that rally. A notable exception is Cimarex Energy, which has been one of the worst-performing oil stocks this year after tumbling nearly 25%. That's mainly because investors have overreacted to some negative news. It all started in February when the company boosted capital spending 29%, which investors thought was a bit too aggressive. Meanwhile, pipeline issues in the Permian Basin have been weighing on regional oil prices, which contributed to the company reporting lackluster second-quarter results. 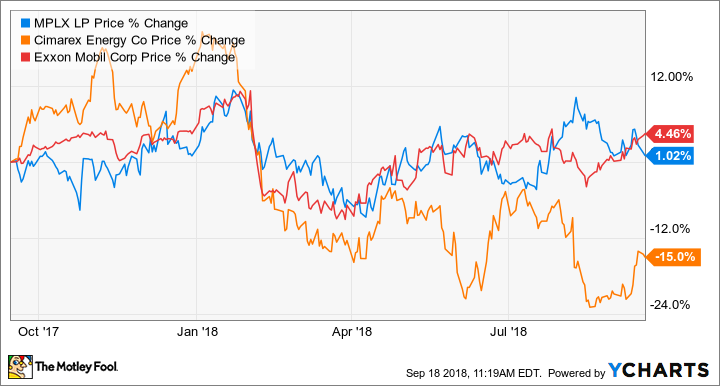 Because the market has focused its attention on these negatives, investors are likely overlooking the positives. First of all, Cimarex has a top-notch balance sheet that now has nearly $1 billion of cash after the company sold a noncore asset last month. Further, it's on pace to grow production at a double-digit compound annual rate over the next three years while generating $500 million to $600 million in free cash flow over that time frame, and that's assuming oil averages $55 a barrel, which is well below the current price.

With all that cash in its coffers and coming in the doors, Cimarex Energy could start repurchasing its beaten-down stock. That could be the jump start needed to get shares moving in the right direction, especially since buybacks have fueled needle-moving gains for many of its peers in the past year. That potential catalyst makes Cimarex Energy one of the most compelling oil stocks to buy right now, in my opinion.

Reuben Gregg Brewer (ExxonMobil Corporation): Yield, valuation, and safety are three reasons to look at Exxon right now. The yield, at around 4%, is higher than it has been since the 1990s. The integrated energy major's price-to-tangible-book-value, meanwhile, is lower than it has been since the 1980s. And, despite an increase in leverage during the last oil downturn, long-term debt only makes up around 10% of Exxon's capital structure (a conservative level for any company). 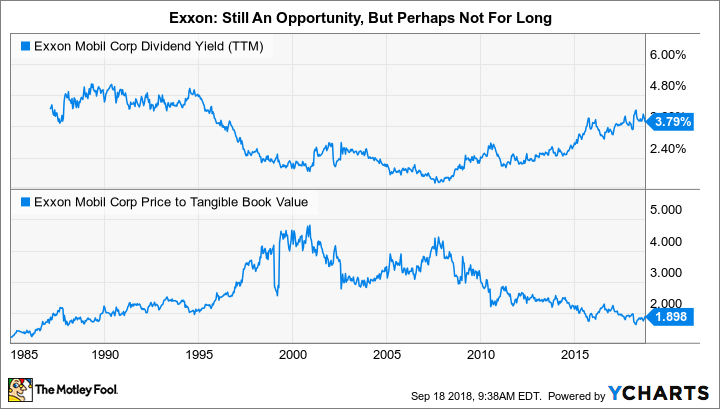 Yes, Exxon is struggling right now, but it has plans to right the ship. The first two reasons above show you are getting paid well for the risk here. That risk, meanwhile, is pretty minimal since Exxon has the balance sheet strength to keep investing even if oil heads lower again. Which brings up a fourth reason to like Exxon: opportunity.

Opportunity is an odd word to use in conjunction with an oil company, since dirty carbon fuels look likely to go the way of the dodo. Only there's a long time before that happens. In fact, through 2040 Exxon expects oil demand to increase modestly in support of global growth, with both transportation and chemicals as key supports. Meanwhile, natural gas, a transition fuel and a big piece of Exxon's production profile, is projected to grow share at the expense of coal.

Further, because oil and natural gas wells are depleting assets, Exxon believes that materially more drilling will be needed or demand will outstrip supply in five to 10 years. Which, by the way, is right about when its current round of investments is expected to start benefiting the company's top and bottom lines. Investors are thinking short term today, but Exxon is a long-term play -- and now is the time to jump aboard.