Chipotle (NYSE:CMG) CEO Brian Niccol has addressed many of the company's most pressing issues during his limited time on the job. He has begun the process of the chain offering a more dynamic menu, has continued to address food safety, and has taken steps to modernize the company's app.

In most areas, he has been very successful, and consumers rewarded the chain with a 3.3% increase in comparable-store sales in the second quarter along with an 8.3% gain in total revenue. Those are strong numbers, but the company remains challenged by its own success. 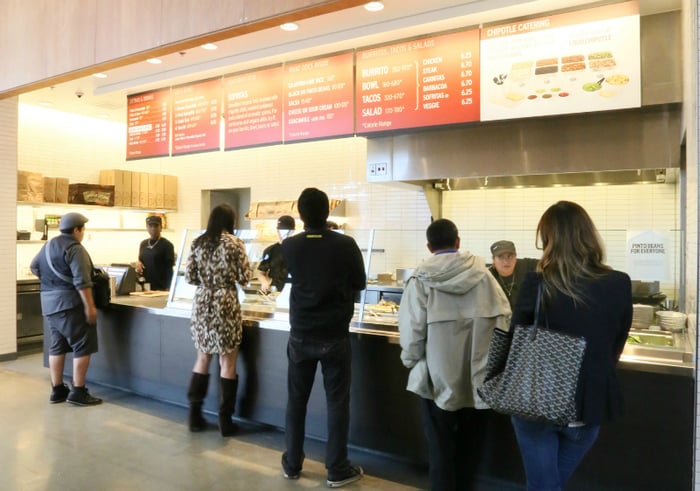 Long lines can be a problem at Chipotle. Image source: Chipotle.

Although Niccol noted that the company has new training in place, along with new scheduling tools designed to make sure peak times are well staffed, eating in a Chipotle during busier hours can be trying. Since every order is handmade, and stores generally have a single cash register, a person placing a big order -- or who is just indecisive -- can leave your food sitting out growing cold as you wait for a chance to pay.

In many cases, what makes Chipotle great -- the ability to completely customize your order -- also causes production problems. It's not a fatal flaw for the company, and it's one Niccol has addressed, but for now, it's a problem that's being exacerbated by digital orders and delivery, which are also part of the solution.

Right now, the company has 2,450 stores, and only about 300 of them have a digitally-enabled second production line designed to more easily handle digital and delivery orders (though that number will reach 900 by the end of the year). Even at stores that have a digitally-enabled second line, many do not have a dedicated area for picking up digital orders, which creates a logjam at checkout.

This is very similar to the problems Starbucks experienced as its digital order and pay system grew in popularity. Since orders placed by people in line and digital orders all went to the same location, that led to crowds of customers fighting for real estate. The company corrected that by adding digital pickup areas in some stores and increasing production personnel during peak times to keep people moving.

Niccol knows that his company leaving the "fast" out of fast-casual will cause customers to go elsewhere. Fixing that will require taking customers out of line by having them order via app, then have that order made on a second production line, and finding ways to arrange for pickup of those orders that don't slow down the people in line.

Steps are being taken on all of the above-mentioned fixes. Currently, digital sales only account for 10.3% of the chain's sales, but that number grew by 33% year over year. Chipotle has also seen active monthly users for its app grow by 65% to 4 million in Q2. The biggest step, though, is adding production capacity.

"As I've mentioned, Chipotle second make-line enables the business to handle the incremental growth without any impact on throughput or the in-restaurant experience," said Niccol, continuing:

I'm happy to see progress on digitizing our second make-lines, which are now in roughly 500 restaurants. We are targeting approximately 1,000 restaurants to be enabled with the digital second make-line by year-end and we are accelerating our rollout to reach completion by the end of 2019.

There's work to be done

While it can be frustrating as a Chipotle customer to deal with these issues, it's encouraging for investors to hear that Niccol understands the problem. Adding a second production line isn't easy or cheap, but it's necessary, and doing so will greatly improve the dining experience for the chain's customers.