Please ensure Javascript is enabled for purposes of website accessibility
Log In Help Join The Motley Fool
Free Article Join Over 1 Million Premium Members And Get More In-Depth Stock Guidance and Research
By John Ballard - Sep 23, 2018 at 9:32AM

The first season of Activision Blizzard's (ATVI -0.06%) Overwatch League was a success by every measure. The game maker attracted major sponsors and a large audience that spent 160 million hours watching Overwatch League matches. To top it all off, Activision recently announced the sale of eight new teams for next season.

This brings the league to 20 teams representing major cities around the world, including New York, Washington, Paris, London, Los Angeles, Shanghai, and Seoul. The long-term goal is 28 teams, which at this pace might be accomplished within the next year. 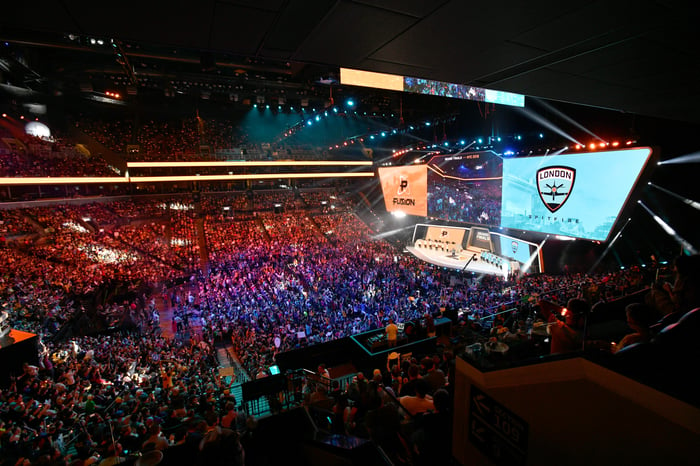 A full house at Barclays Center in Brooklyn for the Overwatch League Grand Finals in July 2018. Image source: Activision Blizzard.

The city-based approach is unique for esports, and clearly a success. It's the blueprint for how CEO Bobby Kotick plans to turn Overwatch League into a global spectator sport on a scale similar to traditional sports.

Who are buying these teams?

Last year, Activision sold the 12 teams for the inaugural season for about $20 million each. This new round of team sales fetched from $30 million to $60 million each, according to ESPN. That speaks volumes not only about the success of the league's first season, but also about the league's perceived long-term value to team owners.

The owners include celebrities, like Jennifer Lopez and Shaquille O'Neal, and owners of traditional sports teams, like Robert Kraft (the New England Patriots) and the Kroenke family (the Los Angeles Rams and other teams).

These investments from high-profile names have lifted the prestige of Overwatch League among deep-pocketed investors, but what's really interesting is that Overwatch is not even the most-watched esport.

So why are high-profile investors flocking to Overwatch League?

Above all, it's the support, vision, and financial backing of a major game company like Activision Blizzard. Beyond that, there are a few other factors.

Overwatch League is unique in that it's not a tournament; it has the same structure as traditional sports with a six-month regular season, playoffs, all-star game, and off-season. There are player contracts, player trades, and free agent signings. And sponsorships for both the league and individual teams go a long way in helping owners build a business around their teams.

On top of that, Activision's focus on a city-based structure means that Overwatch League teams will eventually move from the Blizzard Arena in Los Angeles (where all regular season games have been played so far) to their respective cities, according to a report from ESPN. This will open up new ways for owners to monetize their teams, including localized marketing and merchandise.

It's also a major advantage for team owners that Activision owns valuable distribution assets, such as Major League Gaming, which broadcasts matches with the same presentation style found for traditional sports on TV. Additionally, Activision has struck exclusive multiyear deals for media rights with Amazon.com's Twitch and Twitter to stream live matches and other content.

Essentially, Activision has structured Overwatch League to be profitable not only for the company, but also for team owners. It's a partnership focused not on the short term but on generating profits over the long term.

The esports market is growing fast, with market researcher Newzoo estimating it will reach $1.4 billion by 2020. That's up from $906 million estimated for this year. About three-quarters of that is advertising, which provides one final reason that team owners are so eager to spend big to get in on the ground floor of Overwatch League.

The average age of an Overwatch player is 22, and there are 40 million players worldwide. In his 2017 shareholder letter, Kotick pointed out that the National Football League also has about 40 million regular season spectators, but an average audience age of 50. It's no secret that for a long time, the average age of spectators of traditional sports has been increasing.

Looking out over the next century, could an esport like Overwatch League overtake the following of professional basketball, football, or baseball? It sounds crazy, but considering the aging audience for traditional sports relative to a young Overwatch League audience and the sold-out arenas for major esport events, it certainly looks possible.

If these trends continue, Activision Blizzard is perfectly positioned to capitalize, because right now, Overwatch League is the only esport organization set up to make a lot of money. It has all the ingredients for a profitable, professional esport: financial backing and support from a major game company, direct-to-market distribution (Major League Gaming, Twitch, etc.), a growing list of team owners, major brand sponsors, and a young demographic spread out around the world.