The audio specialist looks set to lose big this time.

Cirrus Logic (CRUS 0.10%) is in a soup thanks to its overdependence on Apple (AAPL 0.17%), and Cupertino's latest products are going to make things worse for the chipmaker. Known for supplying audio chips to Apple's iPhones and headphone dongles, Cirrus got more than three-fourths of its revenue from the iPhone maker in its latest quarter. As such, Apple's decision to no longer include free headphone dongles with each iPhone it sells could deal a big blow to Cirrus.

Apple's removal of the headphone jack from the iPhone 7 back in 2016 had caused such panic among users that the company started including a free headphone jack dongle with each device that it sold. The practice continued with the 2017 iPhone models before Cupertino decided that it won't be handing out the dongle for free from this year onward, including with older iPhones. 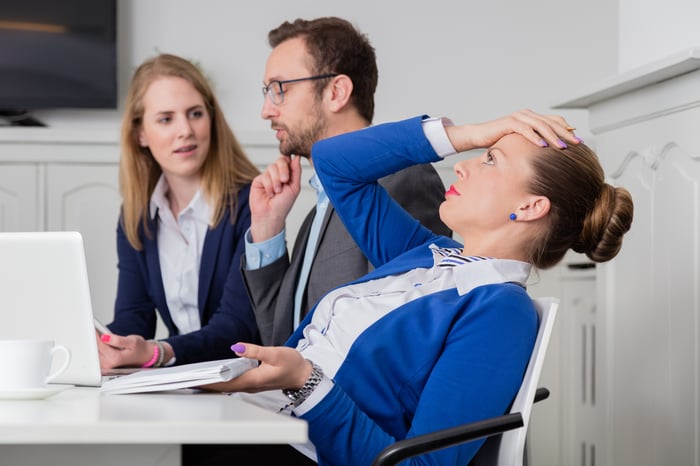 Instead, Apple customers will have to purchase the dongle separately for $9. Cirrus shares fell instantly as soon as Apple announced this move, which is not surprising, as the chipmaker supplies $1 worth of content to each dongle according to a Barclays estimate. Now, Apple reportedly sold more than 216 million iPhones last year (including the iPhone 8/8 Plus and the iPhone X) and produced 117 million units of the iPhone 7/7 Plus in 2016 when that device was launched.

So Cirrus could have made around $300 million worth of revenue from the dongles that were bundled with those devices in the span of just more than a year. For context, Cirrus has generated $1.47 billion in revenue over the past year, so those dongles were contributing a healthy chunk to the company's top line.

What's more, research firm BlueFin estimates that Apple will manufacture around 184 million units of the current iPhone generation. This means that Cirrus is going to lose out on a sizable amount of revenue over the next year thanks to Cupertino's move. Of course, consumers can separately purchase the headphone dongle by paying $9, but it is difficult to know if they will take this option or go some other route (such as buying wireless headphones).

When Apple was bundling the dongle with iPhones, Cirrus was getting guaranteed revenue. However, Apple is now more likely to decide how many dongles to make based on customer demand, rather than automatically shipping one with each iPhone as it did before. As such, Cirrus looks destined for a drop in sales.

This win won't be enough

Apple, however, also gave Cirrus a lifeline. Cupertino's latest smartwatch, the Apple Watch Series 4, now supports haptic feedback, and Barclays believes Cirrus is supplying the amp to power this feature. The chipmaker reportedly has $0.50 worth of chip content inside each Apple Watch, but the problem is that this device won't move the needle in a big way for Cirrus.

Market analyst firm Canalys estimates that Apple sold 18 million smartwatches last year, a 54% jump over 2016 levels. The Apple Watch Series 3, which was the latest model on sale that year, accounted for nearly half of Cupertino's smartwatch sales. Assuming that Apple's smartwatch growth is identical to last year's and that the latest Watch Series 4 accounts for half of the sales once again, the company could end up moving around 13 million units of the latest model.

But this would translate into just over $6 million in sales for Cirrus, which is nothing compared to what it might lose from the headphone dongle business.

As it stands, iPhone unit sales have hit a ceiling, which is why Apple is now focusing on boosting the average selling price by launching costlier devices. This is bad news for Cirrus, as it has been a regular supplier of audio codecs and amplifiers to iPhone generations over the years, and flat iPhone unit sales will weigh on its top line.

Also, Cirrus stands to lose big from Apple's move away from including free dongles with every iPhone, while Cirrus's with with the Apple Watch Series 4 is not significant enough to move the needle for the company, which is why a turnaround looks unlikely for this troubled chipmaker.