Here at three key points made by the new CEO of the office design house in a recent earnings conference call.

Herman Miller, Inc.'s ( MLHR 2.27% ) fiscal fourth-quarter 2018 and first-quarter 2019 reports, issued in July and September, have restored the trajectory of company stock: Down as much as 27% this spring, shares have rebounded to a mere 2% loss year to date. Improved order flow and strong organic growth have allayed investor fears over a revenue deceleration. In addition, the iconic office furniture designer and manufacturer has been able to quantify the expected impact of aluminum and steel import tariffs, while presenting credible steps to mitigate their effect. Finally, shareholders appear to approve of the appointment of Andi Owen to the role of CEO. Owen succeeded longtime CEO Brian Walker in August following his retirement.

Owen's previous experience was concentrated at retailer Gap Inc., where she held positions of increasing responsibility over a span of 25 years, most recently leading 11,000 employees as global president of Gap's Banana Republic division. Below, let's review three of Owen's comments during Herman Miller's Sept. 20 earnings conference call, to get a sense of her approach, assessment of current business conditions, and opportunities ahead.

Our innovation roadmap extends not only to physical products but to the Live OS digital platform as well. This technology provides real-time data insights to help individuals and organizations improve workspace performance and achieve wellness goals. -- CEO Owen

The Live OS platform connects sensor-enabled furnishings to a cloud-based dashboard and app which provide personalized wellness data, including activity levels and posture statistics. Owens should be able to expand the reach of this timely technology. In the company's August press release announcing her appointment, the company cited Owen's leading of a "complete omnichannel organizational transformation" supported by a "digital first" approach at Banana Republic. Workplace wellness is becoming a priority among employers as insurance companies increasingly provide cost relief for on-site wellness programs and measurable fitness and health-related employee activities. Shareholders can expect to see a higher emphasis on digitally enabled furniture, and accompanying analytics technology, in the coming quarters.

In the past, we have projected a North American annual revenue opportunity at $75 million to $100 million in the next 5 years, and the more we learn, we believe there's potential it could be even bigger. -- CEO Owen

This comment refers primarily to the company's recent investment in privately held Danish ancillary furnishings provider Nine United Denmark A/S, better known as HAY. In June, Herman Miller purchased a 33% equity stake in the provider of armchairs, textiles, rugs, and accessories for $66 million, with an option to acquire more equity in the future. The company expended an additional $5 million for the rights to market HAY furnishings in North America.

Herman Miller is placing a curated collection of HAY products in its Design Within Reach furniture studios, to be available by the end of October. HAY will also launch its own commerce-enabled North American website in November. And the first two of six initial HAY studios are currently under construction in Costa Mesa, California, and Portland, Oregon. In addition to its equity purchase, Herman Miller will spend $5 million to $7 million in the next year between the e-commerce site and studio buildouts.

The revenue opportunity from Hay is significant. The North American segment's top line reached $1.28 billion last year; thus, layered on top of organic growth, Herman Miller may be able to add another 6% to 8% in annual North American sales through the acquisition. And as Owen alludes to above, further investment in North American HAY infrastructure could boost the capture of market share. 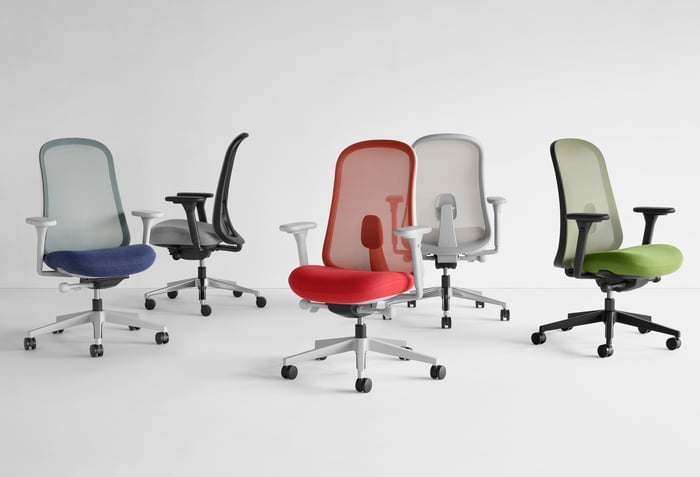 A strategy to deal with tariffs on furniture components

Given the recently announced tariff levels and effective dates, we expect a fairly minimal impact on the second quarter. As we look beyond Q2, we have developed mitigation strategies that we believe will offset the impact of these tariffs in the medium to long term. -- CEO Owen

While the fiscal second quarter of 2019 won't display much damage from recently implemented tariffs on imported steel and aluminum, the impact will become more significant in the following reporting periods. CFO Jeff Stutz shared some very preliminary numbers on the call as the company is still assessing the hit to cost of goods sold. Stutz stated that the bump to raw costs would likely land between $5 million and $6 million each quarter. At the midpoint, this equals $22 million of annualized cost increases, or about 1.5% of last year's total cost of sales of $1.5 billion.

Both Owen and Stutz discussed the mitigation measures Herman Miller has in place. These include further revising a planned January 2019 price increase while adjusting selective discount thresholds, exploring duty drawbacks (i.e., refunds of duties paid on imported materials when the finished product is subsequently exported), and analyzing cost reduction opportunities in the company's supply chain. When Herman Miller next reports in late December, tariff impacts are sure to figure into the conversation surrounding results. But at the outset of Owen's tenure, any truly adverse effects will likely be absorbed by pragmatic advanced planning.