Seagate Technology (NASDAQ:STX) and Western Digital (NASDAQ:WDC) are the leading makers of hard-disk drives (HDDs). Both companies also offer flash-based storage products, such as solid-state drives (SSDs). Seagate and Western Digital have delivered solid results lately, driven by strong demand for high-capacity HDDs, which are being used by data centers.

Market participants expect strong demand for storage capacity over the next decade as the world accumulates more and more data from mobile devices, the cloud, and the Internet of Things. Additionally, SSD technology -- in which Western Digital is No. 2 in market share, thanks to its ownership of SanDisk -- is expected to become more widely adopted, especially in the consumer market.

We'll compare both stocks on a range of key metrics to determine which is the better buy for investors today. 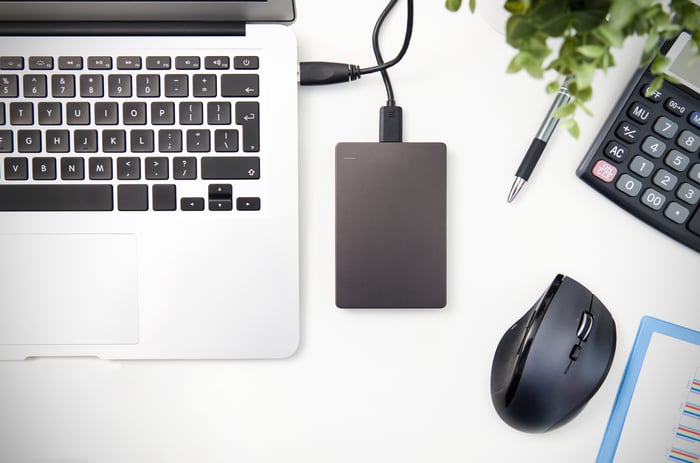 Data source: Seagate and Western Digital. All figures refer to the most recent fiscal year. Chart by author.

That said, Western Digital generates nearly twice as much revenue and free cash flow as Seagate, so it can afford to carry more debt.

We can get a better handle on which company is stronger financially by looking at the interest coverage ratio (earnings before interest and taxes divided by interest expense). This measures how many times over a company can pay the interest expense on debt out of its operating income. The higher the number, the better.

On this measure of financial fortitude, Seagate is able to cover its interest expense 6.92 times, while Western Digital has a lower interest coverage ratio, at 5.35 times.

Looking ahead, Western Digital's management sees an oversupply in flash products, which will push pricing and gross margin down in fiscal 2019. The company is targeting 4% to 8% annual top-line growth over the long term. Analysts currently expect Western Digital to grow earnings 5.6% annually over the next five years.

Seagate grew revenue 4% last year, driven by an increase in total exabytes shipped and higher demand for HDDs. Lower operating expenses and share repurchases caused non-GAAP earnings per share to surge 34% for the year. However, analysts expect Seagate to grow earnings just 7.1% annually over the next five years.

The lower growth estimates stem from uncertainty about how much further Seagate and Western Digital can cut costs to offset potential downturns in pricing. The cyclical nature of the industry has caused both companies' top lines to not move much in recent years (excluding acquisitions). Seagate's revenue has actually declined, as you can see in the orange line in this chart. 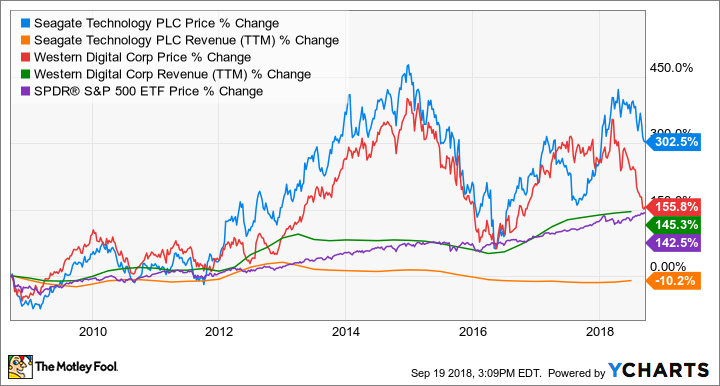 The pricing environment has been strong for the last several quarters, but some analysts believe that may come to an end next year. This is not surprising, because the industry is notorious for periods of price increases followed by periods of oversupply as competitors rush to fill the void, inevitably causing prices to drop.

Western Digital recently posted faster growth than Seagate and has more diversification due to its leadership in the SSD market. Setting aside concerns about pricing, which affect both companies, I like Western Digital's competitive position over the long term.

Both companies have a history of paying dividends and using share repurchases to return capital to shareholders. Seagate's dividend currently yields 5.1%, which is much higher than Western Digital's dividend yield of 3.3%.

Although Western Digital has more room to increase its dividend payout, management seems determined to stick with share repurchases, as evident in the company's new $5 billion repurchase program announced last quarter. I think Seagate's decision to return more cash in the form of dividends may be a smarter move going forward, given the cyclical nature of the industry.

Valuation is a key consideration for a lot of investors. This table shows how the two stocks match up on a variety of popular valuation metrics:

The trailing P/E is thrown off for both companies because of a one-time provisional expense as a result of U.S. tax reform. On every other metric, it's clear that Western Digital is the better deal.

The winner? It's a tie

There's really not a lot to separate these companies. To be honest, I'm not a huge fan of storage stocks. I think they carry too much risk with respect to pricing cyclicality, which makes it very difficult to gauge the future trajectory of revenue and earnings.

This is probably why these stocks have such low valuations right now. Investors don't want to pay too much for earnings (the "e" in P/E), fearing that a downturn in pricing would cause profitability to dwindle at Seagate and Western Digital.

I wouldn't want to own either stock right now, nor pick either of these stocks to outperform on my CAPS profile.