Historically, the performance of data storage companies has been closely tied to the growth of PC shipments (or lack thereof). Seagate Technology (NASDAQ:STX) and Western Digital (NASDAQ:WDC) have a near duopoly in the hard disk drive (HDD) market, which has been steadily declining in recent years as fewer PCs are being shipped annually and new storage technology emerges.

These companies are making up for lower PC demand with increased demand from enterprise customers, as cloud providers are accumulating more and more data and buying more HDDs. Data around the world is growing about 35% annually, according to market intelligence firm IDC. This far outpaces the growth in storage shipped, which only equals about 5% of data created.

But there are other issues Seagate and Western Digital have to deal with, such as declining prices stemming from a very competitive market and declining hard disk shipments. These issues make it very difficult to predict where these companies will stand over the long term. 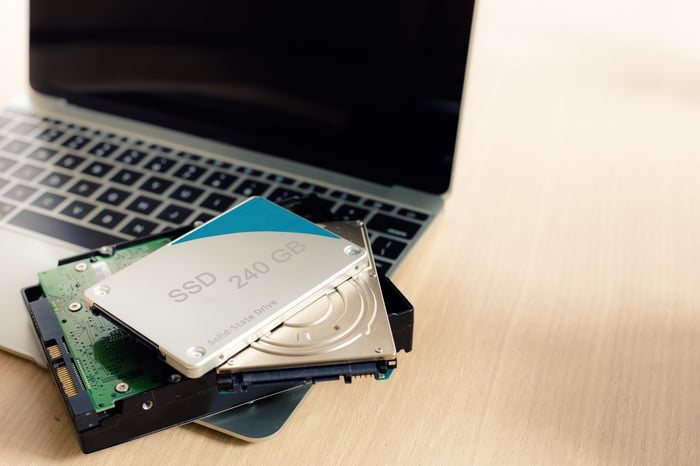 The state of the storage market

Still, while shipments of HDDs are declining, Seagate and Western are seeing the total capacity shipped increase as data centers are attracted to the higher capacities and cost effectiveness of going with HDDs. Basically, data storage companies are seeing a decline in consumer demand but growing demand from enterprise for HDDs. As a result, IDC estimates that the HDD market will remain flat at $24 billion over the next few years.

But eventually, the advantages that SSDs offer, such as lower power consumption and faster data retrieval, will help them win out over the clunky, slower HDDs. The SSD market is expected to grow about 15% per year through 2025, according to Grand View Research.

Western Digital is much better positioned in the SSD market than main rival Seagate. In 2016, Western acquired SanDisk, the maker of NAND flash memory (the storage technology used in SSDs) that's No. 3 in market share at 15%. Western derived 52% of its revenue from HDDs in the third quarter, whereas Seagate generates over 90% of its annual revenue from HDDs. This leaves less than 10% of Seagate's revenue coming from SSDs, which exposes Seagate more than its rival to a declining HDD market.

Seagate management has been content to focus primarily on serving enterprise customers in the HDD market. This is fine for now, since there is healthy HDD demand from data centers. But data centers are also gradually ramping up their buying of SSDs, since they are more efficient. As SSD technology develops and prices come down, there is a lot of uncertainty longer term as to whether Seagate will be adequately positioned if SSD adoption accelerates.

Western Digital is clearly better positioned for SSD adoption than Seagate, but it won't be clear sailing for Western. SSD growth is a double-edged sword, since advances in flash storage technology will undoubtedly cause selling prices to rapidly decline. Lower selling prices present the biggest risk for these storage drive makers. Some of this pricing pressure stems from deep-pocketed rivals -- like Intel and Samsung, just to name two -- vying for position in the storage market.

To give an idea of what investors can expect, let's look at history to see how changes in pricing have impacted Seagate's revenue.

Between 2010 and 2013, Seagate's annual revenue whipsawed as the industry experienced volatile shifts in supply and demand for disk drives. In 2010, Seagate's revenue spiked 16% from an industrywide supply shortage. A year later, as companies caught up with demand, there was an oversupply, causing Seagate's revenue to decrease 4%. Flooding that damaged factories in Thailand in 2012 caused a severe shortage and a spike in selling prices, which sent Seagate's revenue soaring 36%. Over the last five years, Seagate has seen its revenue gradually dwindle, as this table shows.

Since 2013, Seagate has blamed price erosion from declining PC sales for its decline in revenue. This has hit Seagate harder than Western Digital, since Western has been more active in making acquisitions to diversify. Here's how Western Digital has fared over the last five years:

As the table shows, Western Digital has actually managed to increase gross margin even while dealing with the same headwinds on pricing as Seagate. One way Western has been able to control costs is by acquiring component suppliers, giving it more control over more points of the supply chain. There could be more consolidation in the industry as companies seek to offset declining prices by looking for synergies with other companies to reduce costs.

The growth of data presents a big opportunity for Seagate and Western Digital, but Seagate is simply too dependent on the declining HDD market for me to have confidence it can capitalize on SSD adoption. Western's improving profitability from an effective cost-reducing strategy and diversification makes it the far less risky stock.

But I would still tread carefully in the storage industry. There are too many unknowns with respect to competition and its potential impact on pricing trends, making it difficult to predict what these companies' earnings streams will look like over the long term.