Caesars Entertainment (NASDAQ:CZR) looks to finally be establishing a presence in Macau, registering its Flamingo and Cromwell properties for trademark protection there. With international markets the focus of the casino operator's post-bankruptcy plans, and the potential for new licenses to be issued by Macau regulators during the upcoming concession renewals, Caesars appears to be getting its ducks in a row.

When Macau issued gaming concessions in 2002, Caesars backed out of entering the market because it didn't think gambling in China would be profitable. Now that the one-year anniversary of its emergence from bankruptcy is fast approaching, Caesars has made it clear that it wants to seize more global opportunities.

The gaming and hotel operator is branding and managing two luxury hotels in Dubai (its first nongaming resorts); developing a nongaming resort in Mexico; launching a worldwide branding and licensing campaign for the Flamingo, The Cromwell, and LINQ brands; and breaking ground on its first Asian casino in Incheon, South Korea.

Caesars wants one of the three gaming licenses Japan will soon issue, saying it will "invest whatever it takes" should it win one. 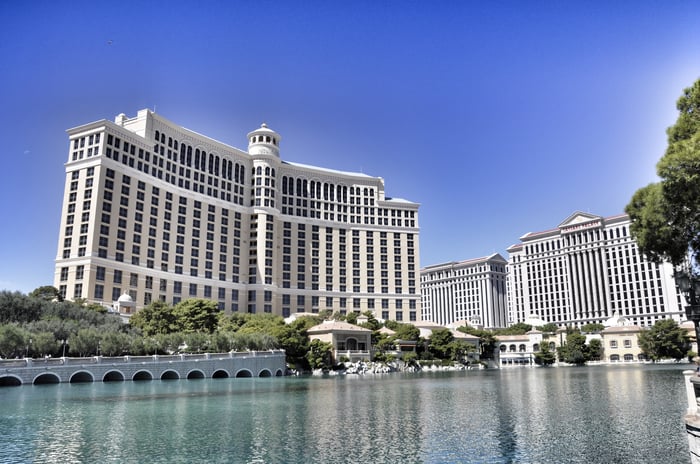 Caesars Palace in Las Vegas could get a sibling in Macau. Image source: Getty Images.

Macau turmoil on the horizon

Caesars' trademark applications in Macau cover casino services, casino management, and gaming services, as well as hotels, restaurants, entertainment facilities, and nightclubs. Although there are only six gaming concessions in Macau, MGM Resorts and SJM Holdings are coming up for license renewal in 2020, followed two years later by Wynn Resorts (NASDAQ:WYNN), Las Vegas Sands (NYSE:LVS), Galaxy Entertainment, and Melco Resorts & Entertainment. The process for reviewing and reissuing the concessions is unknown.

When Macau first issued concessions, there were only supposed to be three, but regulators created three more. Today, over 40 casinos operate in the region under the umbrella of the original operators, but when the concessions are renewed, regulators may change everything because of displeasure over the original process.

Analysts believe it's possible the 20-year license lease could be shortened, the number of domestic operators could be increased, and the overall number of concessions expanded. Recently, the tiny Chinese island of Hainan was authorized to allow gaming in hotels and other noncasino locations, though winnings are paid in hotel amenities, not cash.

Caesars would likely jump at the chance to grab a new license, since Macau has more than proved itself profitable as it is the world's largest gaming market. Trademarking its property names now would have it ready to go if there's a chance for a new license (it registered the Caesars name last year).

The registration would also prevent others from fraudulently using the brand names. Last month, Wynn Macau warned in regulatory filings that Asian online gambling and investment sites were illegally using its name to scam the public, and cited the practice as one of the factors affecting its performance. Caesars itself lost a trademark case to a Thailand massage parlor that had registered the caesarentertainment.com website.

Caesars Entertainment has big growth plans now that it is more financially fit. Although it passed on Macau previously, it seems ready to avoid repeating that mistake if Chinese regulators authorize more licenses.