It started with bookstores, convenience stores without cashiers, and upscale grocers, but Amazon's latest retail concept is something altogether different.

For longtime followers of Amazon (AMZN -1.57%), it isn't a surprise that the company has aspirations in the brick-and-mortar retail space. In late 2015, Amazon opened the first of many bookstores, debuted the (cashier-less) Amazon Go convenience stores in late 2016, and made its biggest foray into physical retail with the acquisition of Whole Foods in August 2017.

Amazon Pop-Up stores have received much less fanfare, but they have appeared in shopping malls, Whole Foods, and Kohl's stores. These dozens of smaller retail spaces are designed to highlight the company's branded electronic devices, like its Kindle e-readers, Echo smart speakers, and other Alexa-powered devices, as well as a host of smart-home products.

Now the e-commerce giant is taking everything it's learned and created a whole new concept store.

Amazon will be debuting a new physical store that only carries items that were top sellers on its website, rated four stars or higher, or are new and trending, according to a blog post from Wednesday.

The initial location in New York's Soho neighborhood will open on Sept. 27, and will carry some of the most popular categories from its online store, including devices, consumer electronics, kitchen, home, toys, books, and games.

The list of carefully curated products is organized into various groupings, like "Most-Wished-For," "Trending Around NYC," and "Frequently Bought Together," as well as "Amazon Exclusives," which are a direct reflection of the depth of information Amazon has on its customers.

The shelves also feature actual customer reviews posted on them, as well as a digital price tag -- which includes full retail and Prime discounted prices -- star ratings, and the number of customer reviews. This strategy is similar to one the company has used successfully in organizing its bookstores.

With reams of customer data, Amazon knows not only what sells, but what sells better in given geographical locations thanks to the granular nature of its data. 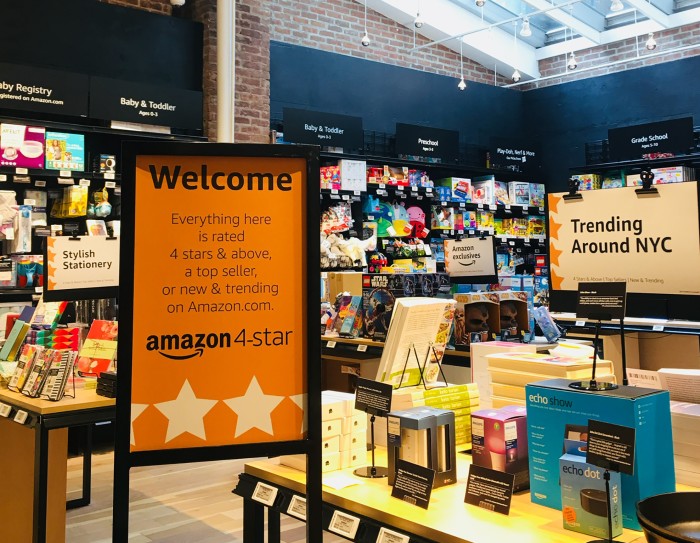 The number of physical retail locations bearing the Amazon logo is growing at a rapid pace. The company currently has about 20 bookstores, an estimated 470 Whole Foods stores, and dozens of Pop-Up locations. Amazon Go -- the company's cashier-less convenience store -- just opened its fourth location, but the company may have plans for as many as 3,000.

It's clear that Amazon sees physical retail as a way to connect with existing and potential customers, giving it a place to demonstrate products and ask questions that simply aren't practical on its website. It's also likely targeting additional revenue growth.

By some accounts, Amazon nabbed 44% of all digital sales in the U.S. last year and nearly 4% of all retail -- and that number is sure to climb in 2018. These physical stores are about reaching consumers who aren't shopping at Amazon, as well as increasing its relationship with existing shoppers.

Stay tuned -- there will likely be more Amazon stores coming to a location near you.