Value investors may want to keep this ticker symbol handy.

In this series, I offer quick takes on investment candidates that are worthy of jotting down on a sticky note and leaving on the corner of your desk -- or refrigerator, where I tend to stick mine!

Such stocks may not represent conviction buys just yet, but I believe they deserve a spot on your watch list for potential accumulation.

Prospective stocks are typically younger and/or smaller-capitalization companies, but they also include value plays and dethroned market leaders that may deserve a second look. Arcos Dorados Holdings (ARCO -0.92%) is the largest global McDonald's (MCD 2.14%) franchisee, with more than 2,100 locations throughout Latin America and the Caribbean. The company has a market capitalization of $1.3 billion. Based in Montevideo, Uruguay, Arcos operates under a master franchise agreement (MFA) with McDonald's, which runs through 2027 before its next renewal. Company-owned restaurants and franchised locations under the McDonald's banner are operated in 20 separate geographic territories.

Why you should put Arcos Dorados on a sticky note

Arcos Dorados is a value play in the global quick-service restaurant market. The company found itself over-leveraged in late 2015 due to years of debt-fueled restaurant expansion, and spent the next 1.5 years stabilizing its balance sheet. Shares are down 47% over the last five years.

Even as Arcos has stabilized its financial operations, the company has dealt with rapid inflation in Venezuela, Argentina, and Brazil. This has crimped its earnings, as Arcos reports results in its chosen home currency -- the U.S. dollar. To cite one example, in Brazil, Arcos' largest market, the base currency (the Brazilian real) has plunged 22% year to date against the U.S. dollar, due to political unrest tied to Brazil's upcoming national election in October.

Despite inflationary and macro-economic headwinds, the company continues to expand, and is on track to open 200 new restaurants (most of them free-standing) in the three-year period ending in 2020, under the company's MFA with McDonald's. Arcos has also committed to a $390 million spend on restaurant modernization, including electronic ordering kiosks under McDonald's "Experience of the Future" EOTF program.

For those who possess both a strong constitution and an ample store of patience, these shares represent a buying opportunity, as eventually, Arcos' revenue and earnings will improve as Latin American currencies normalize against the U.S. dollar.

Let's take a brief walk through some key metrics and ratios from Arcos Dorados' last 12 months of reported results:

Despite the inflationary and foreign currency translation issues I've discussed above, you can see that Arcos still manages a decent revenue growth rate and is profitable even on a U.S. dollar basis -- evidence of the strength of the company's underlying business.

The greatest risk for prospective investors to consider can be found by looking at Arcos' stock chart history. The "ARCO" symbol tends to move in sweeping positive and negative trends, neither of which resolve themselves overnight: 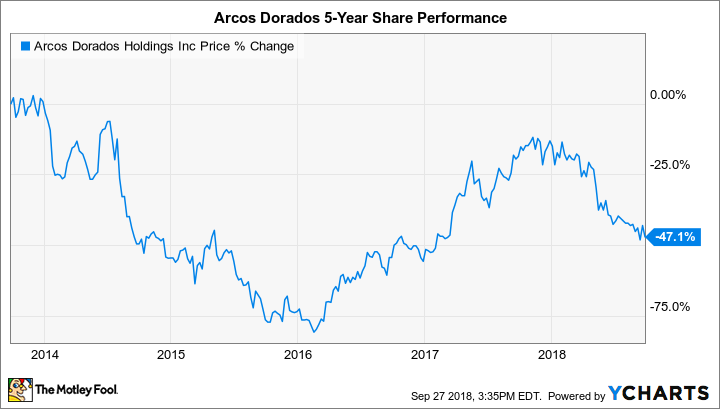 It's also worth noting that although most Latin American economies are following the rest of the world and posting moderate gross domestic product (GDP) expansion on a quarterly basis, it's difficult to predict at what point economic growth will translate into sustained strength for their respective currencies. In other words, it's ambiguous when the best eventual catalyst for a share price recovery for Arcos will materialize.

Jot down Arcos Dorados on a nearby sticky note, and don't forget about this huge McDonald's franchisee, which sports an aggressive bent for growth that will eventually be recognized by the market. Adventurous investors can start accumulating a few shares now.