Please ensure Javascript is enabled for purposes of website accessibility
Log In Help Join The Motley Fool
Free Article Join Over 1 Million Premium Members And Get More In-Depth Stock Guidance and Research
By Lou Whiteman – Sep 28, 2018 at 8:20AM

The helicopter contract is Boeing Defense's second upset win in the last 30 days.

The defense arm of Boeing (BA -3.39%) has scored its second massive win this month. That sparked optimism for a business that has played second fiddle of late to the company's massive commercial aviation unit, but may finally be revving up its own growth engine.

A team including Boeing and Italy's Leonardo (FINMY -2.67%) won a U.S. Air Force competition to replace the UH-1N Huey helicopters used for missions such as guarding the nation's nuclear missile silos. The Air Force has awarded $375.6 million for four MH-139 helicopters, the first step in what is expected to be an 84-helicopter order worth $2.38 billion. 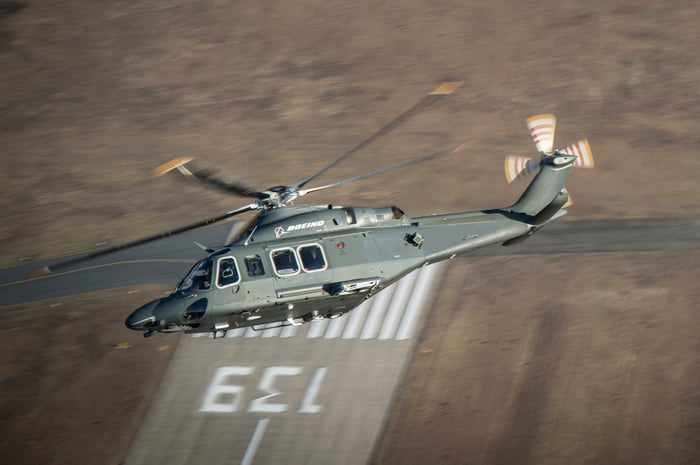 The Boeing team beat out competing bids from Lockheed Martin (LMT -0.90%) and Sierra Nevada Corporation, each based on the UH-60 Black Hawk helicopter. Given the military's extensive experience with Lockheed Martin-made UH-60s, and its initial plans to sole-source Black Hawks to replace the aging Hueys instead of holding a competition, the Boeing-Leonardo win should be viewed as an upset.

Given how rare major Air Force awards are, the Boeing win is likely to come under protest by competitors. Earlier this year Lockheed Martin lost a pre-award protest over the amount of intellectual property the government was asking competitors to hand over if they were selected; it seems likely to pick apart this decision carefully.

Boeing's on a roll

The winning design is based on Leonardo's AW139, which boasts more than 250 government, military, and corporate customers worldwide, but which has been so far unable to establish a foothold with the U.S. government. The helicopters will be built by Leonardo Helicopters at facilities outside of Philadelphia, with initial deliveries scheduled for 2021 and production potentially continuing through 2031.

In its bid, Boeing pitched the AW139's more than 2 million flight hours and established supply chain as factors that could reduce program uncertainty and drive cost savings. Indeed, the Air Force praised the competition for substantially reducing the overall cost from an initial $4.1 billion estimate.

Boeing vice president David Koopersmith said in a statement that the winning design "exceeds mission requirements, it's also ideal for VIP transport, and it offers the Air Force up to $1 billion in acquisition and lifecycle cost savings."

The win continues a turnaround story inside of Boeing Defense, a unit that accounts for barely one-fifth of total company revenue and which has been increasingly marginalized in recent years due to the success of commercial designs like the 737 and 787 Dreamliner.

The unit's flagship program, the KC-46 tanker, has been plagued by delays and cost overruns that led Air Force Secretary Heather Wilson in March to lash out at Boeing and question whether the company is overfocused on its commercial operations to the detriment of defense projects.

This is the second upset win for Boeing Defense in the last 30 days, following an $805 million contract award to design and build MQ-25A U.S. Navy refueling drones. Assuming all goes well, the Navy is expected to order upward of 72 of the aircraft at a cost of more than $10 billion.

More good news could be on the horizon. Boeing is one of three finalists, along with Lockheed and Leonardo, for a $16 billion contract to build new T-X fighter trainers that could be announced any day now.

The award also introduces new risks, both to Boeing and Lockheed. The Air Force deal is a firm fixed-price contract, meaning Boeing and Leonardo will be on the hook for cost overruns. Boeing's troubled KC-46 win came with similar stipulations, and the company to date has taken charges of more than $3.4 billion due to higher-than-expected development costs.

Boeing is likely hopeful that given the AW139's track record, the development will be straightforward. But the KC-46 is based on the company's mainstay 767 commercial jet. Modifications, by their nature, can lead to unexpected complexities, and investors should be cautious about this and other fixed-price contracts until deliveries begin.

The win is also a milestone for Leonardo, which has been looking to increase its U.S. government business. The company's U.S. arm in 2014 unsuccessfully sued the U.S. Army over the branch's decision to buy Lakota helicopters from Airbus, and has also bid for contracts including a Marine One presidential transport won by Lockheed.

An established Leonardo could complicate things for all U.S. contractors, and Lockheed Martin in particular. Lockheed invested heavily in helicopters in 2015 via its $9 billion purchase of Sikorsky from United Technologies, a deal criticized as rich in part because so few major helicopter contracts come up for bid. Sikorsky under Lockheed has done a good job winning new orders, but should expect to go up against strong bids from Leonardo as new opportunities arise.

It's hard to blame Boeing investors for focusing on commercial sales. Even after these wins by Defense, don't expect that unit to take over the spotlight. But the surge in commercial jet orders, now nearly a decade old, must end at some point, and Boeing will need to fall back on a stable and competitive defense business when that eventually happens.

Just 18 months ago, Boeing Defense was arguably in no position to pick up the slack if commercial demand had fallen off. These recent wins suggest that an internal overhaul earlier this year had the desired impact, and Boeing Defense is back.

Shares of Boeing have been a great investment, up 183% over the past three years and 541% over the last decade. With Defense in its arsenal, the company has the ability to sustain that momentum even after commercial sales eventually slow down.