This move closes a long and complicated story in the battle for the European pay-TV provider.

The battle for European cable operator Sky PLC (NASDAQOTH: SKYAY) was largely decided this past weekend when U.S. cable operator Comcast (CMCSA 0.07%) prevailed against Twenty-First Century Fox (FOXA) (FOX) in a rare auction held by U.K. regulators. With a winning offer of 17.28 British pounds per share, or about $22.78 at current exchange rates, Comcast succeeded in its bid to acquire a 61% stake in Sky for about $38.8 billion.

This came on the heels of Disney (DIS 3.51%) winning out over Comcast in its efforts to acquire Fox in a bidding war that drove to $71 billion.

The one question that remained unanswered was what Fox and Disney would do with the 39% stake in Sky that Fox already owned. 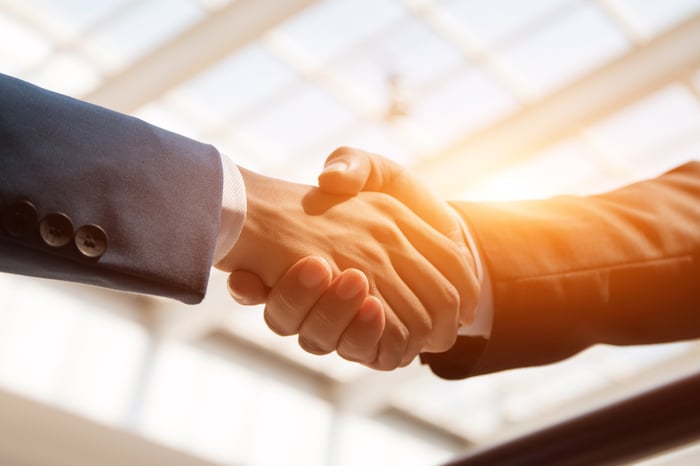 Fox announced on Wednesday that it intended to sell its Sky shares to Comcast at a price of 17.28 pounds per share, or about $22.74 -- the same price that Comcast offered in the winning bid. This will add more than $15 billion to Disney's coffers and end a bruising battle of corporate one-upmanship.

In a press release, Fox said, "In light of the premium Comcast has agreed to pay for Sky, we and Disney have decided to sell 21st Century Fox's existing 39% holding in Sky to Comcast. We congratulate Comcast on their pending acquisition."

In its own prepared statement, Disney said it concurred with Fox's decision and that the transaction, along with what it would get from the divestiture of Fox's regional sports networks, would significantly reduce the amount of debt the company would incur from acquiring Fox, helping the company maintain a strong balance sheet and allowing it to continue to develop content for its budding streaming business.

"Along with the net proceeds from the divestiture of the [regional sports networks], the sale of Fox's Sky holdings will substantially reduce the cost of our overall acquisition and allow us to aggressively invest in building and creating high-quality content for our direct-to-consumer platforms to meet the growing demands of viewers," said Robert A. Iger, chairman and chief executive officer of the Walt Disney Company.

The fierce bidding that erupted for Fox and subsequently for Sky cost both Disney and Comcast dearly. Disney's original bid for Fox was for $52.4 billion, which eventually ballooned to $71.3 billion, a 36% premium to Disney's initial offer. Comcast faced a similar outcome with Sky, paying about $38.8 billion, a 38% premium to its preliminary bid and 61% higher than Fox's opening salvo.

The market's reaction to Comcast's winning bid is telling, as its stock initially fell by as much as 8% before closing down about 6%. This illustrates the widespread belief that Comcast vastly overpaid to secure the winning bid for Sky. At the same time, Disney's stock initially rose 2% and has continued to climb -- now near multiyear highs -- in the wake of Fox's decision to sell its stake in Sky. Wall Street clearly believes that Disney got the better end of the bargain.

Just as my colleague Adam Levine-Weinberg predicted, "[Disney] should direct Fox to tender its shares to Comcast, thereby reducing the total cost of the Disney–Fox deal by a substantial sum."