Stocks opened higher on news that the U.S., Mexico, and Canada have reached an agreement on trade. Major benchmarks drifted lower during the day but still finished with gains. The Dow Jones Industrial Average (DJINDICES:^DJI) and the S&P 500 (SNPINDEX:^GSPC) were up but closed below record highs. 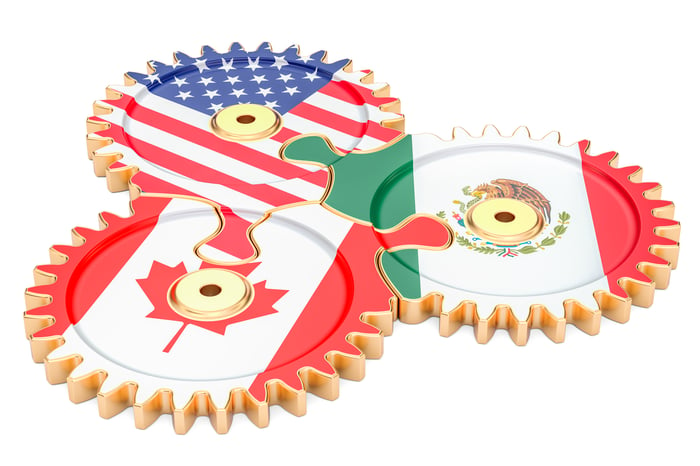 Time's up for GE's CEO

General Electric surprised the market by firing CEO John Flannery after only 14 months on the job, and investors applauded the news, pushing up the stock 7.1%. By unanimous vote, GE's board named Lawrence Culp, former CEO of Danaher Corp., as Flannery's successor as CEO and chairman, effective immediately. The board also named Thomas Horton, former CEO of American Airlines, as lead director. Both men were added to GE's board in April.

GE also revealed that its troubled GE Power unit is performing even worse that previously expected, and as a result, the company will fall short of its full-year guidance for EPS of $1.00 to $1.07 and free cash flow of $6 billion. GE Power will also take an non-cash impairment charge of most of the $23 billion of goodwill on its books, wiping away the lingering reminder of some disastrous acquisitions.

Culp said in the press release:

GE remains a fundamentally strong company with great businesses and tremendous talent. It is a privilege to be asked to lead this iconic company. We will be working very hard in the coming weeks to drive superior execution, and we will move with urgency.

Urgency is clearly something investors felt was lacking during Flannery's brief reign. Flannery was essentially asking investors for patience with a multiyear turnaround, but it's clear from the stock's 50% plunge during his tenure and the board's action today that his approach just wasn't cutting it.

Musk settles with the SEC, will stay on as CEO

After Tesla's stock was pounded Friday on news that the Securities and Exchange Commission was suing CEO Elon Musk for fraud, reports over the weekend that Musk reversed himself and settled the lawsuit sent the stock back up 17.4%, recovering the ground it lost and more. The SEC announced that Musk agreed to a deal that was not quite as good as the one reportedly offered last Thursday, with the unpredictable entrepreneur remaining as CEO and as a board member, but agreeing to step down as the company's chairman for three years and paying a fine of $20 million.

This week the SEC also charged Tesla with failing to have required disclosure controls and procedures relating to Musk's communication, and the company agreed to settle as well. Tesla will add two new independent board members, put in place controls on Musk's communication, and pay a $20 million fine. The $40 million in penalties will be distributed to shareholders that were harmed, under a court-approved process.

The fines amount to no more than a slap on the wrist for Musk and the company, but the fact that Musk will remain in Tesla's leadership with a muzzle on his Twitter account could represent a nice win for the company's shareholders. With the going-private distraction apparently out of the way, investor attention can now turn to Tesla's Q3 production and delivery numbers, which could be coming out as early as tomorrow.