Walmart's (NYSE:WMT) recent focus on online grocery selling has taken over the headlines of the company's growing online sales. It's undoubtedly been a big reason why it was able to grow online revenue 40% year over year in the second quarter. Management pointed to it as a reason it believes it will maintain that level of growth over the full year 2018, and it made it a major focus of its Jet.com redesign.

But what's gotten lost in Walmart's online sales growth story is that third-party sellers continue to flock to its online marketplace as an alternative to Amazon.com (NASDAQ:AMZN). As Amazon's marketplace becomes increasingly crowded, third-party merchants are looking for alternatives where they can stand out more easily. Walmart's sales growth makes it very attractive for sellers to experiment with, and Walmart is taking steps to attract more third-party merchants. 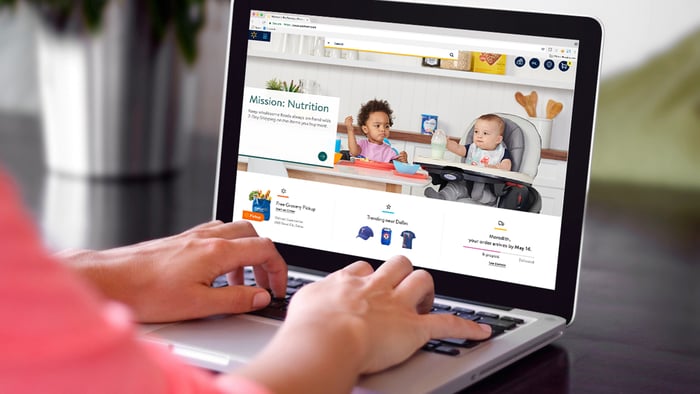 Amazon is the largest marketplace for third-party merchants in the U.S. In fact, more than half of Amazon's online sales come from third parties, a number that's grown steadily over the last five years. Amazon can drive a lot of value for online sellers since nearly half of all online product searches start on the company's website. The popularity of Prime and the ease of making items eligible for Prime shipping also makes it attractive.

No other marketplace offers the same level of reach, growth, and convenience as Amazon. That said, 80% of Amazon sellers are also selling through other channels.

eBay (NASDAQ:EBAY) notably offers strong reach, but sellers are completely responsible for fulfillment, and most customer service responsibilities fall in their court as well. Small sellers are moving away from eBay as an alternative to Amazon, according to a recent survey from Feedvisor. 65% of Amazon merchants also sold on eBay in 2017, but that number fell to just 52% in 2018.

Walmart's strong online sales growth and considerable reach have made it an increasingly popular alternative. 25% of merchants also sold on either Walmart or Jet.com this year, according to the Feedvisor data. That's up from a combined 17% last year. Additionally, 36% of Amazon sellers are considering expanding to Walmart's online marketplace this year, up from 29% expressing interest last year. That's also better than the 27% of sellers considering expansion to eBay.

Interestingly, merchants are also moving away from selling on their own websites. That indicates that ease and convenience are a big factor for small online retailers, and they'd rather sell in a marketplace.

Walmart has taken several steps over the last year or so to develop new third-party seller solutions.

Last month, the company sent a memo to merchants about improving the return process for orders. It promised that, "New functionality will make it easier, faster and more efficient for you to manage returns on our platform." It also said it will enable merchants to use the company's return shipping service, which provides discounted shipping rates. In the future, Walmart may enable in-store returns at its 4,700 retail locations, helping merchants save even more.

It's not quite to the level of Fulfilled by Amazon, Amazon's warehousing and shipping service, but it's a step toward making selling on Walmart.com more convenient.

Walmart is also partnering with higher-end retailers to make its website more of a destination for high-end brands. The company's image is largely associated with discount prices and value brands. That can deter many third-party sellers from listing products on Walmart's marketplace, because nobody's looking for those items on Walmart.com. The shift to more upscale items should eventually trickle down to third-party merchants, improving their sales.

Walmart still has a lot of work to do if it wants to take on Amazon's third-party sales. Amazon will take about half of all online sales in the U.S. this year. So, even as Walmart becomes an attractive alternative for sellers and grows its overall sales, the majority of third-party seller sales will still come from Amazon.com. That trend is only favoring Amazon.

Third-party seller services is a major source of revenue for Amazon, accounting for 18% of total sales in the second quarter. The growth of merchants on the platform is also fueling the growth of its highly profitable advertising business.

Walmart may be becoming an attractive alternative to Amazon, but sellers aren't going to be leaving the leader in the space. If anything, Walmart's recent success is more of a threat to other alternatives like eBay.