Right now, three stocks account for almost 40% of my real-life holdings. That's a level of concentration that many might consider dangerous. But while I do have limits for how large I'll allow a position to get, I am very comfortable with my allocation right now.

That's because these three companies -- Amazon (NASDAQ:AMZN), Alphabet (NASDAQ:GOOG) (NASDAQ:GOOGL), and Intuitive Surgical (NASDAQ:ISRG) -- share the three characteristics I value above all else in my portfolio: a wide and defendable moat, multiple ways of growing their businesses, and stellar balance sheets. 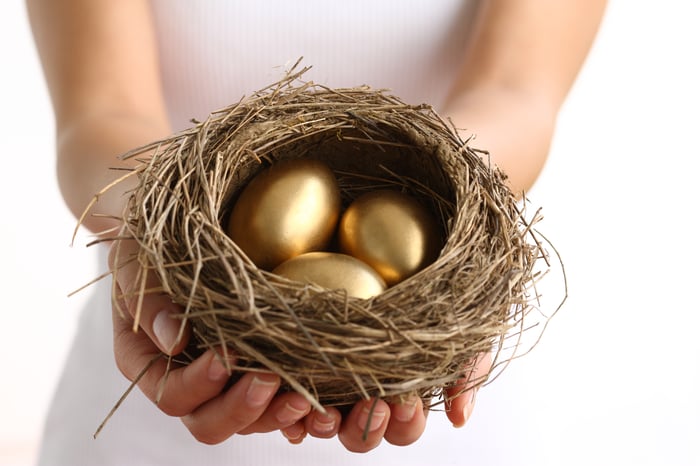 These three are key parts of my nest egg. Image source: Getty Images.

Imagine you have a time machine. You go back 20 years and explain to a 1998 denizen that Amazon will become the "Everything Store." It might be difficult to understand how it got from Point A to Point B. But a look at my three criteria quickly fills in the gaps.

Amazon's moat is fourfold. In reverse order of importance:

But if you think Amazon is resting on its laurels, think again. The company's mission is to be Earth's most customer-centric company -- and there's no fence you can put around that. Groceries, shipping, cloud computing -- who knows which industry will be disrupted next?

The fact of the matter is Amazon has the vision and flexibility to continue innovating. With founder/CEO Jeff Bezos at the helm, over $27 billion in cash and investments in the bank, and free cash flow clocking in at $8 billion for the past year, I intend to continue riding Amazon stock higher.

Outside of Facebook, no company -- or government agency -- has as much data on its hands as Alphabet. The parent company to Google has seven different services with over 1 billion users: Search, Maps, Gmail, Chrome, Android, YouTube, and Google Play Store. With a few exceptions, these services are completely free. In return, Google collects gobs of data it can then turn around and sell to advertisers.

Here's where the key moat is: Because this data is today's version of oil, and because Google has such dominant positions in all seven of the aforementioned services, it can collect data at a far lower internal cost than anyone else. That has led to a balance sheet flush with $114 billion in cash and investments, and free cash flow of over $21 billion in the past 12 months.

That money is going toward Alphabet's really big ambitions: its "Other Bets." While many of these experiments might die before ever coming public, all it will take is just one to notably move the company's revenue needle. Already, it's becoming clear that its self-driving Waymo unit could be huge -- being valued as high as $175 billion!

The future of surgery is here...to stay

Finally, we have a company many of you may not know about: Intuitive Surgical. This is the company behind the world's most-oft-used surgical robot, the daVinci Xi.

Right now, there are almost 4,700 installed daVinci systems worldwide. Therein lies Intuitive Surgical's key moat: Hospitals have spent millions of dollars buying these systems -- and doctors have spent much of their professional lives training on them. As a result, the switching costs away from daVinci and to another platform are very high.

Additionally, as more and more doctors start using the robots, they will continue to tinker with applications in ever-more surgeries. Five years ago, for instance, gynecological and prostate operations accounted for the vast majority of Intuitive's procedures. Over the past five years, however, several more have been realized -- led by hernia operations. There's no telling how many surgeries will be improved with the use of these robots, but I'm willing to be we're currently just scratching the surface.

Intuitive has become a cash machine lately, churning out over $1 billion in free cash flow, adding to the already impressive $4.3 billion war chest on the balance sheet. While those numbers might seem small next to Amazon's and Alphabet's, it's worth remembering that Intuitive's entire market cap is a fraction of these two behemoths.

Does this mean you should go out and buy as many of these shares as you can? Hardly. I built my positions in these companies over time. And while I have no intention of selling any of these three, at times they grow to such a large portion of my holdings that it's the prudent thing to do.

If you have a long-term time horizon and wouldn't mind learning more about these three, I think they are excellent places to start on your own investment journey.