It's the first time in 60 years pro athletes will be able to appear in ads.

Watching a baseball game on television means you don't hear the familiar refrain "Beer here!" from concession workers plying the crowds. And you don't see professional ballplayers featured in the many beer commercials that air during the game, because in most sports, such shilling is frowned upon. (The National Football League outright prohibits it.) But that's all changing now, as Anheuser-Busch InBev (BUD 2.37%) completed a marketing agreement with the players union of Major League Baseball to begin allowing current players to appear in its ads. It reached a similar deal with the National Basketball Association's players union, and others may soon follow.

It's the first time in 60 years that sports stars will be free to appear in a commercial for an alcoholic beverage, though you won't see players holding or drinking beer. That's still a bridge too far. 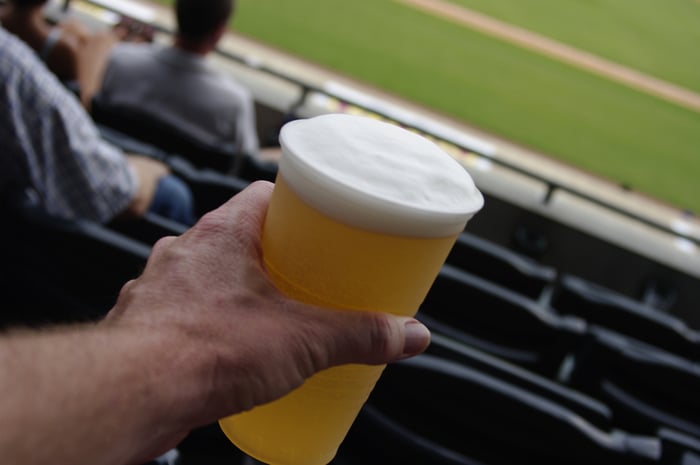 Beer and sports both in decline

Allowing players to appear in beer ads was a change that was bound to happen. For Anheuser-Busch, it was imperative, as it needs something to make its beer more relevant to consumers. Although global revenues rose nearly 5% last quarter, like much of the rest of the beer industry, U.S. shipments and volumes continued their years-long decline. Year to date, U.S. sales-to-wholesalers were down 4.8%, and sales to retailers were off 3.2%. It says something when A-B loses 35 basis points of domestic market share in the quarter and CEO Carlos Brito says that was the company's "best quarterly market share performance in almost four years."

The sports leagues need this, too. Although viewership of basketball games soared to a four-year high for the 2017-2018 season, baseball game viewership was down 6% last year, and football TV ratings tumbled 10% in 2017, following an 8% decline the year before. Attendance is also suffering, with baseball having its lowest average in 15 years.

The leagues have softened their stance on alcohol advertising in recent years, giving players new ways to get into the public eye. Where baseball and hockey have allowed distillers to advertise spirits within the broadcast camera's view during the games for years, the NBA only allowed it beginning in 2009, following the Great Recession. It wasn't until last year that the NFL allowed spirits to be advertised on TV during its games.

Other taboos have fallen by the wayside as well. Even though the leagues adamantly opposed allowing betting on sports games, once it became legal to do so, they began trying to negotiate to receive a cut of the money bet, and casino operator MGM Resorts became the official sportsbook of the NBA.

While it may seem a bit incongruous to think that elite, all-star athletes are training for their profession by drinking a beer after their workout, early on in this millennium, Anheuser-Busch successfully used its low-carb Michelob Ultra brand to push the notion that beer was the perfect post-workout beverage, a marketing strategy that caused sales to soar. Today, Michelob Ultra is the brewer's top market share gainer, a position it's held for 13 straight quarters.

Allowing sports players to appear in beer ads seems like a logical progression, though whether it will help boost beer sales or TV ratings and attendance remains to be seen. Federal regulations, after all, discourage marketing that suggests athletic prowess is related to alcohol consumption.

Beer's share of the alcoholic-beverage market has fallen from 59% to 46% over the past two decades, but with access to the most popular pro sports stars and the millions of people who follow them, Anheuser-Busch InBev at least has a sporting chance to turn things around.