Roku (NASDAQ:ROKU) has been one of the market's bigger losers over the past week. Shares of the streaming media middleman have plummeted 14% over the past five trading days through Monday's close, weakening after reports claimed that Amazon (NASDAQ:AMZN) subsidiary IMDB is rolling out an ad-supported video service along the lines of Roku Channel. An analyst initiating coverage with a neutral rating after the initial sell-off didn't help.

Last week started out promising. Needham analyst Laura Martin -- one of the more vocal Roku bulls -- raised her price target on the shares from $60 to $85, and the move sent the stock up to a new all-time high. It was all downhill from there, though. Reports of potential fresh competition from Amazon nipped the rally at its peak, leading sellers to wonder if Roku can hold up against the serial disruptor. 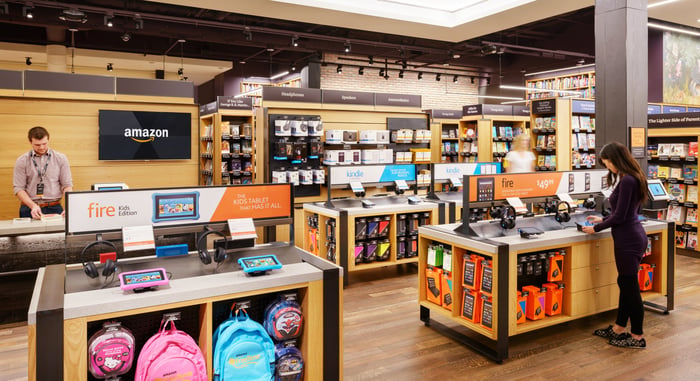 The allure of Roku to consumers is that it's service-agnostic. There are thousands of streaming channels on Roku, including some of the ones powered by tech giants that are not on the devices put out by rival tech titans. Amazon's offering would seem to be just another free service along the lines of Roku Channel, but a potentially problematic wrinkle is that the channel would reportedly be free only to Amazon Prime subscribers and owners of Fire TV media players. It might even roll out exclusively on Fire TV's platform, and this is where a company like Amazon -- willing to sacrifice near-term profitability for the sake of gaining market share -- gets dangerous for Roku.

It's only fitting that Needham's Martin chose to base her rosier outlook, in part, on the reduced competitive risk as the addressable market expands. Hours later we see Amazon -- or more specifically, reports of Amazon's yet-to-be-unveiled IMDB service -- sending Roku shareholders scurrying for the exits in fear that Amazon will swallow the market whole.

It probably won't play out that way. Amazon isn't a threat to Roku, at least not yet. Right now Amazon is a moneymaker for Roku, as it's a major seller of Roku devices and the growing number of smart TVs that come with Roku's operating system built-in. Amazon's educating the market on the digital delivery of content, and encouraging consumers to spend more on services and piecemeal rentals -- things that are all ultimately beneficial to the Roku growth story.

Revenue soared 57% in Roku's latest quarter, and that's actually underselling the 96% surge in platform revenue that's driving growth these days. This explosive segment's surge is the combination of a 48% jump in active users -- Roku's up to 22 million as of the end of June -- and a 48% pop in average revenue per user. A whopping 5.5 billion hours of content was consumed by Roku users in the second quarter, and Roku's getting better at monetizing that traffic.

To IMBD or not to IMDB

It would be wrong to dismiss an IMDB video service rolling out on Amazon's dime. IMDB is a brand that movie and TV buffs know well. It'll probably have decent content out of the gate. The problem is that Amazon can't make it too good or it will eat into the digital and even physical video media that it's currently selling and digitally renting.

Amazon is great, but it's also important to remember that it's practically giving away content to more than 100 million Prime members by including a growing video catalog at no additional cost, and it's still no threat to the top dog in this niche. The IMDB Channel will be just one of the thousands of channels out there, until Amazon starts diverting away original programming budgeting from Prime Video -- and then where will that leave the world's leading online retailer?

Even in the worst-case scenario, in which Amazon's new ad-supported service is a hit, Roku can still win. One of the reasons for Martin boosting her price target on Roku last week is that it's a key takeover target. You can be sure that if Amazon gains more traction in this space, one of the other tech giants with dreams of taking over the living room will be eyeing Roku.

There are legitimate valuation concerns when it comes to Roku. The stock has more than quadrupled since going public at $14 less than 13 months ago, so breathers are to be expected. However, knocking down the stock on fears that Amazon rolling out an ad-supported offering for its own customers is going to hurt Roku misses the big picture. This market's just getting started. There will be plenty of winners.