The platform business is taking off, while Roku is looking beyond.

Streaming TV specialist Roku (ROKU 6.58%) reported second-quarter earnings last night, along with a few other notable announcements, and investors were bingeing on shares following the news. Following the inflection point last quarter, when platform revenue surpassed player revenue for the first time, the company is building on that momentum. Roku is very much becoming less and less about hardware, and more and more about platform expansion.

Platform revenue comprised 58% of sales last quarter, up from 55% in the first quarter. If you zoom out a bit, you can see what a remarkable job Roku has done executing on the platform pivot since the beginning of 2015. 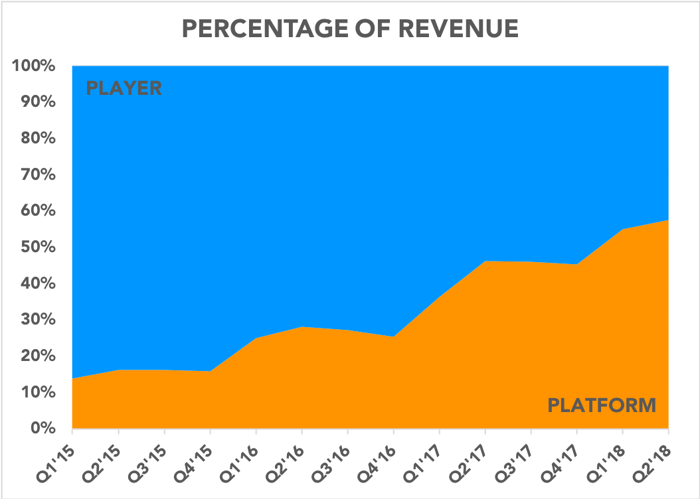 All metrics are heading in the right direction

Total revenue in the quarter jumped 57% to $156.8 million, which includes platform revenue nearly doubling from a year ago to $90.3 million; player revenue represented the other $66.5 million. Since the platform business is vastly more profitable, gross profit soared 107% to $77.8 million. Gross margin expanded by a full 3.4 percentage points on a sequential basis. Here's how gross margin has expanded since the beginning of 2015, which you'll notice correlates with the platform's rising percentage of revenue. 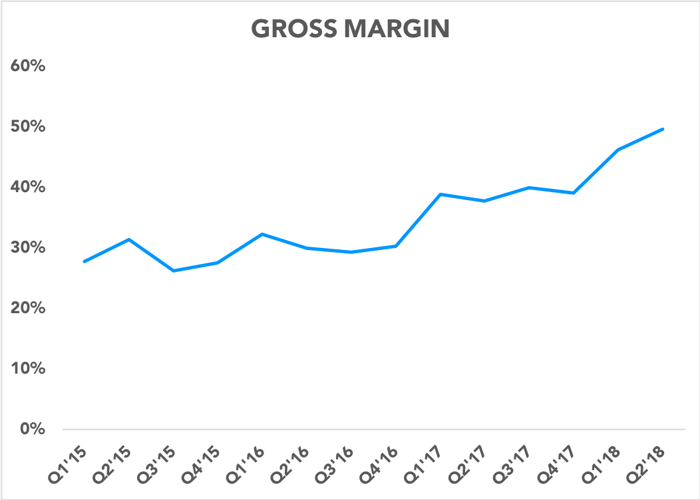 Active accounts grew to 22 million at the end of the second quarter, and Roku streamed 5.5 billion hours. Average revenue per user (ARPU), which is platform revenue divided by active accounts on a trailing-12-month (TTM) basis, rose to $16.60. That really means that the advertising business is taking off, as ads represent the majority of platform revenue.

Operating expenses continue to rise as Roku invests in future growth, and the company incurred an operating loss of $132,000. Still, that's a massive improvement from the $13.4 million operating loss from a year ago. However, other non-operating items were able to bring Roku's bottom line to $526,000 in positive net income, or breakeven per share.

The Roku Channel, coming to an internet browser or mobile device near you

In addition to earnings, Roku also announced that it was bringing The Roku Channel, its first-party over-the-top (OTT) ad-supported streaming service, to the broader web. You no longer need any type of Roku hardware, neither a Roku player or licensed Roku TV, to watch The Roku Channel. That will include PCs as well as mobile devices.

Roku had announced earlier this year that The Roku Channel was coming to Samsung smart TVs, which was its first move beyond Roku hardware, leading to some bullish sentiments from Wall Street. Untethering The Roku Channel from Roku hardware is a move in the same direction, allowing Roku to grow the audience -- and ad inventory. It's almost like Roku wants to become an ad-supported version of Netflix, eschewing the subscriber model but capitalizing on ad budgets continuing to shift away from linear TV toward digital platforms.

On the earnings call, General Manager of Platform Business Scott Rosenberg elaborated on the long-term vision:

We've had huge success with the [Roku] Channel on our Platform. In the time since [launching last September], the Channel is already a top-five reached channel in terms of the number of users or accounts that it reaches in a given month. And it really validates the original thesis behind the Channel, which is that there is this great thirst among OTT consumers for free content. So the announcements that you saw today are really an extension of that thesis and taking that experience off-platform where we can amplify the impact that we have for our content partners, extend reach for our advertisers and ultimately, meet new users who may not yet have a Roku.

It's worth noting that other companies have tried this play (offering older content for free on an ad-supported basis) before with limited success, most notably Sony's Crackle. That service was underwhelming due to its aggressive ad load and uninspiring content library. If Roku can execute better on those fronts to deliver a more compelling ad-supported experience, there could be plenty of upside.

Roku issued solid guidance for the third quarter while boosting its forecast for the year. Revenue in the third quarter is expected to be in the range of $164 million to $172 million, which should translate into gross profit of $71 million to $76 million. The midpoint of that top-line forecast is above the $165 million that analysts were expecting. The company will likely lose $13 million to $18 million.

For the full year, Roku is increasing its outlook and now expects revenue to be in the range of $710 million to $730 million, with gross profit of $315 million to $327 million. Compare that to the full-year outlook issued in May, when Roku expected 2018 revenue to be $685 million to $705 million. Roku still thinks it will post a full-year net loss of $10 million to $22 million, but investors are rather impressed with the company's platform execution, as well as the potential to expand beyond.