Over a year ago, cybersecurity specialists Palo Alto Networks (NYSE:PANW) and FireEye (NASDAQ:FEYE) were trying to turn investor sentiment in their favor. While Palo Alto was facing execution challenges thanks to an outdated sales model, FireEye was struggling thanks to executive turnover and inconsistent financial performance.

Both companies were on track for a turnaround at that time, but they are positioned far differently right now. While Palo Alto has pulled the right strings to boost its growth and capture more customers, FireEye investors might be wondering if it is a good cybersecurity play anymore. 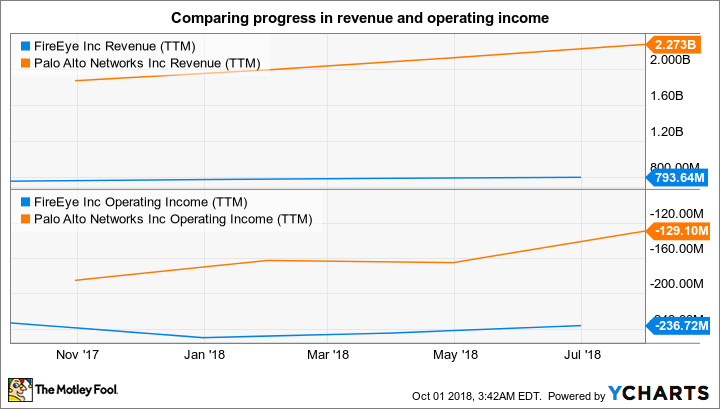 The above chart makes it clear why Palo Alto investors have been in high spirits as compared with FireEye's. In fact, choosing from these two pure-play cybersecurity companies is really easy from an investing standpoint, as a closer look at their key performance metrics will reveal a clear winner. 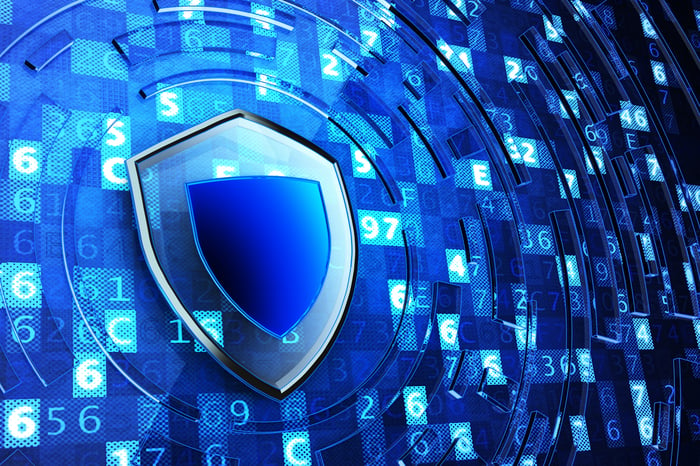 Palo Alto's strategy of expanding into fast-growing niches of the cybersecurity market is paying off handsomely, as evident from the company's massive customer growth. The company's customer count shot up 27% year over year last quarter to 54,000, while annual revenue growth was slightly better at 29%.

This means that Palo Alto is not only adding new customers, but it is  getting them to spend more money. In fact, the lifetime value of Palo Alto's top 25 customers jumped 45% year over year last quarter.

Lifetime value represents the revenue received by the company from a particular customer after accounting for costs related to client acquisition and servicing. So the increase in the lifetime value means that Palo Alto's existing customers have ramped up their spending. This is a nice way of profitably boosting the business, since it costs less to sell new products to an existing customer as compared with going out and acquiring a new client.

This is one of the reasons Palo Alto's spending on selling and marketing dropped to 48% of revenue last quarter as compared with 52% in the prior-year period. This lower outlay helped Palo Alto reduce its GAAP net loss by 31% in the latest fiscal year. More importantly, Palo Alto investors can expect the company to further reduce its expense profile, as it is currently getting 62% of its revenue by selling subscription services and Palo Alto's subscription business carries a 73% gross margin rate, which is 4 percentage points higher than the product-related business. The good part is that Palo Alto's subscription sales are growing at an impressive pace. The company clocked 33% annual growth in subscription revenue in fiscal 2018.

Palo Alto looks set to sustain the impressive growth rate of the subscription business, which should lead to a better margin profile and push the company toward profitability.

While Palo Alto has been enjoying tremendous growth, FireEye is finding it difficult to switch into a higher gear. We have already seen in the chart above that the company's top line has remained almost flat over the past year, and it hasn't made any notable progress on cutting down its losses, either.

The company's latest quarterly report, however, did offer some positive signals. Its customer additions were up 24% year over year, while the number of $1 million-plus transactions increased to 37 in the second quarter from 27 in the prior-year period. But the problem with FireEye is that the rate of its customer additions has been patchy at best, and fades in comparison to Palo Alto's impressive growth.

Not surprisingly, FireEye's deferred revenue growth has been trending lower. This is a red flag for investors, as deferred revenue is the money already received from customers for services that will be delivered in the future. Now, FireEye's customer base and deal size shot up impressively last quarter, but still, its deferred revenue was almost flat on a year-over-year basis at $880 million. Of this, 60% was short term in nature, so it will be recognized on the income statement in the next 12 months.

So customers are now signing shorter contracts with the company, and this is hindering FireEye's long-term growth prospects.

Palo Alto Networks is the clear winner in this showdown of cybersecurity specialists. The company's rapidly growing customer base is not only boosting its top line, but also pushing it toward becoming profitable thanks to improving margins. FireEye, on the other hand, seems to be going nowhere. 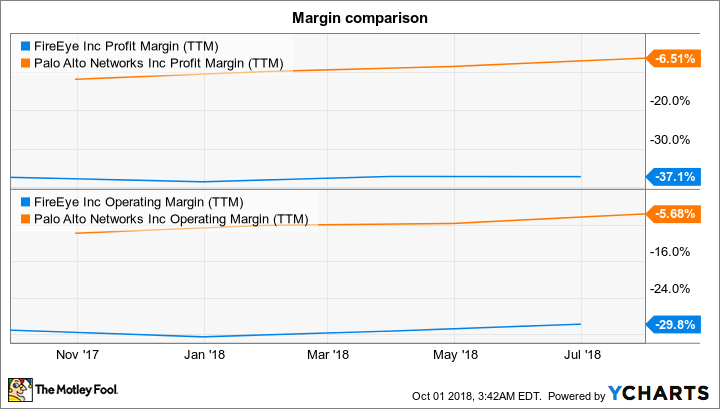 Additionally, Palo Alto is the better placed of the two companies to expand its business thanks to a stronger balance sheet. The company has a net cash position of nearly $1.4 billion, which is far ahead of FireEye's $141 million. This gives investors a clear picture that Palo Alto is the way to go to take advantage of the fast-growing cybersecurity industry.