Snap Inc. (NYSE:SNAP) stock fell 22.2% in September, according to data provided by S&P Global Market Intelligence. Shares took a hit following congressional hearings with Facebook (NASDAQ:FB) and Twitter (NYSE:TWTR) executives that raised concerns about the possibility of increased regulation, kicking off a trend of sell-offs that continued as the month progressed. 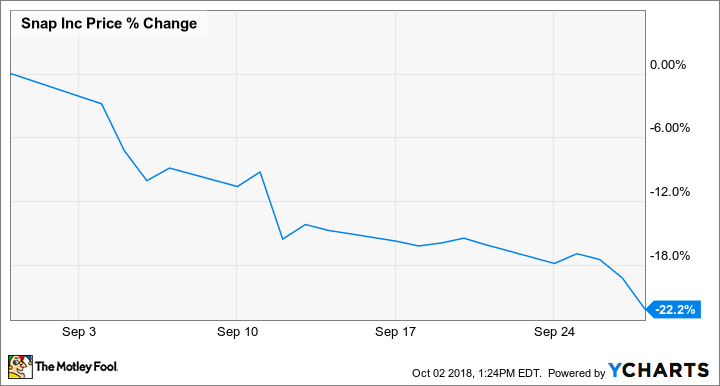 Facebook Chief Operating Officer Sheryl Sandberg and Twitter Chief Executive Officer Jack Dorsey appeared before the Senate on Sept. 5 to address concerns about transparency and social media platforms being used by foreign governments to exert political influence. Dorsey also had a hearing with the House later that day to discuss what his company is doing to limit disinformation campaigns and allegations that moderation and post visibility on Twitter is biased against users on the right side of the political spectrum. The content and tenor of the hearings raised investor concerns that regulation is on the horizon, and it triggered sell-offs for leading social media companies, including Snap. 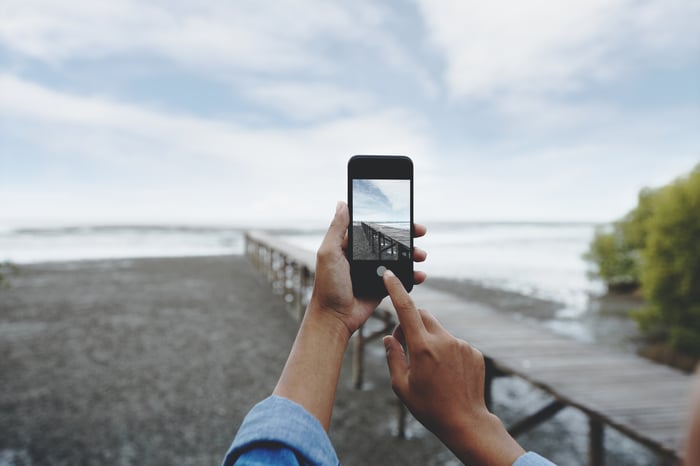 The market takeaway form the hearings for Facebook and Twitter execs appears to have been that legislators could soon take actions that materially impact the social-media industry. Twitter shares fell 19.1% in the month, while Facebook dipped 6.4%. Alphabet CEO Larry Page and the CEO of the company's Google Division, Sundar Pichai, were also invited to the hearing but declined to attend. Alphabet instead offered to present a written testimony along with the company's chief legal officer, but this was rejected by the Senate; the search giant's stock closed out September down 2%. Neither the Senate nor House committees requested interviews with Snap management. However, the company would almost certainly be subject to laws drafted to exert more control on the social media space, so it's not surprising that the already-volatile stock saw substantial fallout from the hearings.

Senator Mark Warner said he was skeptical that social media platforms would be able to address the challenges at hand without governmental intervention. Facebook's Sandberg made comments that seemed to acknowledge the likelihood of regulation but expressed concern about whether these regulations would have the right approach and effect.

Concerns about the potential impact of increased governmental involvement have raised additional uncertainty about Snap's outlook, and the stock now trades down roughly 70% from market-close price on its public trading debut in March 2017. The company is still feeling pressure from its poorly received Snapchat redesign earlier in the year, lackluster sales for its Spectacles camera glasses, and concerns that it won't be able to expand and monetize its user base without ballooning operating expenses. New laws governing the social internet present another potential obstacle to the company's growth.

Snap's share price has continued to trend downward in October, with a round of negative analyst coverage prompting shares to dip 11.8% through the month as of this writing and trade in the $7.50 range. 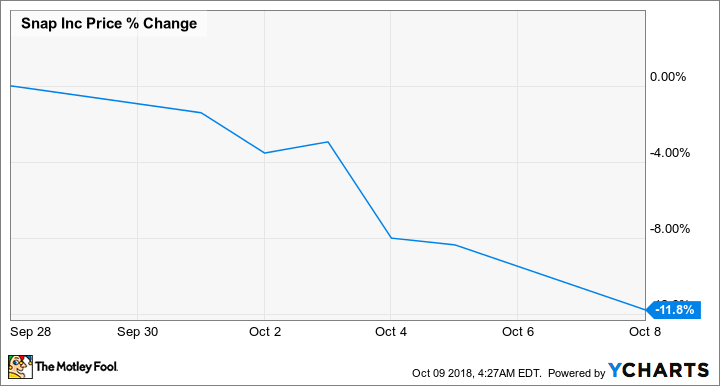 Citigroup analyst Mark May published a research note on Oct. 3, lowering his price target on the stock from $8 to $7 due to discouraging engagement trends. Anthony DiClmenete of Evercore ISI also lowered his target on the stock from $9 to $7 the next day, citing competitive pressure from Facebook's Instagram platform and expectations that Snapchat will report declines for its active-user base when the company publishes results for its September quarter.

Shareholders received a more encouraging take on Snap's outlook in the form of an internal memo that was published on Cheddar on Oct. 4, but the optimistic bent and targets of CEO Even Spiegel's letter to employees have not translated to improved stock performance. The memo indicates that the company is on track to have the business at break-even for the fourth quarter, and it also states that management expects to post full-year profits in 2019.

Snap is looking to add more gaming features and content and generate more interest in its Spectacles hardware after sales for its first two generations of augmented-reality camera glasses proved underwhelming. The company has been eager to build a successful hardware business as it faces increased competition from Facebook's Instagram, which has replicated many of Snapchat's key features, and a less-than-promising outlook on that front helps contextualize its poor stock performance over the last year.

The social media and camera company will report third-quarter earnings results after market close on Nov. 6, and it expects sales to come in between $265 million and $290 million, a 33% year-over-year increase at the midpoint.