Instructure (NYSE:INST) stock dropped 13.6% in September, according to data from S&P Global Market Intelligence. For context, the S&P 500 edged up 0.6% last month.

The learning technology company's stock has continued its downward movement this month, with shares declining 13.1% through Oct. 9. The broader market struggled during this period, with the S&P 500 falling 1.1% and the tech-heavy Nasdaq dropping 3.8%. 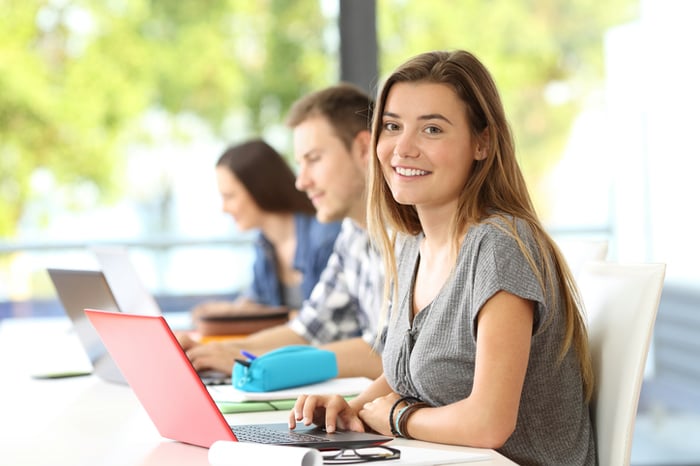 Instructure didn't release any notable financial or business data during September, nor were there any significant news reports about it. So it's probably safe to assume that the stock's subpar performance was simply a continuation of the downward trend it's been charting since the company released its second-quarter results on July 30. Both top and bottom line results slightly beat Wall Street's estimates, along with the company's guidance. However, the market punished the stock because the company's third-quarter outlook was lighter than the Street was expecting. Shares lost 11.2% on July 31 and are in the red 29.4% since then.

Following the earnings release, Wall Street firm Oppenheimer lowered its rating on the stock to "perform," from "outperform," which also likely weighed on the stock price. In plain English, those ratings can be thought of as "hold" and "buy," respectively.

In Q2, Instructure's revenue grew 30% year over year to $50.1 million, driven by new customer wins for its cloud-based, software-as-a-service (SaaS) platforms for the education and corporate markets. Its net loss expanded 21% to $10.5 million, which translated to net loss on a per-share basis expanding 3% to $0.36. On an adjusted basis, the company turned in a loss of $0.24 per share, slightly wider than the $0.23 loss it posted in the year-ago period. Wall Street was looking for an adjusted loss of $0.26 per share on revenue of $49.5 million.

Investors will soon be getting some material news about the Salt Lake City-based company that IPO'd in November 2015. Instructure just announced that it will release its third-quarter results after the market close on Monday, Oct. 29.

For Q3, management expects revenue of $53.6 million to $54.2 million, which, at the midpoint, would represent growth of 26% year over year. On an adjusted basis, the company expects to post a loss of $0.25 to $0.23 per share, the entire range of which is somewhat better than its loss of $0.27 per share in the year-ago period. (Going into Q2 earnings, Wall Street had been forecasting a Q3 adjusted loss per share of $0.22 on revenue of $54.5 million.)

While Instructure's Q3 guidance was weaker than expected, management did slightly raise its outlook for the full year as follows: