Shares in drainage and water pipe company Forterra (NASDAQ:FRTA) fell 11.8% in September, according to data provided by S&P Global Market Intelligence. In reality, there was no major news from the company and the decline looks like an extension of a trend that set in after a lackluster set of earnings in August -- the stock is down more than 25% in the period since.

It's not that Forterra isn't seeing good underlying demand for its products -- drainage pipe and water pipe underlying sales were both up 7% in the second quarter. Rather, that margin in the water segment took a hit due to what CEO Jeff Bradley described as "continued higher average scrap costs on both a sequential quarter and year over year basis that have not yet been offset by higher average selling prices." 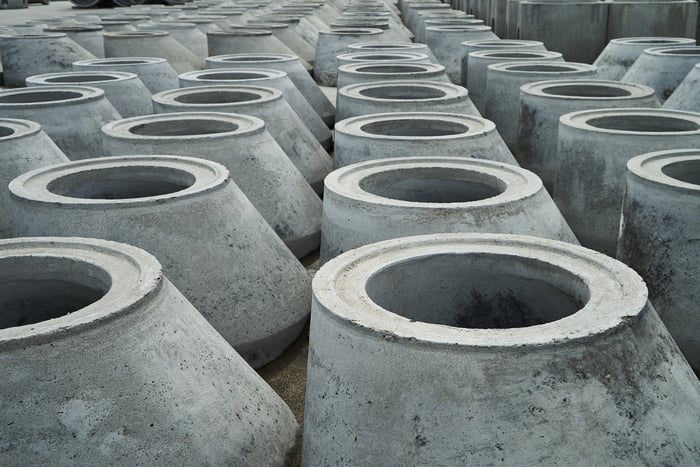 You can see the impact in the following table. For reference, both segments have divested assets in the past year so reported sales are lower than sales from ongoing operations -- often referred to as organic sales.

The issue of lower-than-expected margin in the water segment overshadowed a set of earnings otherwise characterized by good results in drainage and lower corporate costs overall. As you can see below, total company EBITDA margin actually improved notably.

Management's outlook for the third quarter is more or less for a continuation of the trends seen in the second quarter. The company's guidance calls for lower expected EBITDA, EBITDA margin, adjusted EBITDA, and adjusted EBITDA margin in water due to a combination of higher scrap metal costs, as well as higher labor and freight costs.

In a nutshell, even though Forterra is raising prices, it's not enough to offset the cost pressures in the water segment as of yet.

Forterra is an interesting position, which isn't so far removed from other industrial companies. From multi-industry companies like Illinois Tool Works and 3M and construction equipment company Caterpillar, the issue of rising costs has challenged previous expectations for earnings and margin growth.

However, Forterra is raising prices and underlying demand remains strong. Moreover, history suggests commodity cost rises will moderate going forward. If so, then Forterra could see some substantial margin expansion in the future.