Please ensure Javascript is enabled for purposes of website accessibility
Log In Help Join The Motley Fool
Free Article Join Over 1 Million Premium Members And Get More In-Depth Stock Guidance and Research
By Rich Duprey - Oct 12, 2018 at 6:19AM

Matt Levatich's remarks on the value of its motorcycles being American-made are being misconstrued.

Few companies are viewed as more quintessentially American than Harley-Davidson (HOG 3.50%). Even with the brouhaha over the motorcycle giant opening factories in other countries to sidestep trade tariffs, the bikes built for the U.S. market are made here in the U.S.A. And despite the dramatic slowdown in sales that the company is experiencing, Harley enthusiasts are proud of that domestic heritage.

Which is why CEO Matt Levatich just made his job a whole lot harder and a rebound in sales more difficult by diminishing the importance of the "made in the U.S." label in selling the brand. In comments to a Milwaukee-area entrepreneur group, Levatich said concepts like freedom, strength, and independence were core values of Harley-Davidson because they were "liberating," while being "made in the U.S." was a "constraint to growth." 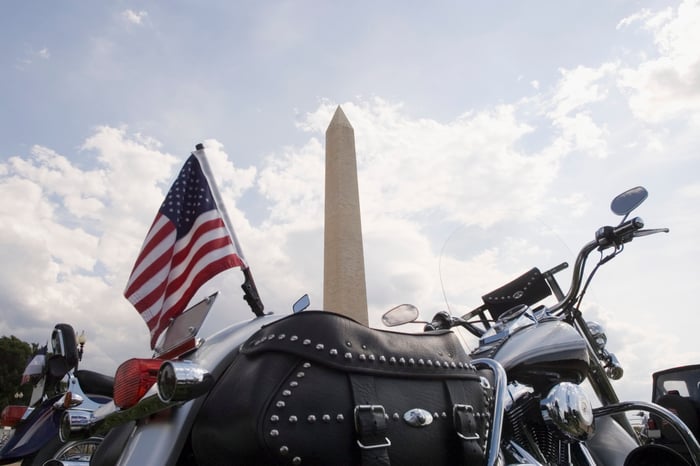 Pursuing China and other foreign markets

Levatich is right in the larger context: Limiting a company's identity to a single jingoistic phrase is an impediment to reaching customers in other markets. But that more-nuanced take is being lost among the many motorcycle owners whom Harley-Davidson would consider its core customers. They might not be buying motorcycles at anywhere near the rate they once were, but Levatich won't do well if he only is concerned with how customers overseas view the company, at the expense of the customers who helped make it what it is today.

While it's not fair to say Levatich doesn't care about his core U.S. customers, it is true that Harley-Davidson is much more focused today on bike buyers in foreign markets because that is where it sees its future growth coming from.

U.S. sales fell over 6% in the second quarter and are down nearly 9% year to date, putting it on track to have lower sales for the fifth consecutive year. In comparison, Europe and Latin America are still seeing robust growth, although the markets are but a fraction of the size of the U.S.

In the road map for the future that Harley laid out this summer, much of the focus was on how it is going to reposition itself for the global opportunities it wants to take advantage of -- particularly in China, where the small-engine bikes it wants to build are very popular.

Because Harley-Davidson is taking a more expansive worldview, simply touting that its bikes are American-made won't take it very far. Yet because nearly 60% of its sales still come from the U.S., disparaging talk about an ideal that many of its customers care about won't encourage them to buy more of its bikes, especially now that they can turn to rival Polaris Industries' Indian motorcycles as viable U.S.-made alternatives. Levatich can't hope to make international markets 50% of its sales volume simply by lowering the number of bikes it sells here at home. Well, he could, but it's not a strategy he should pursue.

A bumpy road will get bumpier

Of course, that's not what Levatich is trying to do. His point that freedom and self-expression are core values of Harley are also very much at the heart of American ideals. But it didn't come across that way, and as my mother used to admonish me, "It's not what you say, but how you say it."

And what Levatich said really didn't go over well with many in the bikemaker's fan base, who interpreted his remarks to mean he believes being made in America isn't important to the company anymore.

Levatich already has a difficult job before him, and there are those who would like to see him replaced with someone they view as a more effective leader. Rumblings from Harley-Davidson's extensive dealer network indicate that it is already chafing at his leadership. The direction he's taking the company -- and anything that makes it harder for the dealers to sell motorcycles -- isn't going to go over well. By having his comments misconstrued, it is going to make Levatich's already onerous task of reviving Harley-Davidson even more so.