The U.S. is nearly in the throes of the holiday shopping season, which means consumers will soon be opening their wallets up more than usual at stores and restaurants. This might have some investors thinking about how well their retail stocks will perform over the next few months or whether they should pick up some new ones.

But long-term investors know that one good (or bad) shopping season isn't reason enough to buy or sell a stock. Instead, investors should be looking for companies that are gaining advantages over their competitors that will help them outpace rivals for years to come.

To help investors find retail companies that meet that description, we reached out to three Motley Fool contributors for their retail stock recommendations, and they came back with Texas Roadhouse (NASDAQ:TXRH), Amazon.com (NASDAQ:AMZN), and Walmart (NYSE:WMT). Here's why. 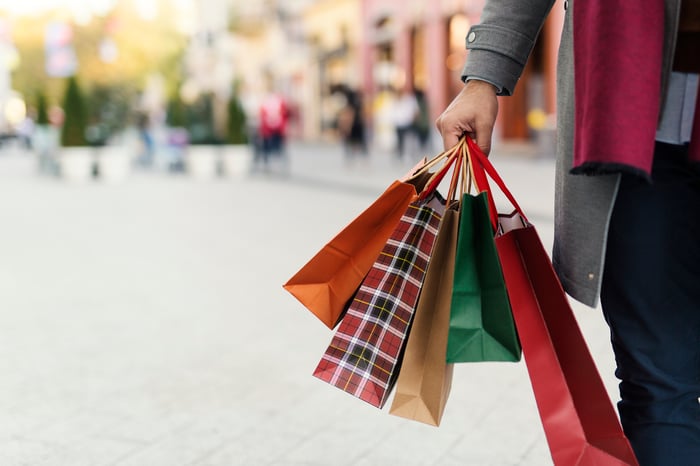 Nicholas Rossolillo (Texas Roadhouse): Lone Star State–themed steakhouse chain Texas Roadhouse has been a steady performer for years. While the restaurant recession has taken its toll on many brands over the last few years, Roadhouse has barely skipped a beat. Over the last five-year stretch, revenue is up 73%, and free cash flow (money left over after basic operations and capital expenditures are paid for) is up 176%. That has equated to a steady stock price increase of 158% and a dividend that currently yields 1.5%.

Consumer spending has surged in 2018, which has given the restaurant industry a little reprieve and made Texas Roadhouse's results even better. Year to date, comparable restaurant sales at established locations are up 5.3% at company-owned stores and up 4% at franchised ones. Earnings per share have risen 36.5% as a result of more foot traffic and a lower tax rate.

It isn't perfectly smooth sailing, though. Food prices are going up, as are wages and other labor-related costs. That might partially explain the new addition to the board of directors, an executive from the healthcare insurance industry. At the end of the second-quarter 2018 report, total restaurant count was 566, so the pace of new openings has been slowly declining and is now at just a 5% annual rate. That might make it seem like this is the wrong time to be buying this stock.

So why buy Texas Roadhouse shares now? For one, the stock has pulled back 10% from its all-time high a month ago, likely because of the near-30% return already provided this year. Barring a big setback during the last few months since the second-quarter report, management said all the pieces are in place for another positive round of business results during the third quarter.

Even though new stores won't be the tailwind they were in times past, the chain is likely to perform well, as it has focused on underserved suburban and rural America when choosing locations. Its big portions at a value are also likely to resonate with diners, even if consumer spending takes a breather at some point. Plus, as Roadhouse eases off its expansion efforts, profits are likely to edge higher in the coming years, since the company funds its new openings out of its own cash generation. Thus, now looks like a decent time to give this best-in-class restaurant operator another look.

One of the world's largest retailers is on sale

Danny Vena (Amazon): While most investors will think of Amazon as a tech stock -- and rightfully so -- it also happens to be one of the world's largest retailers. According to Deloitte's 2018 Global Powers of Retailing report, Amazon has vaulted to 6th place, with more than $94 billion in worldwide retail revenue, up from the 10th spot just the year before. The most recent results were culled from fiscal-year sales ended in mid-2016 (the most recent available), so the company has likely climbed farther up the list in recent months.

Amazon isn't slowing down and will continue to grow from here. In 2017, Amazon grew revenue 30.8% year over year, but in the first six months of 2018, that growth has accelerated, up 41% compared to the prior-year period. Lately the company has been expanding margins in its e-commerce operation, which is helping drop more to the bottom line.

It's important to remember that Amazon is selling much more than the products that move off its digital shelves. The company announced earlier this year that it had topped 100 million Prime subscribers. Customers currently pay $119 per year and in return get free two-day or faster shipping on a host of products and access to the company's video and music streaming services at no additional cost. The money made from those memberships isn't going to move the needle, but the free shipping serves as a powerful incentive for shoppers to get their money's worth.

Amazon is also selling advertising on its site, a high-margin business recently worth $10 billion per year, and this is one of the company's fastest-growing segments. Its cloud-computing cash cow, Amazon Web Services, saw revenue grow 48% year over year so far in 2018, and sales could triple in five years.

The recent market meltdown has left Amazon's shares selling at a 12% discount to recent highs, so now's the time to buy this high-flying retailer.

Don't count this retail giant out

Chris Neiger (Walmart): Of course, it's nearly impossible to keep Walmart off of this list of top retail stocks. The company is the largest retailer and one of the biggest companies in the world, after all. But beneath this megaretailer's size lie a lot of new innovations and solid sales performance that make the company a compelling buy.

Take, for example, Walmart's massive investments in its own e-commerce platform over the past few years and its purchase of Jet.com, which have helped the company drive its e-commerce sales up 40% year over year in the most recent quarter. One quarter with that kind of growth is excellent, but Walmart's management believes that the company's e-commerce sales will hit 40% growth for the full year as well. That optimism is likely driven by the company buying a recent controlling stake in Flipkart and its growing partnership with JD.com in China.

Part of the company's e-commerce secret sauce can also be attributed to Walmart's popular online grocery sales. The retailer has more than 2,000 grocery-pickup locations right now, where customers can quickly drive up and grab the groceries they've ordered, and Walmart says by the end of the year, its pickup locations will reach 69% of all U.S. households. Why should that matter (besides to parents with young kids who hate grocery shopping)? Because the retail giant is fighting rival Amazon in the online grocery market. Amazon took 12.5% of the market last year, while Walmart followed closely with 11.1%

Aside from groceries and e-commerce, Walmart's stores have performed well lately too. Comparable-store sales were up 4.5% in the most recent quarter, ticket size jumped 2.3%, and the company's U.S. sales growth was the best it's had in a decade. Additionally, the company's customer traffic saw the biggest gains in more than six years.

If all this weren't enough, investors should also consider that Walmart's dividend yield is currently 2.2%, and the company has raised said dividend for 45 consecutive years. This retail behemoth might have gotten off to a slow start in the e-commerce market, but its recent moves mean that this giant now has a massive amount of momentum that shouldn't be overlooked.