Since it began its second turn as a public company, PayPal (NASDAQ:PYPL) has had a remarkable run, nearly tripling the gains of the S&P 500. Over the past couple of months, however, the stock appears to have lost much of its momentum, tumbling more than 17% since reaching an all-time high in early September. Most of this weakness is related to the recent market malaise, compounded by fears of competition and the potential for former parent company eBay to start processing its own payments, a move it announced earlier this year.

Investors will be looking for insight into what lies ahead for PayPal when the company reports the results of its third quarter after the market close on Thursday, Oct. 18. Let's take a look at the latest results and see what we can expect this week. 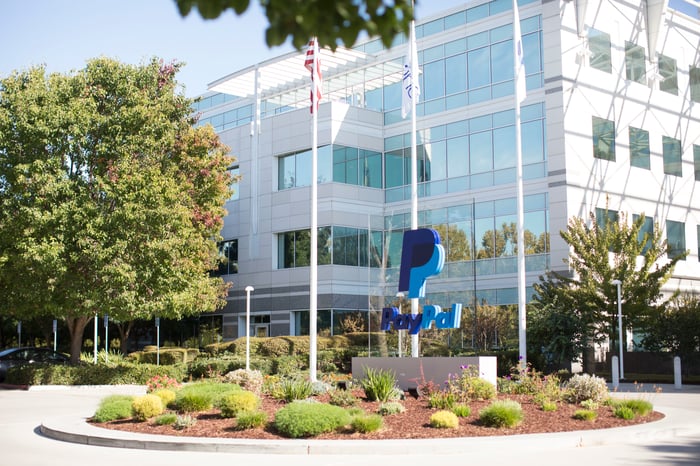 Growth as far as the eye can see

For the second quarter, PayPal reported revenue of $3.86 billion, up 23% year over year and topping the high end of its guidance as well as analysts' consensus estimates. Profits were similarly robust, with net income of $526 million producing adjusted earnings per share of $0.58, also ahead of its forecast and analysts' expectations.

Other metrics shined as well. PayPal's net new active customers jumped by 7.7 million, up 18% compared to the prior-year quarter, bringing its total active customer base to 224 million. Customer engagement increased, as existing customers were using the service with 36 payment transactions per account over the prior 12 months, up 9% year over year. The biggest contributor to its success is the massive payment growth, as PayPal processed 2.3 billion transactions, up 28% year over year.

PayPal isn't resting on its laurels, instead expanding its opportunities in a number of ways. Last month, the company closed on its $2.2 billion acquisition of iZettle, a small business tools and payments service that operates primarily in a number of markets in Europe and Latin America.

PayPal has also made several smaller acquisitions over the past several months in a bid to expand its market. These include predictive artificial intelligence company Jetlore, which delivers personalized e-commerce experiences, Hyperwallet, which distributes payments to online buyers and sellers, and risk-management platform Simility, which helps businesses with fraud prevention. Each of these snap-on additions expands PayPal's growing ecosystem of tools for businesses and should bode well for future results.

What this quarter could hold

PayPal's enthusiasm about its results so far in 2018 led to an increase of its guidance for the year -- for the second time in as many quarters. The company now expects revenue in a range of $15.3 billion to $15.5 billion, which would represent year-over-year growth of 12.5% at the midpoint of its guidance. It is also guiding for adjusted earnings per share of about $0.54, or 17% compared to the prior year.

The company doesn't provide quarterly guidance, and while we shouldn't rely too much on Wall Street's quarterly whims, it can provide a benchmark. Analysts' consensus estimates for the quarter are projecting revenue of $3.67 billion, an increase of 13% year over year, and earnings per share of $0.54, an increase of 17% compared to the prior-year quarter.

I think the recent slump is overdone, and there's no reason to believe that PayPal's growth won't continue when it reports on Oct. 18.

Will PayPal Continue Its Winning Streak When It Reports Earnings This Week? @themotleyfool #stocks $PYPL Next Article
Current