This time, the disruption is in homes, not phones.

When Steve Jobs released the first edition of the iPhone in June 2007, he promised that Apple (AAPL 1.62%) would "reinvent the phone" by putting three devices into one (an iPod, a mobile phone, and an "internet communication device"). His audacious prophecy couldn't have been truer given where Apple stands today, thanks to the success of the iPhone.

E-commerce giant Amazon (AMZN 3.15%) is now doing something similar, and it won't be surprising if it manages to emulate Apple's success. Let's take a look first at what's worked so well for Apple over the years. 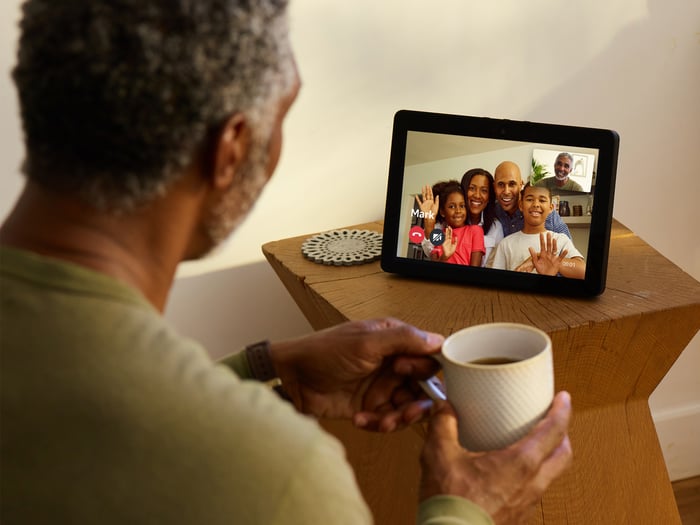 Why Apple has dominated the smartphone business

The massive popularity of Apple's iPhones year after year helped it become the world's first trillion-dollar company in August 2018, just over a decade after the first-generation iPhone was announced. This isn't surprising -- the iPhone not only changed the way smartphones were perceived, but also put Apple firmly in the driver's seat to take advantage of the smartphone boom.

Back in 2007, annual smartphone sales stood at 122 million units. Sales exceeded 1.5 billion units last year. In the year leading up to the release of the first iPhone, Apple's revenue stood at $21 billion, a figure that has risen to a massive $255 billion over the trailing-12-month period.

The iPhone has been the key to this growth, and supplied 56% of the company's revenue in the third quarter. What's more, the company cornered 86% of the smartphone industry's profits in the final quarter of calendar 2017 despite competition from more than 600 Android smartphone manufacturers.

So Apple has not only managed to reinvent the smartphone, it has ensured that the iPhone is successful year after year by adding new features and building up hype with a solid marketing strategy and flashy product launches. It has created a robust ecosystem around the iPhone with new products and services such as smartwatches, earphones, music, payments, and many more.

So just one device brought about a sea change in Apple's fortunes over the years. The company's smart strategy of locking customers into the iOS environment, which came into being with the first iPhone, and launching ancillary services around the same has helped it strike gold in the consumer electronics space.

Amazon is now doing a similar thing by disrupting another emerging industry.

Amazon is reinventing the smart home

Amazon is on track to attack this opportunity by creating an ecosystem of smart-home products based on the Alexa virtual assistant and the Echo smart-speaker devices. Amazon saw the opportunity early on and launched these platforms at the end of 2014.

Since then, Amazon has dominated the virtual assistant and smart-speaker markets thanks to its early mover advantage. The Alexa platform held 62% of the global intelligent assistant market share at the end of last year, with Alphabet's Google Assistant being its only notable competitor. Similarly, the Echo devices helped Amazon corner 41% of the global smart-speaker market at the end of the second quarter of 2018.

Smart speakers are central to the automation of a home: They allow users to control thermostats, lighting, window shades, and other appliances.

Of course, Amazon's market share has eroded over time thanks to the emergence of rival products. But just like Apple, Amazon is adding new products and services to bolster it smart-home ecosystem, which should ensure that it continues to make money from this fast-growing opportunity.

For instance, Amazon recently launched a range of new products to dive deeper into smart homes, including a $60 microwave. This appliance is set to go on sale in November, and it looks like consumers have already signaled their approval -- it is the best-selling countertop microwave on the e-commerce platform.

That's not surprising, as the attractive price point makes the Amazon Basics microwave basically an impulse buy, especially considering that you can use voice commands to make it cook, reheat, and even order supplies such as popcorn. It won't be surprising if Amazon rolls out more intelligent appliances, such as refrigerators that order groceries used on a regular basis, to lure more consumers into its smart-home ecosystem.

But it isn't just the big appliances that Amazon is going after. The company's $25 smart plug aims to smarten up the "dumb" devices in a home. For instance, you can plug your normal lamp into an Amazon Smart Plug and control it through voice commands. Some might say that there are a ton of smart-plug manufacturers out there, but what sets Amazon apart from the rest is that its plug eliminates the complicated setup process, should play well with the Echo devices, and provides an affordable route of making your home smarter.

The smart-home industry is Amazon's next growth frontier. That's why the company is going all out to build a solid ecosystem of devices and services in a bid to lock consumers into its ecosystem, similar to what Apple was doing with the iPhone over a decade ago. It won't be surprising to see Amazon making big bucks from smart homes for years to come, as it is going all out to dominate this space.