This has not been a very good year for so-called sin stocks, or companies that populate industries like alcohol, tobacco, and firearms. They operate businesses that some people consider immoral or unethical, and despite their ability to generate substantial profits, some investors go out of their way to ensure they do not own them.

Yet one person's trash is another person's treasure, and oftentimes picking up shares in businesses that others cast aside can be good for your portfolio -- if you buy them at the right time. With so many sin stocks trading deep in the red in 2018, this could be a great time to buy in. 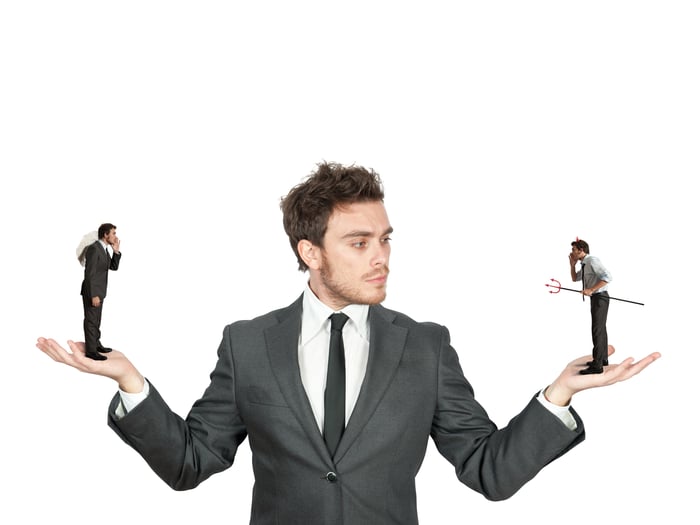 Having a devil of a time

Take a look at how some of these sin stocks are performing this year.

It's important to realize that not every stock in a particular sinful industry is going to follow the trend down. While mass beer brewers are off by more than 24%, craft beer king Boston Beer (NYSE:SAM) is up 42% this year, and gunmakers American Outdoor Brands (NASDAQ:SWBI) and Sturm, Ruger (NYSE:RGR) are trading 11% and 15% higher, respectively, though the latter was in negative territory this year.

What makes sin stocks attractive is that they tend to be predictable, profitable stalwarts that often show resilience during a recession. People will largely continue to drink and smoke cigarettes regardless of whether the economy is in the tank, despite the fact that consumption of both has been declining for years (and in the case of tobacco, decades).

Sin stocks also tend to pay dividends that offer healthy yields. The dividends of Altria and Anheuser-Busch yield over 5% while CoreCivic's payout is north of 7%. Ruger, which has a dividend based on a constant percentage of net profits, currently yields 2.2%.

So is now a good time to buy a basket of sin stocks, or just the top industry leaders? You can also invest in exchange-traded funds (ETFs) like AdvisorShares Vice (NYSEMKT:ACT) and USA Mutuals Vice Fund (NASDAQMUTFUND:VICEX).

There are some reasons why the different sin stocks are performing the way they are, so let's briefly take a birds eye view of the industries to get a sense of how an investor should proceed.

Mass brewers like Anheuser-Busch and Molson Coors have been trending lower because beer consumption has been on the downswing in the U.S. for several years and shows no sign of reversing anytime soon. While craft beer remains a growth segment, Boston Beer is winning not because of its flagship Samuel Adams beer, but rather its hard cider, teas, and seltzers. Because they still make up a relative small portion of Boston Beer's total revenues, investors should be leery about the heights the stock has attained. Constellation Brands (NYSE:STZ), on the other hand, has one of the most popular brands in the Corona family of beer, but its stock is down 3% this year.

World-class casino operators Las Vegas Sands, MGM Resorts, and Wynn Resorts have been plagued with slowing growth in both Las Vegas and Macau, the biggest gambling center in the world and the only place in China where it's legal to gamble. Wynn is facing additional headwinds because of the sexual misconduct allegations against founder and former CEO Steve Wynn, which may affect its licensure in Boston and elsewhere. MGM will be the first casino to have its license in Macau come up for renewal in 2020, and it's facing pressure from an activist investor to sell its Chinese operations.

While private prison operators CoreCivic and GEO Group never really seemed to live up to the potential President Donald Trump's administration seemed to promise, financial results for both have improved after his enhanced immigration policies went into effect. Both companies operate detention centers and are building out new facilities to expand capacity, which should find a need as the Bureau of Prisons and Immigration & Customs both seek out more beds.

Smith & Wesson owner American Outdoor Brands had been trading at double-digit losses for much of the year until an earnings surprise in late August sent its stock soaring. Gun buying activity seems to be picking up again, and the results of the coming midterm elections could be a spur to buy more. Nevertheless, it's doubtful the industry will return to the crazed buying levels it was at in 2016. While the long-term trend is still toward rising gun ownership, the big bounce the stock received may be a high point for the time being.

Should you own sin stocks?

Sin stocks aren't everyone's cup of tea, but their historical returns have outpaced the market averages, which makes them worth considering. Still, ETFs may represent the easiest path as they give investors broad exposure and diversification across the full spectrum of sin stocks in the market.