Despite all the capital deployed to build and maintain casino resorts, there aren't many resort operator stocks listed on our markets. So it's rare when a casino IPO comes around.

This week we'll see one of those rarities when the American Depositary Shares (ADSes) of such a company, Studio City International Holdings, make their debut on the New York Stock Exchange following an IPO. Let's roll up to the entrance and stroll inside the big resort to see what this company's about. 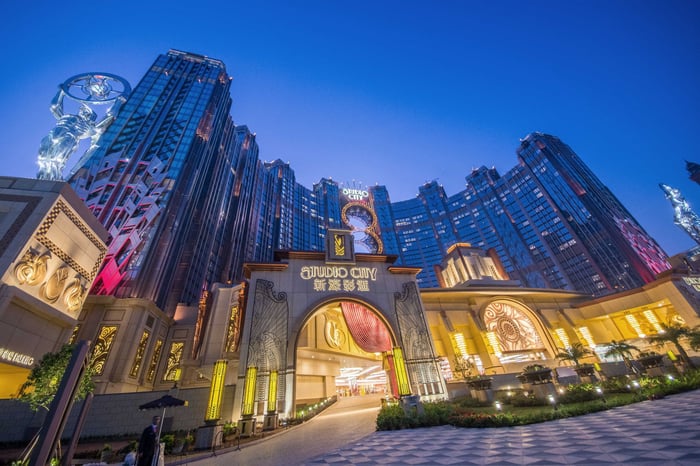 The company is majority owned by MCE Cotai, a subsidiary of publicly traded gaming company Melco Resorts & Entertainment (NASDAQ:MLCO), one of six licensed Macau casino operators. In the minority spot is New Cotai, a consortium led by a pair of U.S. investment management companies.

Besides its casino, Studio City -- situated in the Cotai district of the enclave -- houses roughly 377,000 square feet of retail space. It has numerous food and beverage outlets, and a raft of entertainment options, including a figure-8 Ferris wheel, a 5,000 seat arena, a family entertainment center, and a 4-D Batman flight simulator.

Studio City opened in late 2015. Not surprisingly, its revenue has risen precipitously since Year One, although growth has slowed significantly. The company is not yet profitable, and its debt load -- monster resorts are expensive to build and maintain -- is heavy:

Following the IPO, the current shareholders aim to remain in control of Studio City International. MCE Cotai is slated to hold over 57% of the shares. New Cotai is to own slightly more than 38% of the outstanding stock, with smaller shareholders owning the remainder.

This IPO isn't exactly well-timed. Macau's all-important gaming revenue saw sluggish growth in September, rising by only 2.8% on a year-over-year basis. This was well short of analyst expectations, even when accounting for the effects of that month's Typhoon Mangkhut. It also represented the lowest growth figure in over two years. And as gaming revenue goes in Macau, so goes auxiliary revenue.

And there might be even gloomier times ahead. There are concerns about potentially slowing Chinese economic growth, which America's escalating trade war might exacerbate. Meanwhile, unlike in years past there isn't a clutch of new resort projects coming onstream in Macau; that lack of novelty might affect visitor numbers (after all, The Next Big Thing can be a powerful inducement to tourism).

Although Studio City International doesn't operate its in-house casino, the company will probably nevertheless be lumped in with -- and compare less favorably to -- big Macau players. These include U.S.-based Las Vegas Sands (NYSE:LVS), Wynn Resorts (NASDAQ:WYNN), and MGM Resorts International (NYSE:MGM). All operate big, glitzy resorts in the now-crowded Macau market, and all manage casino assets.

These three tough competitors are also veterans at this game, and are usually profitable. 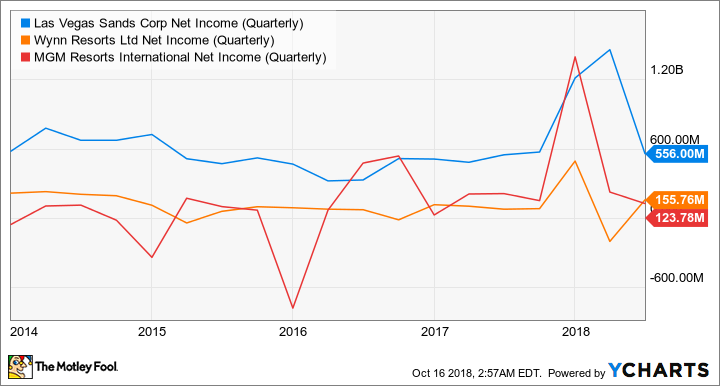 Studio City might be a fun place to spend some time and money, but Studio City International as a stock doesn't feel like a good gamble. It seems small and limited next to its publicly traded peers. The stock might have some novelty attraction as a casino-ish title once it hits the market, but I wouldn't expect it to hold much long-term investor interest.

Studio City International is offering 28.75 million ADSes, collectively representing 115 million class A ordinary shares of the company, in the IPO for an estimated $10.50 to $12.50 per ADS. The stock is slated to start trading on Thursday on the NYSE under the ticker symbol MSC.

The underwriters of the issue are Morgan Stanley, Credit Suisse and Deutsche Bank Securities.