At one time, NVIDIA (NASDAQ:NVDA) floated under the radar in the technology sector. Its graphics processing units (GPUs) were then niche tech products that appealed mainly to graphic artists and hardcore PC gamers, but that all changed over the last five years.

Today, cloud providers like Amazon.com, Microsoft, and Alphabet are accumulating massive amounts of data, and the GPU has proven to be very adept at handling large workloads. This has made NVIDIA a major player in the booming data-center market. Over the past year, NVIDIA's data-center revenue has grown 89% to $2.568 billion, and it could become the company's largest segment over time.

Meanwhile, the gaming segment has flourished along with a surging video game industry that has driven strong demand for NVIDIA's GeForce graphics cards. Despite the strong growth from the data-center sector, gaming is still NVIDIA's main business and made up 57% of the company's trailing-12-month revenue. 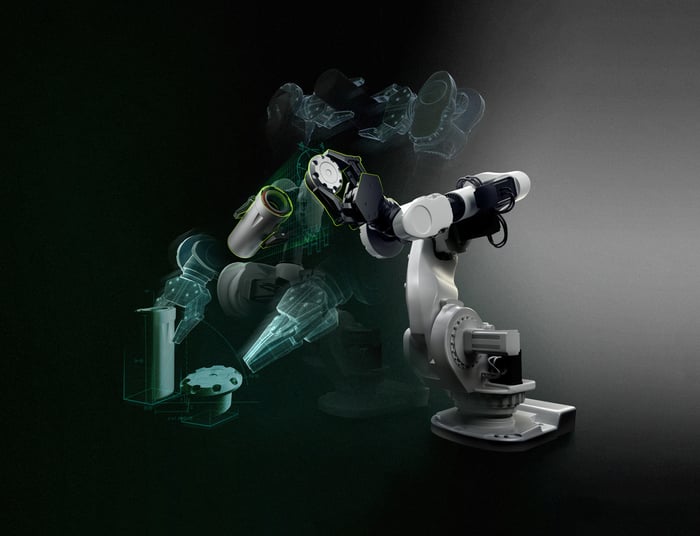 NVIDIA is firing on all cylinders right now. Five years ago, not very many foresaw NVIDIA's success at applying its core graphics processing technology to major industries outside of gaming. That's why the stock has climbed 1,500% over that time. But what about the next five years? Will the company still be dominant, or are the easy gains over? Let's take a look.

NVIDIA hasn't had to deal with much competition recently. Its main graphics rival, Advanced Micro Devices (NASDAQ:AMD), trails NVIDIA in spending on research and development, which has allowed NVIDIA to remain a step ahead. NVIDIA has controlled more than 50% of the discrete GPU market since 2005, with AMD holding the balance. 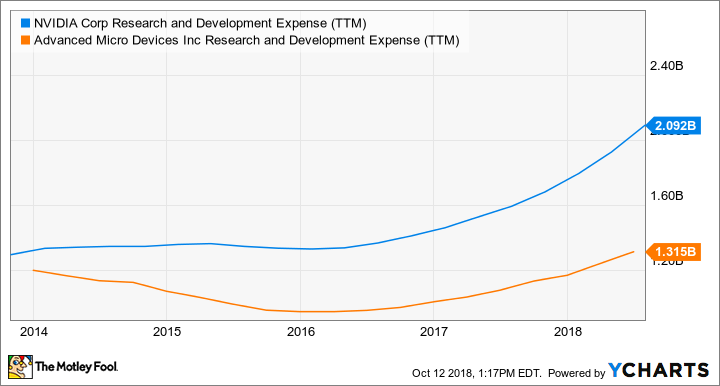 In the data-center market, NVIDIA's growth ranged from 71% to more than 100% over the last four quarters. That growth comes at a  much faster clip than AMD's enterprise segment, which includes sales of its EPYC central processing units (CPUs) for servers.

Facebook, Alphabet, and Amazon are using deep learning and inference technology to take all of the data stored in their respective cloud servers and make predictive suggestions for users, such as recognizing faces in photos or recognizing voices. While CPUs are still needed in data centers, more spending has shifted to GPUs. The CPU can only handle sequential processing tasks, whereas the GPU can process multiple streams of data simultaneously. This makes the graphics processor a much better option for tech giants, which plays to NVIDIA's core strengths.

NVIDIA also looks solid in the self-driving car market with its DRIVE car computer, which is powerful enough to run a fully autonomous vehicle and is about the size of a license plate. The graphics specialist has more than 370 partnerships with various car makers and software companies working on driverless vehicles, which include leading industrial vehicle suppliers like PACCAR, ZF, and Bosch.

As for the stock, NVIDIA trades for a trailing P/E ratio of 34, which is not that expensive given its recent 40% growth in revenue and 90% growth on the bottom line. There are potential headwinds, however, that could make growth tougher for NVIDIA over the next five years.

Its main competitor in the gaming industry, AMD, continues to nip at NVIDIA's heels. AMD is currently on schedule to release its 7-nanometer GPU within the next year, which will compete with NVIDIA's recently launched Turing graphics cards.

Furthermore, we can't forget Intel, which is reportedly working to launch its own stand-alone GPU by 2020. That definitely creates some uncertainty, especially if Intel is able to design a high-performance graphics chip that operates very efficiently with its CPUs. That could potentially create a very competitive offering in the data-center market, not to mention gaming.

Beyond gaming and data center applications, the most competitive market for NVIDIA might be self-driving cars, where it's racing against Intel's Mobileye unit, as well as Alphabet's driverless technology. We also don't know what Apple might be up to, even though it has been conducting self-driving-car tests. It's possible other companies could develop new technologies that are better suited than graphics processors for self-driving cars as well. For example, Tesla ditched NVIDIA's DRIVE PX system in favor of its own chip, which Tesla CEO Elon Musk claimed was 10 times faster than NVIDIA's technology.

While its wise for investors to stay mindful of those risks, NVIDIA continues to find new markets in which to apply its GPU technology, such as medical imaging (a $100 billion industry), robotics, and the Internet of Things (IoT).

NVIDIA management estimates its total addressable market is more than $75 billion across data center, automotive, robotics, IoT, and medical imaging. That doesn't include gaming, which grew 52% year over year in the second quarter.

With the company still uncovering new applications for its core GPU technology, it's very difficult to know exactly what NVIDIA's growth opportunity really is. In 2013, IBM estimated that 90% of the world's data had been created in the previous few years, just to give you an idea how fast data is growing. This trend spells an enormous opportunity for NVIDIA that I believe is nearly impossible to quantify.

Despite the stock's rapid rise and its large $160 billion market cap, I wouldn't be surprised if NVIDIA is still hitting new all-time highs five years from now.

Where Will NVIDIA Be in 5 Years? @themotleyfool #stocks $NVDA $AMD Next Article
Current