Euronet Worldwide (NASDAQ:EEFT) reports-third quarter 2018 earnings on Friday, Oct. 19 before the markets open for trading. Stock in the Leawood, Kansas-based transactions provider has returned 37% year to date, more than seven times the broader market's return of 5% as represented by the S&P 500 index. To grasp both the company's current growth catalysts and constraints, I'll review three key themes investors should be familiar with heading into Friday's earnings report.

1) A new twist on a core business driver

In the first six months of 2018, Euronet improved revenue by 16% compared to the prior-year period. It did so by capturing higher customer volumes while widening its ATM and money-remittance location networks. In August, during the third quarter, Euronet purchased 167 ATMs from Polish financial-services provider Aplitt, S.A. and entered into an outsourcing agreement that allows it to operate 304 of Aplitt's "SKOK24"-branded ATMs.

The Aplitt agreement follows two outsourcing deals that Euronet secured in the first half of the year. The company added 193 in-branch ADTs (automated deposit terminals) that were owned by Credit Agricole in Poland, and 260 Piraeus Bank ATMs in Romania. Thanks to the three agreements, Euronet now operates more than 750 outsourced ATMs in Europe.

The outsourcing business could develop into a lucrative niche for Euronet. Outsourcing allows banks and financial institutions to remove ATMs from their balance sheets while retaining their own branding. Euronet itself boasts the balance sheet strength to gobble up more ATMs from banks: The organization's short-and-long-term debt of $991 million is only about 2.5 times trailing-12-month EBITDA. Moreover, it has zero net debt on its books. 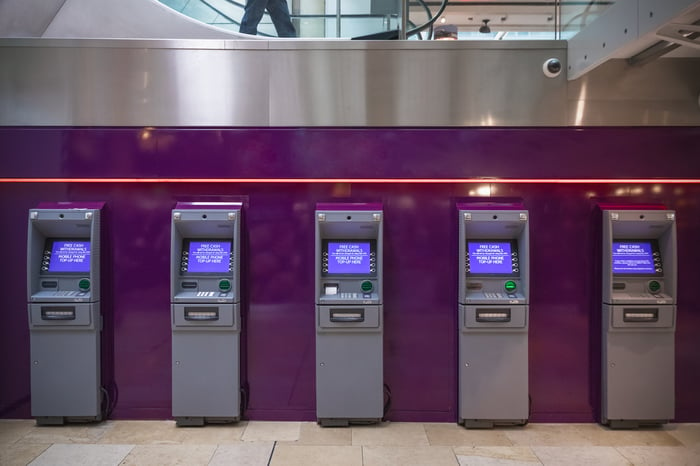 2) Potential rejuvenation of the epay business

Over the last several quarters, growth in epay has lagged EFT processing and money transfer, as the demand for mobile airtime-refill services has declined. For example, during the second quarter of 2018, EFT and money transfer booked year-over-year top-line increases of 25% and 21%, respectively, while epay's revenue advanced by just 1%. The company blamed epay's relatively meager results partially on the loss of a high-volume, low-margin customer in the Middle East. Nonetheless, the last quarter is indicative of the overall recent trend.

The segment is focusing on revival through its next generation of services. Epay has consummated a wide variety of deals in recent months. It inked an agreement with Amazon.com to launch a gift-card mall on the company's German e-commerce site, Amazon.de, and delivered a software platform to Sony's North American subsidiary to enable it to deliver gift codes to major retailers. A revenue improvement in the mid-single digits this quarter would represent progress in epay's ongoing transformation.

As I explained earlier this year, Euronet's future earnings have been under a slight cloud as the European Union (EU) explores the regulation of dynamic currency conversion, or DCC. DCC allows an ATM customer traveling in a foreign country to conduct a transaction in his or her own base currency. The fee for this service can range from the low-single digits to the mid-teens. The technology has provided a profitable income stream to Euronet over the last several years, although three separate EU bodies are currently studying pricing regulation that could be implemented by 2022.

Even as this cloud looms, new opportunity in DCC has materialized. In early October, Euronet confirmed that Visa Inc (NYSE:V) will allow DCC on ATM transactions globally, effective April 13, 2019. Previously, Visa had confined DCC to global point of sale transactions and ATM transactions within Europe. Euronet already offers DCC for Mastercard-issued cards within both its own 41,000-plus ATM network and is the Mastercard DCC service provider for an additional 125,000 global bank-operated ATMs.

Expect management to discuss the new Visa DCC expansion in detail on Friday's earnings conference call. As for the overarching DCC laws that may come into effect, management expressed optimism last quarter that DCC might escape regulation in Europe. This is because at least one of the three EU entities charged with addressing the issue, the EU Council, believes that fee transparency is preferable to pricing regulation.

If final laws favor and are limited to transparency, the new Visa DCC revenue won't be offset by forced fee decreases. This will give Euronet access to a vital source of growth over the next two to three years.