General Motors (NYSE:GM) will report its third-quarter earnings results before the U.S. markets open on Wednesday, Oct. 31. Will GM have a treat for investors on Halloween -- or a fright?

A year ago, GM posted a whopper of a net loss (about $3 billion) after taking $5.4 billion in one-time charges related to the sale of its German subsidiary, Opel AG, to French automaker Peugeot SA. But its underlying performance was pretty good: Excluding the effects of one-time items and Opel's results, GM earned $1.32 per share in the third quarter of 2017 on revenue of $33.6 billion.

Wall Street thinks that GM's revenue may improve year over year, but it may fall a bit short of that earnings number this time around. Analysts polled by Thomson Reuters expect GM to report adjusted earnings per share of $1.26, on average, on revenue of $34.84 billion. 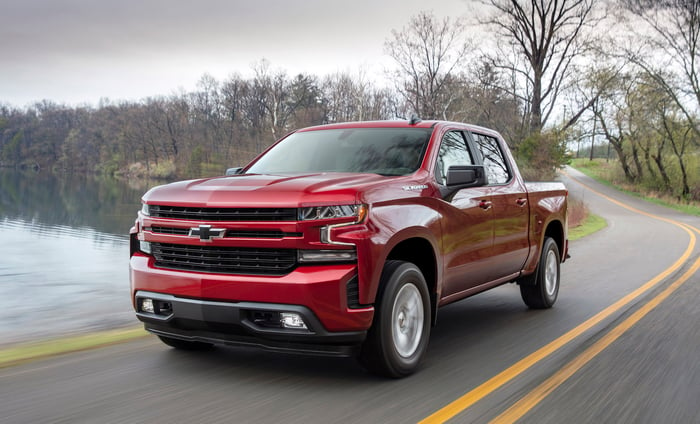 GM has just begun rolling out all-new versions of its big-selling Chevrolet Silverado and GMC Sierra pickups. Tight supplies hurt sales in the third quarter, but the new trucks should give GM's profits a boost next year. Image source: General Motors.

How GM's sales fared in the third quarter

GM's sales in the U.S. generated mixed results in the third quarter. On the one hand, the headline number wasn't good: GM's sales were down 11.1% from the third quarter of 2017, a drop much steeper than the overall U.S. market's 2.2% decline. But GM kept its incentives in check, managing an average transaction price of just under $36,000 -- up $700 from a year ago.

Simply put, in the U.S., GM is making hay on strong sales of crossovers and large SUVs while it's in the midst of a changeover to all-new pickup models. Tight supplies of its big-selling Chevrolet Silverado and GMC Sierra pickups had a lot to do with the year-over-year sales decline, but the continued high demand for its crossovers -- most of which were all-new in the last couple of years -- and big SUVs helped keep prices strong.

How will that translate to GM's financial results? We may see a small year-over-year decline in GM's profit in North America, but the region's margin could beat the solid 8.3% it posted a year ago.

In China, GM's sales fell 14.9% in the third quarter from a year ago. Overall market trends had a lot to do with the decline: New-car sales have slowed significantly in China over the last few months on consumers' concerns over the China-U.S. trade war and a slowing domestic economy. Looking at GM specifically, its crossovers did well, but sales at Buick, GM's best-selling brand in China, fell almost 20% as GM shifted several models to new, smaller engines.

The upshot there is that GM's equity income from its Chinese joint ventures could fall short of the $459 million it brought home in the third quarter of 2017.

What to watch: Will GM maintain guidance?

Back in July, GM cut its guidance for the full year, citing two sets of "macro challenges." First, the costs of some key commodities (steel and aluminum in particular) have risen significantly over the last year, increasing GM's costs in ways that it can't easily pass on to consumers. Second, currency devaluations in Brazil and Argentina largely offset the gains it had made by restructuring its South American operation over the last couple of years.

Commodity prices continued to be high through the third quarter, as GM faced an additional "macro challenge." As noted above, the U.S.-China trade spat has put a damper on GM's sales in the hugely important Chinese market.

GM's July guidance change sent its shares reeling. If GM is forced to adjust guidance again next week, it will probably have a similarly unpleasant effect on GM's share price.

Given all of the above, it won't be a surprise if GM's adjusted earnings per share falls short of last year's result despite good execution on the company's part. I'll be looking deeper for answers to these questions:

The answers to those questions will help give us a better idea of the road ahead for General Motors.