These fast-growing stocks are awesome picks regardless of what the market does.

First, thanks are in order.

Thanks to all those who frantically sold stocks over the last week or so. It added to the overall stock market pullback. And that gave me a chance to buy two great stocks at a better bargain price than I otherwise would have.

Yes, while the market was falling, I was buying. In particular, I was scooping up shares of MongoDB (MDB -9.71%) and Teladoc Health (TDOC -5.33%). Here's why these two stocks were at the top of my list to buy on sale, and why they're still great picks no matter what the market does next. 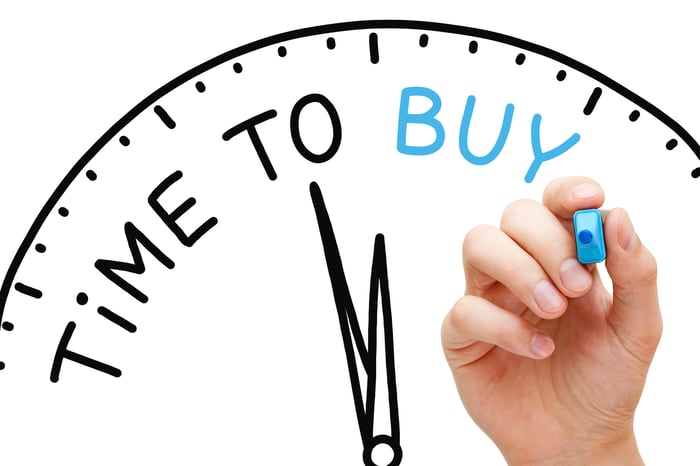 I wrote last month that if I could buy only one stock to add to my portfolio, it would be MongoDB. Now I've put my money where my mouth is -- or at least was.

To understand why I like MongoDB so much, we need to get a picture of the current database market. The major databases built by market leaders like Oracle and Microsoft were designed decades ago. Back then, the world of data was a structured one where everything could be neatly arranged in rows and columns, as in a spreadsheet.

When these market-leading databases were initially developed, the cloud was something you looked up in the sky to see and not a far-flung network of remote servers hosted on the internet. If a company needed a database, it stuck a server in a room in one of its offices.

As the world changed, the major companies tried to change their databases, too. But it's kind of like adding a second floor to your one-story house: It can be done, but it's a lot easier and cleaner to just build a new house. MongoDB did the equivalent of building a new two-story house.

MongoDB was founded by the same team that started leading internet advertising company DoubleClick, which was acquired by Alphabet (then known as Google) in 2007. This team personally experienced the hassles of trying to use current databases to meet the demands of the 21st century. So after selling DoubleClick, they set out to build a database that was ideal for handling both structured and unstructured data and could store it anywhere -- locally or in the cloud.

The company is growing like crazy, with revenue over the last three years increasing by a 58% compound annual growth rate (CAGR). And MongoDB's revenue is the kind investors should love: recurring revenue based on a subscription model. Disrupting the database world has paid off well for MongoDB so far.

Meanwhile, Teladoc is disrupting an entirely different market. The company ranks as the largest provider of virtual healthcare services in the world.

Years ago, physicians would actually make house calls. The practice fell by the wayside over time, but it still makes sense. After all, why would anyone who is sick want to get dressed and go out, sit in a waiting room with lots of other sick people, and finally see a doctor for maybe 15 minutes? Of course, the doctor's office must be open in the first place to even go through this hassle.

Teladoc allows patients to talk with a qualified healthcare professional via phone, internet video, or mobile app -- from anywhere, 24 hours a day, 7 days a week. The company can handle a wide range of healthcare needs, including treating colds and flu, allergies, dermatology indications, behavioral health issues, and more. Roughly 92% of medical problems are resolved on the first virtual visit.

While Teladoc's convenience appeals to patients, its cost savings appeal to employers and insurers. It's not surprising that 40% of the Fortune 500 are Teladoc customers and that more than 35 of the largest health plans in the U.S. steer members to the company's virtual healthcare services.

Teladoc's revenue has increased by a 75% CAGR since 2014. The company continues to expand through acquisitions, with its buyouts of Best Doctors and Advance Medical helping to more than double year-over-year revenue in the second quarter of 2018. But Teladoc's organic growth is also very impressive: 39% in Q2.

Both companies are still relatively small, with market caps below $5 billion. Both also have tremendous growth prospects. MongoDB hasn't scratched the surface of its potential market. The use of telehealth is still getting cranked up in the U.S., and there are many international markets that remain largely untapped. Teladoc is set to capitalize on these opportunities.

I'm glad the market gave me an opportunity to buy MongoDB and Teladoc at a discount. But the truth is, I would have bought these two stocks even if the market hadn't pulled back. And regardless of what gyrations we might see with the stock market over the next few months, I plan to add to my positions in both of these disruptive stocks.