For years, railroads have been considered a slow-and-steady business. You hold onto their stocks forever because they grow gradually and create investor returns through dividends and buybacks.

Over the past few quarters, though, Canadian Pacific (NYSE:CP) has been shattering that perception. Volume growth on its network has been climbing faster than management initially anticipated, and the company has been investing in its network to ensure that it can handle those volumes without compromising operating margins. This third quarter was the realization of those investments as the company posted record revenue, earnings, and third-quarter margins.

Let's take a look at the railroad's fantastic quarter and see if Canadian Pacific can continue these kinds of results into the future. 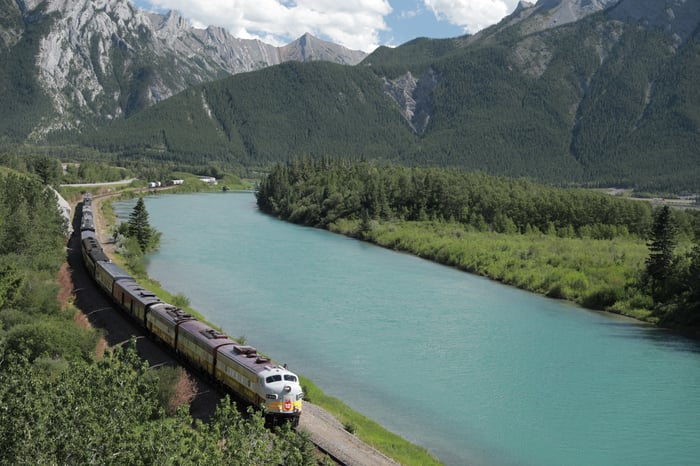 Record revenue and earnings are all great things to hear from an investor's perspective. What is truly astounding about this past quarter, however, was the fact that Canadian Pacific was able to deliver those results while also recording an operating ratio (the transportation industry's term for operating margin. The lower the number, the better) of 58.3%. Earlier this year, Canadian Pacific's operating ratio ticked up from a few bottlenecks, which suggested that perhaps its network was running at capacity and would require lots of investment to meet demand.

Yet that doesn't seem to be the case, as management noted that its fuel-efficiency metrics were the best the company has ever recorded and equipment rental expenses -- an expense that runs high when capacity is strained -- were down compared to this time last year. Keep in mind that Canadian Pacific's operating ratio for the first nine months of 2018 is still higher than the 2017 period as a result of those network constraints in the first two quarters. 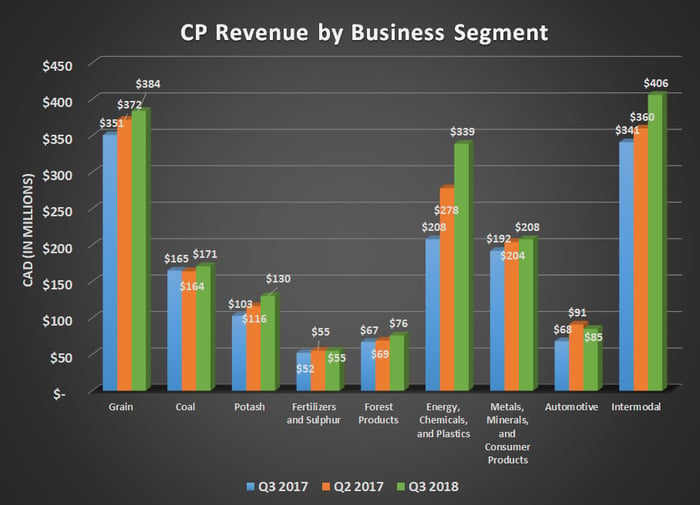 The combination of good operating results and incredibly strong volume results in its three largest segments -- grain, energy, chemicals and plastics, and intermodal -- led to a 17% increase in foreign-currency adjusted revenue and a 24% increase in earnings per share. Those aren't typical growth numbers you would expect from a railroad company.

The company's results thus far have given management enough confidence to raise its full-year guidance during its investor day conference on Oct. 4 as well as announce a share repurchase program to buy back 4% of all shares outstanding on Oct. 17.

U.S.-China trade tensions? Not our problem

Railroad companies are very much a proxy for both economic growth and commercial trade. Today, any conversation with the word "trade" tends to have the word "tariff" in it as well. The prevailing thought is that the tit-for-tat tariff spat between the U.S. and China is going to impact railroads, with some analysts going so far as to say that Canadian Pacific will suffer a lot because of its heavy traffic going to its Vancouver port terminals and the amount of goods it delivers to the Asia-Pacific region.

So when asked what tariffs could do to Canadian Pacific's business, CEO Keith Creel was quick to step in to downplay the impact it could have on CP.

Asia is China, Asia is Indonesia, Asia is Japan, Asia is Korean, Asia is India, etcetera. It's not just China. In a world of trade relations, I think another critical point when you think about CP, a predominately Canadian based railroad, Canada's not at odds with China.

It's not a Canada-China trade war. The majority of our revenue at CP originates and terminates in Canada. Not in the US. And then thirdly, if we want to get more specific, and I think it's important that we do, when we speak to China, China specific to CP, and that's for the entire network, both U.S. and Canada, is 12% of our revenue. And if I want to get even more specific, China direct to the USA is less than 5% of our revenue. So for anyone to suggest that this railway is heavily weighted to China, the most heavily weighted railway in the industry to China is just ill-advised and not fact-based.

You can read the entire transcript of Canadian Pacific's conference call on fool.com. 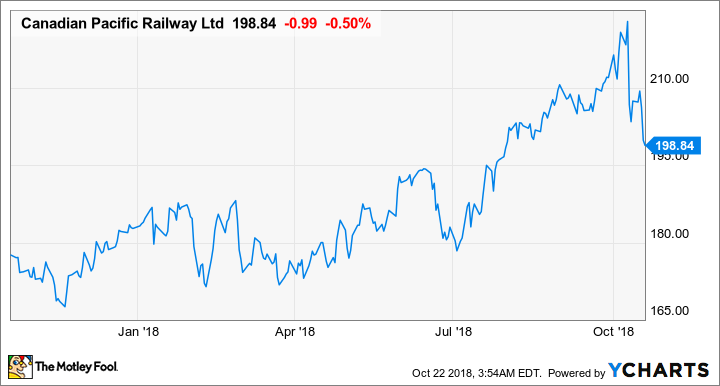 A railroad company delivering earnings growth like this is almost too good to be true. Considering the capital intensity of the business, the cyclicality of some revenue sources, and the fact that railroads are a barometer for economic health means that investors shouldn't' get too used to these kinds of results. Canadian Pacific even said on the call that this was a bumper crop for grain this year, so this is about as good as it gets for that particular segment.

There are, however, some portions of the business where we can expect continued growth for some time. Management noted on its investor day presentation several hundred acres of land it acquired at or adjacent to its major terminals to grow capacity as well as new grain hoppers that will allow CP to move up to 40% more grain per train. These kinds of investments should allow the company to keep growing at a decent clip. Couple that with management's intention to buy back about 4% of shares annually and its dividend and Canadian Pacific could continue to put up growth numbers that are much higher than you would expect for your prototypical railroad investment.