If you took a peek at New Oriental Education and Technology Group's (NYSE:EDU) stock on Tuesday, you might have thought the Chinese tutoring giant was going out of business. The stock closed the day down 16% -- over 50% lower than its June highs -- after reporting earnings. Fool.com contributor Steve Symington reported that investors were disappointed that earnings missed analyst expectations and that guidance was not stronger.

But shareholders shouldn't lose hope. While the stock fell, the underlying company remains very solid. And while profitability may be slowing, it's because management is laying the groundwork for a long-term moat to protect the company. 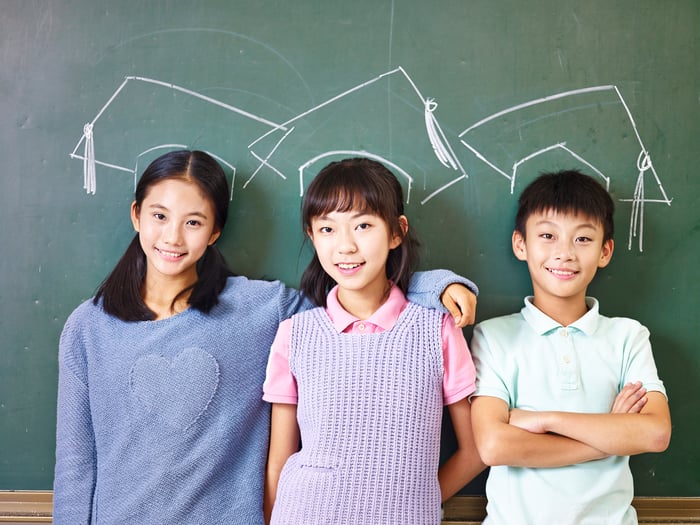 Before we dive into the weeds of the company's quarter, let's review the headline numbers.

It's also worth noting that enrollment -- the lifeblood of any for-profit educator -- was up 13% in the quarter to 1.74 million students. This came on the heels of a 45% increase in enrollment last quarter, giving an impressive 28% growth for the combined two-quarter time frame.

While revenue growth of 30% is a huge positive for a company that's already worth over $8 billion, some investors might be worried that earnings are growing at a much slower clip, 13% in the reported quarter. On that front, however, there are two very reasonable explanations.

The first has to do with the company's rapid expansion in China. Seeing a chance to corner part of the market for after-school tutoring -- both in-person and online -- New Oriental has enacted an aggressive expansion plan into China's second- and third-tier cities. Over the past 12 months, for instance, the total square meterage of the company's locations increased 34%. It not only costs a lot to open and develop those sites, but it takes time for them to reach capacity and gain the level of profitability more mature locations already enjoy.

The second major factor has to do with the summer promotion the company used to draw students and their families into the company's ecosystem. Offering significantly reduced starter prices, New Oriental signed up 762,000 additional students via the promotion -- an increase of 38% from the same promotion last year. Time has shown that these students tend to stick with New Oriental and pay full price once the promotion ends.

These two forces combined to pull gross margins down by 186 basis points to 57.27% in the quarter. Non-GAAP spending on selling and marketing, general and administrative, and research and development all outpaced revenue growth as well, further cutting into profitability.

But it's important to remember that these moves are laying the foundation for the future. With $3.1 billion of cash on hand and zero long-term debt, New Oriental is leveraging its head-start in after-school and online tutoring to capture as much long-term market share as it can. If the company can lock students and their families into its ecosystem, it could provide huge returns further down the road.

As founder and Chairman Michael Yu highlighted in a prepared statement, all of the company's major divisions are showing impressive growth:

Here's a rundown of other important news from the company's quarter:

For the current quarter, management expects revenue to come in between $568.5 million and $586.4 million. That represents growth of 22% to 26%. However, if we back out the effects of foreign exchange fluctuations, revenue growth would actually be higher: 27% to 31% year over year.