If you end up with fever, chills, aches, pains, and a runny nose because of the flu this year, you may have a new weapon you can use to fight back.

On Wednesday, the Food and Drug Administration approved Roche Holdings' (OTC:RHHBY) new flu pill Xofluza, about two months earlier than anticipated. The single-dose treatment can help flu symptoms disappear faster, and that could make it one of this flu season's best-selling medicines. 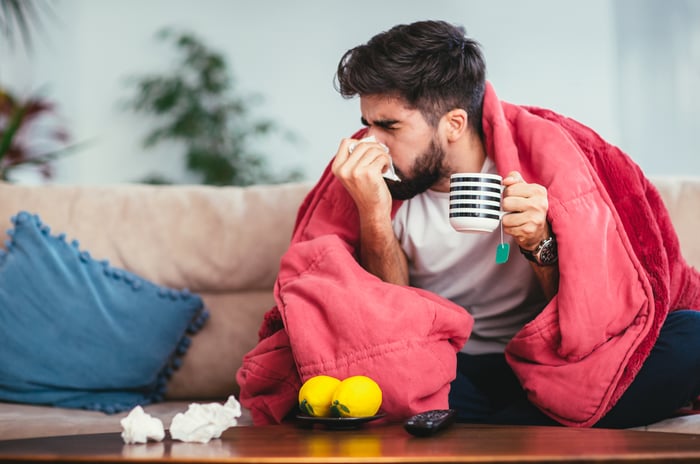 Everybody knows the flu is common, but what you may not realize is how many people are hospitalized or die every year because of it.

Altogether, the economic impact of the flu is massive. In the U.S., the CDC estimates that every year workers miss out on $16.3 billion in earnings because of the flu, and the healthcare system spends over $10 billion on direct medical care for flu sufferers.

The best way to battle back against the flu is prevention. But once you notice an onset of flu symptoms, you can now be prescribed Xofluza or Tamiflu, a drug that's been on the market since 1999.

In clinical trials involving more than 1,400 people, a single oral dose of Xofluza reduced the duration of the flu by more than one day when compared to placebo. The flu lasted a median 53.7 hours in patients receiving Xofluza, but in patients receiving a placebo, it lasted over 80 hours. Fever also subsided faster, lasting a median 24.5 hours in Xofluza patients versus 42 hours for the placebo group.

Xofluza and Tamiflu both shortened flu symptoms similarly in trials; however, patients taking Xofluza may become less contagious more quickly. The length of time influenza virus continued to be shed by the body was 24 hours for Xofluza patients and 72 hours for Tamiflu patients.

Billions of dollars in lost wages and direct medical costs make patients, employers, and health insurers willing to cover the cost of flu shots that may prevent the flu, and flu treatments that can get people back on their feet faster. As a result, drug manufacturers pocket hundreds of millions of dollars in sales from these treatments. For instance, Tamiflu sales totaled $334 million this year through September, at current exchange rates; at its peak, Tamiflu sales approached $1 billion per year.

It's anyone's guess how much money Xofluza will bring in for Roche, but based on Tamiflu's success, it wouldn't be surprising if this flu-fighter becomes a nine-figure drug too -- especially if the flu season is particularly bad this year.

It's Official: The Flu Has a New Enemy @themotleyfool #stocks $RHHBY Next Article
Current