Check Point Software Technologies' (NASDAQ:CHKP) third-quarter earnings were pretty much in line with what management had planned. Let's take a look at the details behind Check Point's third quarter and what it says about the future direction of the company.

There's nothing to complain about from the headline numbers, but the guidance numbers look a little uninspiring.

That said, the devil is in the details and Check Point is a company in the process of making some subtle but significant changes to its market strategy.

Management has been highlighting the opportunity for Check Point to benefit from so-called fifth-generation security threats. In a nutshell, these are highly sophisticated security threats whose complexity means they can attack multiple platforms at once. For example, they could be hidden in network traffic and disguised as content files.

Check Point believes such threats are best addressed with holistic security architecture that provides a unified security approach across many platforms. The company's fifth-generation security solution is Infinity, but the problem with selling such a high-level solution is that it usually requires a relatively senior-level executive to make the decision and understand the solution and get budgetary approval.

Given this situation, Check Point has had what CEO Gil Shwed described as "execution challenges," particularly in the U.S. These issues extended from the third quarter of 2017 until the second quarter of 2018, when Shwed reported "a good level of activity and results."

Fast-forward to the current quarter and Shwed sounded a more bullish tone, saying on the earnings call, "I think Infinity so far is generating a very nice pipeline. We're still closing only a small number of deals because it takes a very long time for a company to make a decision about the long-term commitment and about a change of an architecture. But we are seeing that change is starting to happen."

In other words, Check Point appears to be executing better on its aim of developing Infinity sales.

It's a good idea to keep an eye on Check Point's composition of sales. In the past, products and licenses sales led software updates and maintenance sales, but that relationship has been altered by the shift toward subscription-based sales in the software industry. As you can see below, product and licenses sales have fallen five quarters in a row. 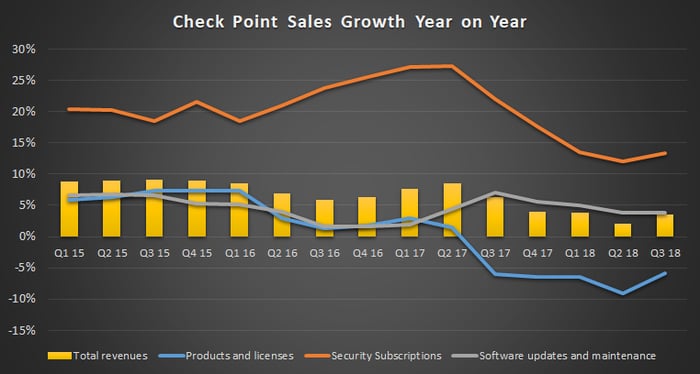 When an analyst asked during the earnings call about product sales, CFO Tal Payne had a very interesting answer: "... Most of the new things are subscription. Having said that, product can and should be positive and that's what we're talking about, continued improvement on the execution of their fields."

She went on to add that her goal was to see product sales turn positive in the future -- something to look out for in future quarters.

Check Point beat its projections in the quarter. Investors will be looking for more of the same in the coming quarters while keeping an eye on whether Check Point can build more traction with Infinity sales and return to product sales growth.